previous
[Geek Deals] 365 days of PlayStation Plus for only £19.99 from Game.co.uk
random
next
Shipping: Most of it I just don't understand

After musing over what would be good blog fodder for a while, I thought that, maybe, just maybe, a good old moan would be a good place to start! It’s universally known that a problem shared is a problem halved and that generally a good moan unites humanity! AMEN!

“So what is going to be today’s moan?” I hear you ask. Today’s moan would be about people ruining a story line by talking about the ending before you have in fact reached the ending in question.

I think that we can all relate to this, I am sure at some point in the last year someone somewhere has ruined the ending of a film, book or game that you were really looking forward to. Generally, I find that this tends to be films and that usually the conversation begins with an excitable “O.M.G!” (For some reason at this point you would visualise an American accent and multiple exclamation marks.) “Yeah that film was amazing! There was a massive twist at the end, I don’t want to tell you too much but…” 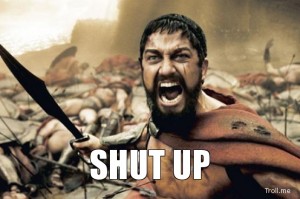 At this point we need a mute button.No matter how forcefully or colourfully you tell them to shut up some titbit is released.

This release of some juicy info, for some, can ruin a whole film. Example; My other half refuses to watch Shutter Island because someone told him that (spoiler) “It turns out that Leonardo DiCaprio’s character is insane.” Anyone who has watched Shutter Island knows that there is a message beyond that. But my other half still refuses to watch this film for the pure reason that someone blabbed about Leo’s sanity.

A note on my partner is that he will happily watch a film multiple times. So where’s the logic? Surely it is just like watching the film for the second time, instead of the first?

Well to be honest, I myself am not all too concerned about people spoiling the ending of a good story in this way; in fact I do like to make a habit of reading film synopsis’ online whilst watching a film and have always read the last page in a book before starting it to see who’s still alive. 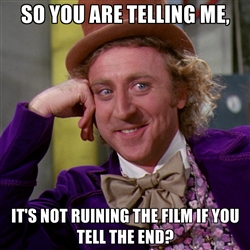 Personally my grievance lies in those who recommend something by telling you “It’s awesome! You should check it out. The endings a bit naff though.” This on one particular occasion has affected me far more than it probably should. I am a lover of reading Stephen King so a friend recommended The Dark Tower Series to me, the story line has been a web of mystery and wonder that I have thoroughly enjoyed untwining throughout the first six books. It has been one of the greatest adventures of my life. The thing is. The friend who recommended them, months later, when she had finished the series herself, informed me that “The end was an absolute disappointment.” So now I am stuck helplessly staring at the final book in the series, the end of the adventure, hoping and praying that it isn’t a terrible ending but not having the strength to find out!

I feel like one day I should finish The Dark Tower series but I need to get past this mental block that stems from not wanting to be disappointed. Maybe one day…