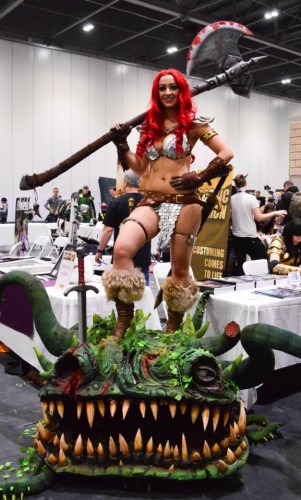 I think I’ve now reached the point where I’m a con veteran… having been to too many to count, and having lost track utterly of what happened where and when. Granted, this may have something to do with most of the cons I attend being held at the ExCel Centre in London- and even if they’re not, all convention halls look the same on the inside anyway.

One of my biggest revelations about conventions is how much it reminds me of getting married. In the weeks before, you plan everything meticulously: you get everything booked and the minute-by-minute itinerary of the entire weekend sorted, you spend more time panicking over what you’re going to wear than you do at work. And then the time comes and there’s an alarming amount that’s not finished, not completely perfectly planned. But it doesn’t matter, what matters is that everyone’s here and we’re gonna have so much fun.

Or at least that’s how it is for me. But then I was a relatively low-maintenance bride and, as I’ve come to accept, not a “natural” cosplayer. I like dressing up, having my photo taken, sure, love it! But when I’m painstakingly working on a costume, there’s always a little voice in my head that says “I hate to interrupt while you’re working so hard, but… I thought we were a writer?” We are, I think to myself, but we’re a writer who cosplays. “Oh yes?” says the voice, “How’s that comic coming along?”

With the benefit of hindsight, foregoing sleep and regular meals in an attempt to build an Aeryn Sun trenchcoat from scratch whilst also working seven days straight at my regular job, may -MAY- have driven me a little bit mental.

Anyway. LSCC 2015. Let’s recap this quickly so I can start work on my cosplay for the next con, because if there’s one thing Laura Maier does not do, it is learn from her mistakes. Because Words Are Hard, I will attempt to make the experience more pleasant by adding lots of pictures by Gabrielle Maier Photography. 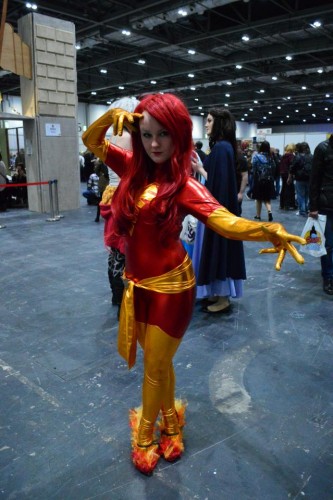 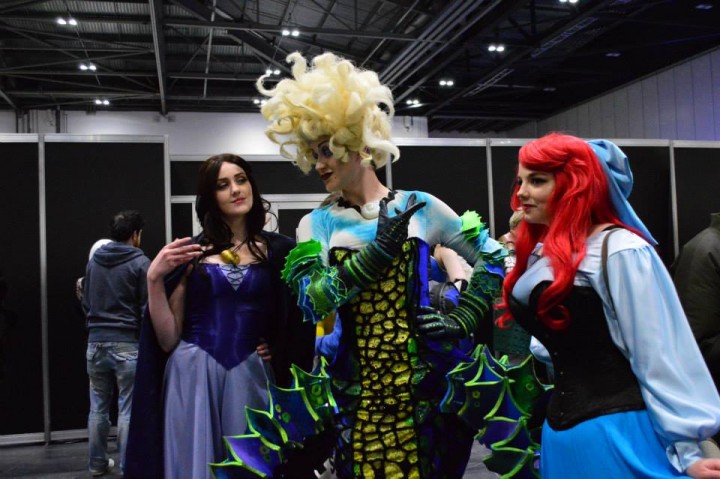 “This bitch, amirite?” – Kyokyo as Vanessa, RossECobb as Ursula, Dewnor as Ariel

Even though the con itself didn’t start officially until Saturday, Friday was the pre-party, the day when everyone turned up, met up, and got drunk. And everyone did last-minute cosplay work while maintaining an unconvincing pretense of having it All Under Control. Everyone. Anyone who says they didn’t is a craven liar and should be flogged. 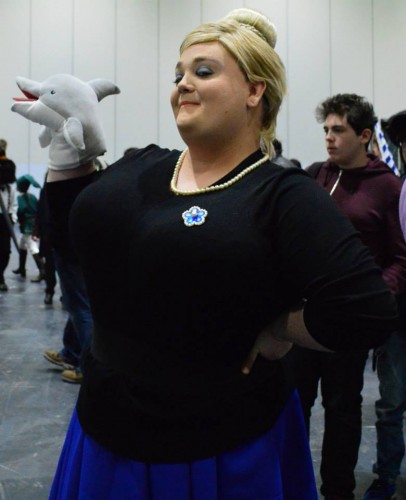 THERE WAS A PAM! I WAS SO HAPPY AT THE PAM!

The trip was pretty standard as trips go- my sister Gabi deciding it would be funny to screw with me by pretending she got the days mixed up, a confusing and frustrating walk to our hotel… the sort of things that happen every time I go on a trip. Once we were in the room, we had a visit from the resident beard, Mike Orvis, where we recorded an episode of the Gentlemanly Chats podcast, and filmed an as-yet-unreleased issue of Laura Reads. 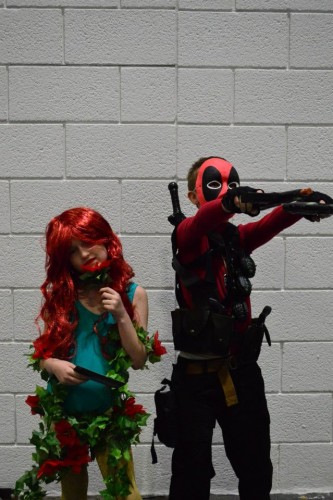 Poison Ivy and Deadpool up to mischief!

The pre-con shindig is as important a part of the experience as the con itself, and– oh who am I kidding, I just shoehorned this in here so I had a platform to shamelessly plug stuff. I regret nothing!

EVERYTHING IS AWESOME! Get it? Because Lego?

On Saturday morning, my sister and I were joined by my husband and our friend Jessie, because somewhere in the planning stages I thought having four people sleep in a double room would be a good idea. I make poor decisions, ladies and gentlemen. 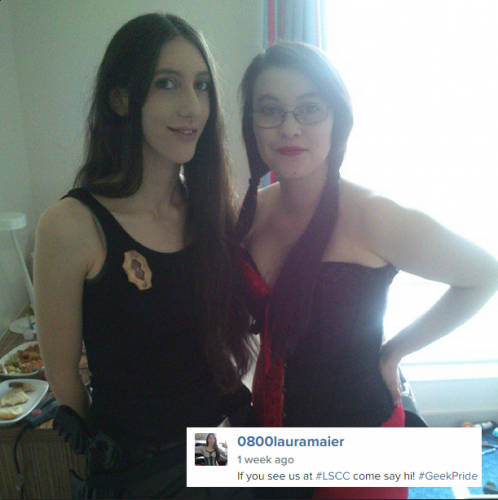 Me as Aeryn Sun and Gabi as Harley Quinn

Conventions make you say some ludicrous things. In the queue for the ATM -which, incidentally, was longer than the queues for some of the panels- I was stood behind a girl with the most perfect shade of MJ-red hair. “Do you think that’s her real hair?” I whispered to my husband after intense staring at the back of this poor girl’s head had failed to enlighten me. I was so consumed by this dilemma that I accidentally took out £200 instead of £20. At some point in this article I will try to find an excuse for how I ended up spending it all. 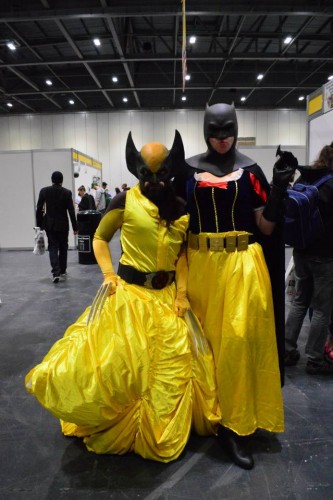 One of the panels highlighted on my extensive itinerary was the “Pitching to Editors” panel, which in spite of the gentleman leading the panel introducing esteemed writer Ron Marz with “he has drawn many of the comic book characters you know and love” -awkward- was actually quite informative. I could summarise my notes from the panel here for the curious, but instead I will recommend you get your hands on Brian Michael Bendis’ “Words for Pictures”, which reinforces everything said in the panel and then some. 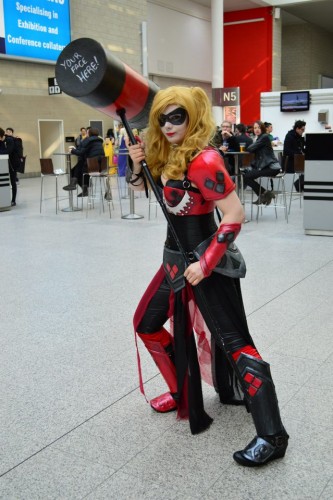 “If you want food, you’ll have to go through me!” – Sian K1tt3h as Harley Quinn. We didn’t get food.

The London Super Cosplay Championship semi-finals were epic, of course. My guilty favourite was Faust’s Suicide Squad Harley Quinn crossplay, who lip-synched to Adore Delano’s “Hello, I Love You” as his corset began its inevitable descent; a move which marks the first nip slip I’ve witnessed in my four years of attending conventions. Unfortunately, if not unsurprisingly, he didn’t make the finals. Sissy Cosplay as Katniss from Mockingjay had an incredible mid-skit costume change- her absence in the Sunday finals caused me to shake my fist at the stage and shout “She were robbed! Robbed, I tells ya!”

I ran back to hit the comic stalls for some last-minute shopping, and overheard a guy telling his young son about the importance of keeping comics in mint because then “at the very least, you’ll always make your money back”. It’s like nobody remembers the Comics Crash of ’96… and like nobody wants to have fun any more. That was the point when I called it a day. 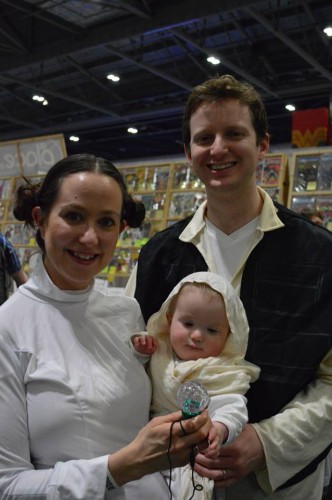 Good to know things worked out for Han and Leia 😀

Rush Hour was on TV back at the hotel. It’s still an awesome movie, in case you were wondering. 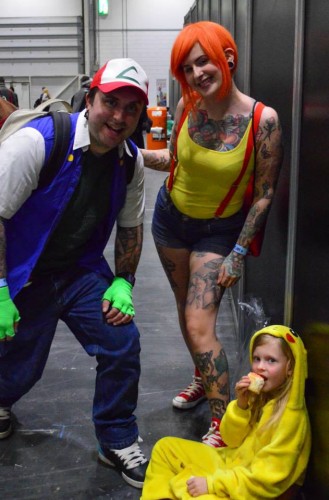 Call me mushy, but family cosplays are the best cosplays…

I came to the conclusion, at some point in the weekend, that conventions are the nerd equivalent of a spa weekend- sure, we spend a lot and it seems like a waste of time and money to people who don’t get it, but we come back from our time away feeling much better about life. It struck me that this would be a good way to explain my obsession to my more “normal” friends. I think that’s why I decided to combine metaphor with reality and get a massage to soothe my aching comic-carrying muscles.

You may have noticed them at conventions, the inviting stools with the smily ladies offering you a neck/back/shoulder rub. To be totally fair to them, they were lovely, and the back portion of the massage was fantastic… but I’m pretty sure every nerve in my neck and shoulders got pinched. There were pins and needles and shooting pains. I cursed my upbringing for not adequately equipping me with the social skills necessary to say “I am in agony, please cut that shit out” to a really friendly masseuse. I think I stood up tenser than I sat down. But then maybe I’m just not the type that’s built for massages. 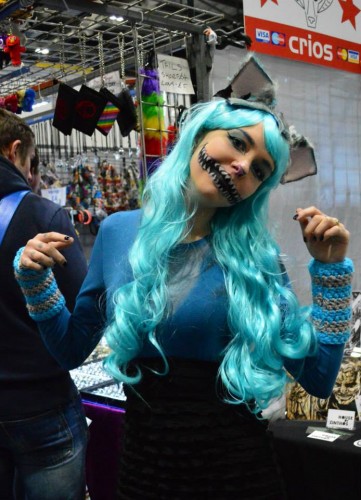 In an increased state of crankiness, I went on the prowl for a T-shirt from one of the many clothing stalls, since my lack of success in the field of “cute T-shirts that fit me” is well documented on this very site. I was disappointed to find that the T-shirts available in ladies’ sizes were significantly fewer in number than the men’s, and much more basic in design- nothing I couldn’t find cheaper in Primark, and some pretty poor My Little Pony tees. I mean seriously, I love My Little Pony so much, but the day I willingly don a T-shirt with a picture of Twilight Sparkle and the inexplicable caption “EMO” is the day I have obviously been replaced by Bizarro Laura. Do better next time, guys. 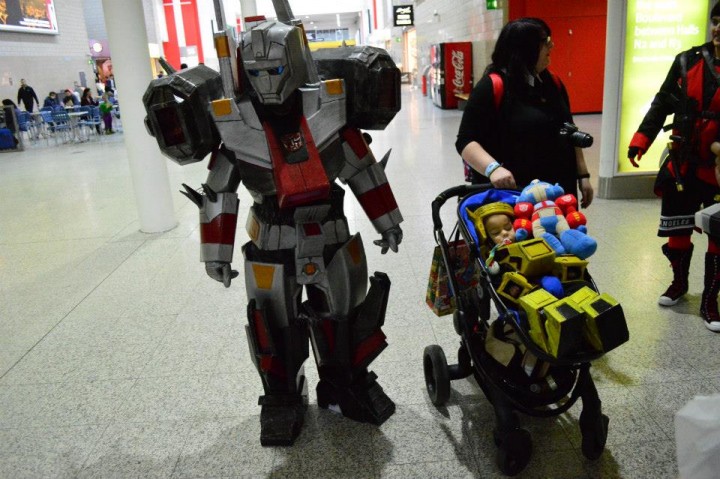 The always-fabulous Super Maians as Transformers…

However, all was not pain, disappointment and suffering. My friend Jessie got a signed Christian Ward print on the Saturday, which sustained a small rip. No big deal, really, but Jessie was pretty devastated. So on Sunday, Christian Ward replaced it with not one, but three prints. And then he tore the slightly-damaged one into pieces with a look of near-manic glee while Jessie cried. It was beautiful. 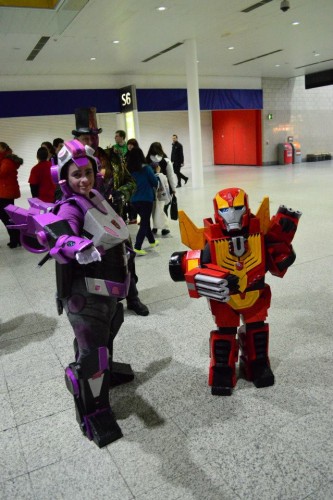 …and here they are again!

The cosplay finals had some solid entrants: Popette was Lady Loki, complete with handouts detailing why French Loki is the best Loki- they had graphs and everything! Jake and Rocket Penguin Cosplay as Joker and (of course) Penguin, graced us with a hilarious “Do You Wanna Kill the Batman?” skit. Valentine Cosplay’s Oberyn Martell lectured us on the benefits of various poisons and the subtle joy of killing a man… I really feel I learned something.

In the end, however, none took home the prize. That honour went to runner-ups Cosplex (with a Poison Ivy fan dance/family-friendly burlesque), Kerry and Kenny Cosplay with their magnificent Live Die Repeat/Cheeky Girls mash up, and the ultimate winner RossECobb’s Broadway Ursula, complete with seductive evil musical number.

So that was that. It was an interesting weekend, even if some of the wide-eyed wonder has tarnished now I’ve been on the scene for so long. But on the train home, having devoured Bendis’ advice on how to write comics, and my own notes from the panel, as well as chatting to some indie comics creators and seeing the bigger names interact with their fans, I was overcome with the need to write. Not articles, but fiction. The thing that drew me headfirst into this world in the first place.

So this will be my last article for Geek Pride. I have loved working here, loved being a part of this community, loved (and still love) all the friends I’ve made. But journalism isn’t for me any more, and fiction is. It always was. Thank you to my Geek Pride colleagues for the support, the laughs and the sexual innuendoes you always tolerated from me; and thanks to you guys for reading my words- however many or few you are, I appreciate that you took the time to read, like, comment, share my work.

I love you all. So long, and thanks for all the fish.

At the time of character creation, Laura Maier made the mistake of putting all her points in charm. While this was probably an unwise decision, it's served her well so far. Her power animal is the platypus.
You might also like
Comic Concomicscosplay