Magic of Myths: Faerie is an interesting prospect. It serves as a sort of side text to the core canon text of Magic of Myths (a review of which can be found here), exploring an aspect of the narrative’s world that has been somewhat alluded to before, but never fully explored. While Magic of Myths focuses on the primary players of the Roman and Greek pantheons, Faerie, unsurprisingly, explores the realm of the fae folk. As with the primary MoM story, it does so with characters that will be very familiar to a fair amount of readers. The presence of Mercury and Hermes serves as our main link back to the original story while the primary players in Faerie are drawn from Shakespeare’s A Midsummer Night’s Dream with Titania and Oberon serving as jealous rulers of the realm and unfaithful partners, their daughter Robin meanwhile is our entrance to the narrative and the figure unfairly cast as Puck in Shakespeare’s story.

The intention of Faerie is clearly that of a stand-alone story. While it’s referencing to the greater mythos of the Magic of Myths universe is often obvious, it does not rely on these references to forge its own narrative. The characters within stand up well on their own, despite the fact that it is no more than a brief glimpse we get at several of them. Titania in particular, conveys volumes with the short scene of speech in which she appears. What works so well for Faerie, perhaps even better than in the regular Magic of Myths storyline, is that it plays upon a certain established cultural knowledge. Even if you haven’t specifically read A Midsummer Night’s Dream or fairy related folklore, there are certain elements of the stories and characters that you know, seemingly without really knowing how or why. When it comes to matters of mythology, there is an extent of permeation that occurs regardless of intention. We are attracted to totemic figures, these near idol characters, and so, to a degree, we understand everything about Robin, Titania and Oberon even before we are shown their individual paths. 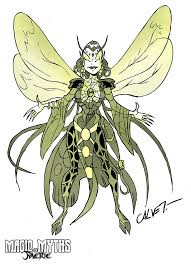 However, and this is somewhat of a small however, there are problems. The writing from Corey Brotherson is on good form, as it was with Magic of Myths, and even plays to some of the darker notes that the core text perhaps shied away from. And Sergio Calvet’s art definitely works better here than it did in the regular MoM series. Though it’s still not my favourite stylistic, the oddness of his figures definitely work well when dealing with the otherworldy nature of the fae. Titania and Oberon particularly, came through with strong looks. Here is my issue though. Aside from the mild frustration of not getting to see the full events of the story played out,the possibilities of follow up are still being debated by the creators given their commitments to the core series but their may well be more one-shots in the future whether Faerie related or not, my main problem is one of tonal commitment. The script is very good, don’t get me wrong. But when you compare the second half of Faerie to the first, the difference is hugely noticeable. And while change is obviously something one expects from a good story, when the change happens over such a short span of time it seems somewhat incongruous. And my real irritation is that I really, really like the darker stuff. When Brotherson decides to go dark, his characters really have to deal with some heavy issues. I just wish that those issues were played out for longer, and teased in more from the start, rather than appearing halfway in. Brotherson handles the spacing of the story well but could perhaps do with committing one way or the other rather than taunting me with possibilities at the close of the narrative.

Overall? It’s a very solid entry into the Magic of Myths series, serving well as an entry point for new fans while also holding a lot of appeal for those already invested. And though I have my issues, there are some very promising signs here. Calvet’s art is never going to be my favourite but in Faerie he’s really found a direction that makes it work to the full advantage of its unique style. And though it is still up in the air whether or not I’ll get the full investment of darkness I would love to see from this universe, the more Brotherson develops his style and his characters, the more excited I get to see where this undoubtedly talented writer ends up. Old fan or new, I would thoroughly recommend checking out this addition to the Magic of Myths series, if for no other reason than it may convince the creative pair to make more of this side narrative.

Magic of Myths: Faerie will be launched at Birmingham Comics Festival next month. You can keep up with all Magic of Myths news, Faerie and otherwise, via the official website.