Geek Pride official and proud sponsor is pleased to announce that Melksham Comic Con is back! The indie convention is run by passionate fan and comic store owner Hayley Spencer, in a small town in the heart of Wiltshire,.

Thanks to the help of numerous supporters Melksham Comic Con 2013 is going to be even bigger and whilst it might not have the sprawling scope of London MCM or San Diego Comic Con it doesn’t have their eye watering cost either. Guests include Kieron Gillen, Si Spurrier, Simon Furman and more besides 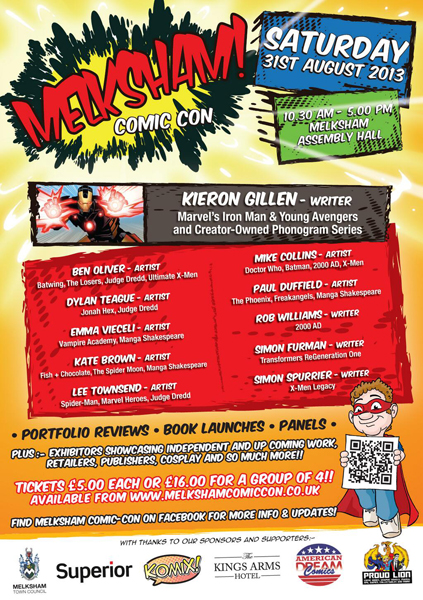 Andy Haigh started writing to counteract the brain atrophying effects of Retail Hell, now it's an addiction. Andy is an unrepentant sequential art absorbist and comics are one of his passions. Other interests include Film, Music, Science Fiction and Horror novels and quality TV like Game of Thrones. He can talk about these at great length if only someone would listen. He lives a somewhat hermit like life in The Shire, spends too much time on social media and is still waiting to go on an adventure.
You might also like
breakingconventionkieron gillen