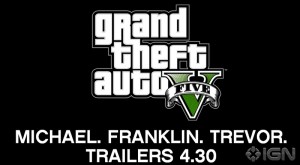 If you’re wondering why the Internet may have temporarily melted for a brief period this afternoon then that’s because Rockstar just dropped three new trailers and character reveals for Grand Theft Auto V.

Set for release on September 17th, the trailers feature the stories of three protagonists. Michael is a wealthy and middle aged ex-con, explaining his boredom with a white collar lifestyle to his shrink. Franklin is a gang banger out to prove himself, obviously inspired by San Andreas’ C.J., and Trevor is some good old trailer park trash just living and humiliating himself one day at a time.

At Geek Pride we couldn’t be more excited about GTA V, after all any game with the potential to overshadow two next-gen console launches is worthy of anybody’s attention, and watching these trailers today has only made me want GTA V more.

You can check out the three trailers below:

Grand Theft Auto V will be released for PS3 and Xbox 360 on 17th September 2013. No next-gen or PC releases have yet been confirmed.

A proud member of the Geek Pride video games editing team, Sai can currently be found trying to get through his Christmas games backlog (and failing miserably at it).
You might also like
breakingcharacterfranklin