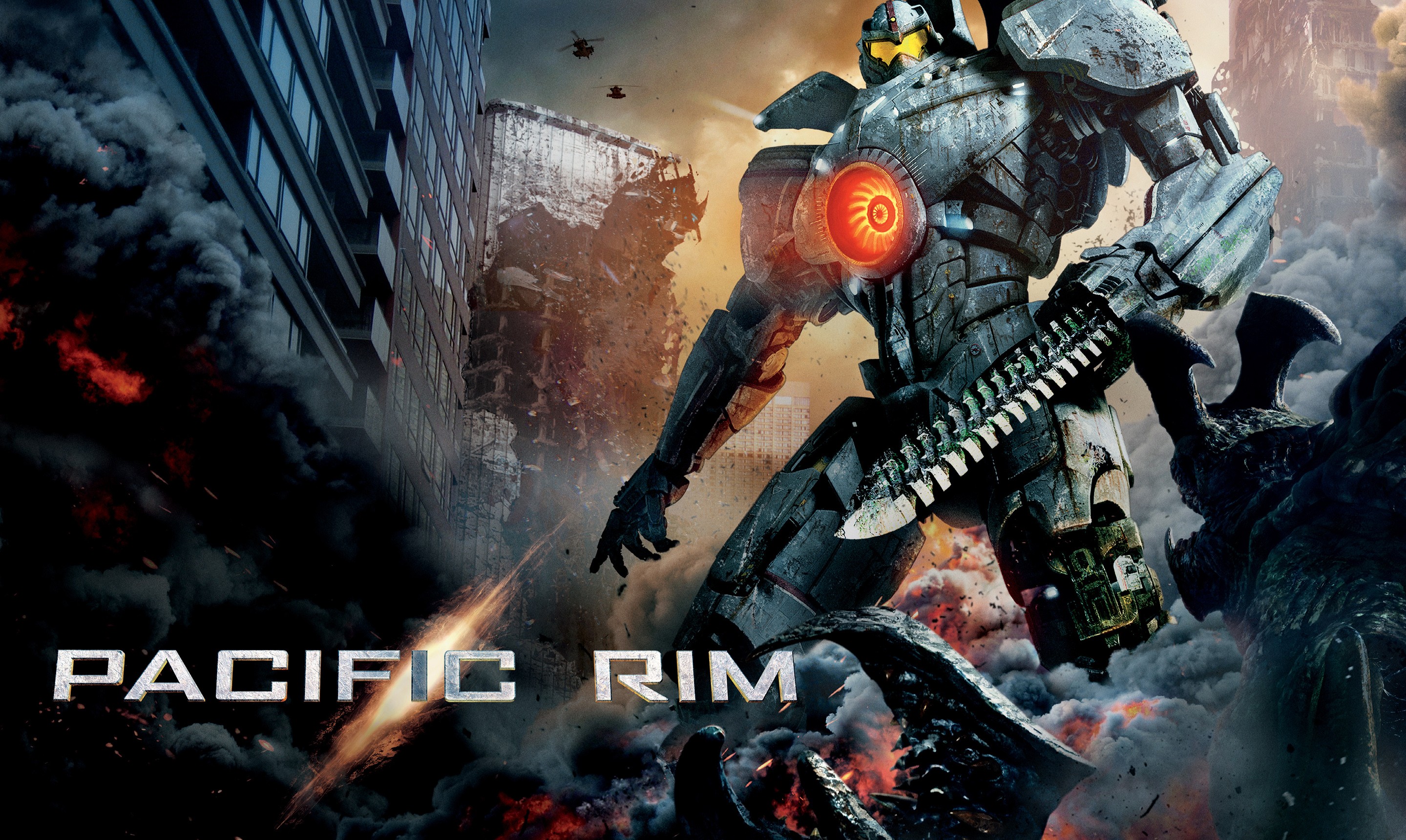 If I asked you to think about movies involving giant robots, what comes to mind? Transformers? Anime like Macross and Gundam? Power Rangers? For me (being the old-ish fart that I am), it was early nineties movies Robot Joxx, Crash and Burn and Arena.

If those nineties films ring a bell, or you’re of the younger generation and are a fan of anything else that I’ve mentioned, then Pacific Rim is something you’re going to go batshit for… at least, initially.

Yet again, this is a movie that is not complicated in the slightest – Giant monsters called Kaiju emerge from an inter-dimensional rift at the bottom of the Pacific Ocean, and proceed to lay waste to the human race. In a bid to defend themselves, humanity kickstart the Jaeger program, and build enormous robots to assist in exterminating the Kaiju. Jaeger pilots gain almost rockstar status as a result of their exploits, however the Kaiju ramp up their assaults and start sending much larger and meaner monsters which decimate the Jaegers with speed and precision.

The film predominantly follows the pilots of the American Jaeger codenamed “Gypsy Danger”, in particular Raleigh Becket (Charlie Hunnam – Sons of Anarchy). Teamed with his brother Yancy (Diego Klattenhoff), the two pilots’ minds are merged in a process called “Drifting”, where they see and experience each other’s feelings, memories and more. The process is necessary as controlling a Jaeger is too much of a strain for one person, so the drifting is involved to share the neural load (a process that funnily enough isn’t as ridiculous as it sounds).

I’m not really able to go into much more story detail than that without unleashing spoilers, so I’ll stop there – however although Pacific Rim may be light on complexity, it certainly makes up for it in terms of charisma and eye candy. Just to clarify the movie isn’t exactly dumb, but as it develops the twists and turns can be seen coming a mile off.

Charlie Hunnam’s performance is actually really good, and he’s basically unrecognisable as the kid I saw on UK TV a few years ago. Sons of Anarchy has moulded him to perfection for this role, and his gravelly vocals are used to good effect for the narration of the movie as well. You’d think that as the film mostly centers around the Jaegers and Kaiju, the actors get left by the wayside a little – this isn’t the case. There’s plenty of action outside the metal behemoths – some great fight scenes between Raleigh and Mako (Rinko Kikuchi) and rival pilot Chuck Hansen (Robert Kazinsky) show off Hunnam’s physicality and some great choreography.

Ron Perlman makes a brief appearance too as the Kaiju organ farmer Hannibal Chau, wearing some pretty spanky shoes too I might add. Perlman’s character is prettymuch the same as every other character he’s played though – the deep-voiced, violent and angry badass… anyone would think he’s been a little typecast… and they’d be right.

The action between the robots and monsters is fast and frantic (try not to sit too close to the screen at the cinema, especially if you suffer from motion sickness at all), taking place on land, underwater, in the air… no stone building is left unturned destroyed while they are beating seven shades of shit out of each other. Whereas in the Transformers movies the robots fighting each other seems a little too fake, what Pacific Rim achieves brilliantly is that the impacts actually carry weight and feel that much more real as a result.

This is where I can’t applaud the visual effects department enough – the Jaegers and Kaiju are incredibly convincing, and when any of the fights are taking place you feel like a kid watching your first superhero movie all over again. It’s edge of your seat stuff, and so fantastical that you can’t help but ignore the film’s faults and keep saying how awesome the spectacle is over and over. The pilot’s movement and controls all seem to work really well with their respective robot’s movements too, and seem convincing (especially compared to the giant robot movies of old like Robot Joxx) with both regular movement as well as battle maneuvers.

The design team behind the Jaegers and Kaiju have to be commended too, as there’s some really innovative and spectacular monster creations – some that spit acid, and even some that can emit an electromagnetic pulse. To get a bit more of an idea behind the Jaegers and their design and weaponry, you should check out the Jaeger Designer on the official Pacific Rim webpage – in building your own monstrous robot you can learn about the different design facets.

The soundtrack to the film is suitably rousing and inspiring, along with including those deep pounding basslines to add to the dramatic effect during tense battles. I couldn’t fault this at all, and nothing felt out of place.

In terms of what I didn’t like about the film, this boils down to the story. It’s a little weak, and as I’ve said before there’s several plot developments that you can see coming.

I think the reason for this is that del Toro was intent on making a family blockbuster, and as a result he’s catered a little bit too much to the younger audience – with this in mind I can understand the relatively simple story, but I can’t help but think that if the movie had been given a 15+ rating (an R rating in the US) that it could’ve become something truly epic.

As it stands, Pacific Rim is a good movie, but not great. It ticks all the boxes in terms of the effects-driven summer blockbuster, and it’s hugely entertaining… but a thought-provoking film it is not. The film definitely needs to be seen on the big screen though – if you wait until DVD/Blu Ray before you see it, you’ll lose the impact of the immense spectacle and scale of the movie… much like my experience with Reel Steel (not that Reel Steel was a good movie, but I know I would’ve enjoyed it more on the big screen).

Worth your time and money? Absolutely. But Guillermo del Toro can definitely do better – lets hope for a sequel… and if the extra scene after the credits is anything to go by, it’s possible.

MonstersThe Free Dictionary: an abnormal dread of deformity, usually in others. →