previous
Art Noveau Style Superheroines by Hanie Mohd
random
next
Whedon's S.H.I.E.L.D Will be a Sequel!

I must admit this is something special. Not since the Doctor Who Christmas special have I been this excited, and that is saying something!

Everyone who is anyone loves a good Pokemon game, and I would like to share with the world the exciting news that the franchise is releasing two new games called “Pokemon X” and “Pokemon Y”; but wait, there’s more! The games are being released on the Nintendo 3DS and will be fully 3D. The first Pokemon games to bring the action into the third and most awesome gaming dimension! 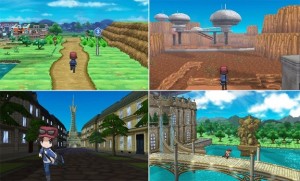 If you wish to watch a very exciting video on this the link is http://www.youtube.com/watch?v=VzO6J981nAw. I must say, the video is pretty awesome; it is like having the coolest lecturer in the world teaching you on the coolest subject on the planet!

We watch as we go through the history of all the games right up until he introduces for the first time the new games being released this year. The video footage is nothing less than exhilarating and my breath left my body as the three new starters were introduced in thrilling 3D battles. These starters are: Chespin (grass), Froakie (water) and Fennekin (fire).

I must admit I am already in love with Fennekin. Adorable isn’t the word. The only downside? We must wait until October this year, but my God, what an exciting month that will be! The games, unlike some before it, will be released across the globe at the same time. Guess I will need to get myself a 3DS then eh? Never had a reason to before but now… I definitely do.

If you wish to find out more visit www.pokemon.com. So remember Pokemon fans; October is the month, X and Y are the names, and 3D is the format of the game!

Here is me in the form of a haiku: My name is Jodie, Love fun, love hugs, loving life, To write is to be.
You might also like
breakingchespinfennekin