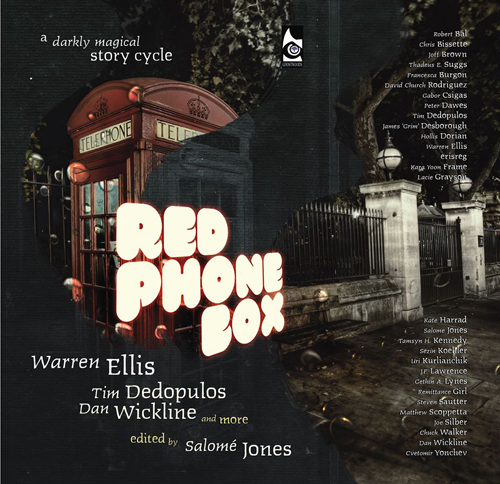 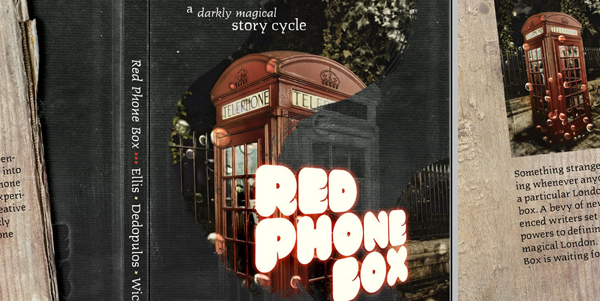 The Kickstarter funded Red Phone Box from Ghostwoods Books tells the interconnected tales of numerous characters. The one thing they have in common is a red phone box in the heart of London.

A collaborative effort from over twenty contributors including acclaimed writer Warren Ellis, the project was overseen by writer Tim Dedopulos and editor Salomé Jones.

With Red Phone Box being published recently (it’s available anywhere books are sold, try your local book store they’ll appreciate it) Salomé shared some insights about the creative process and managing a project with so many contributors.

Where did you come up with the idea for the book, was it always intended to be an anthology?

I moved to London three years ago. The neighbourhood I moved into is home to a lot of red telephone boxes. On a walk one day I saw my first one up close, and I was

immediately drawn to it. Got inside. Had someone take a photo. There’s just something about them. It was still stuck in my head when I wrote the first story, ‘What  a Little Moonlight Can Do’, which is now chapter two of the book.

I was looking for a collaborative project when I wrote that first story. What I really wanted to make happen was that other writers would chain off my story and make something novel-like. Have you ever played Exquisite Corpse, that writing game where each person writes two sentences and passes it to the next person who can only read the two sentences that came right before his or hers ? I saw it as like that, except with whole stories. A novel made out of stories, which is actually a literary form, but usually it’s written by one person. I wanted it to be written by many. It seemed like a fun challenge at the time.

How did you go about getting so many different contributors for Red Phone Box?

The first dozen or so writers found me. A couple I knew in real life, but most of them were just readers of my blog or Twitter. Something about the phone box or the first story, or maybe the concept behind the project must have struck a chord with people. But then, I went out and asked people to join in. It didn’t hurt that Warren Ellis blogged about the series. This was a couple of years ago when his blog was a daily thing. I’m not sure where they all came from. Out of the woodwork. I feel very lucky to have found them. They’re an amazing bunch of people. Some of them have become quite good friends, even though we’re miles apart in the physical world.

Kickstarter and crowdfunding has been behind some great things recently but many a great project has failed too, were you surprised by the amount of support you received?

I am, as a rule, terrified of failure. We prepared for the Kickstarter for about a year before launch. I really had to believe that we wouldn’t fail in order to do it. But yes, I was stunned about the amount of support we received. There’s another great group of people, the backers.  People can be so supportive when it comes to creative projects, but you have to put the right project in front of them at the right time, I think. And there were also the people who helped make it a success. Warren Ellis and Ben Templesmith. Lovely gentlemen.

Having over 20 different contributors working on the project must have taken some organisation, did you have any problems along the way?

We had surprisingly few problems. Mostly because we worked so hard on it. The stories that I hoped would sync up all by themselves had to be herded like cats in order to make a collective novel out of them. But it was worth it, I think. It’s not a perfect book, but it is rather amazing. The fact that 28 people wrote whatever they wanted, pretty much, is the reason why there are so many characters and interwoven plot lines. I actually think that’s one of the best things about it. There were a few issues with copyright clearance. Some things we tried to get permission to use and failed, so in the end, I drew a very clean line and took out anything that even remotely seemed to hint at another copyrighted piece of work. I think in doing so I managed to annoy some of the writers, but it’s much better to be safe than to be sued, is my feeling.

Generally, though, I have felt them all with me all the way. We had each other’s backs and I look forward to working with the team again.

Now that Red Phone Box is on the shelf for people to buy, what’s next for Ghostwoods Books?

We have a few other projects in the works. Up next is an anthology of Lovecraftian stories with the working title ‘Cthulhu Lives!’. We’ve had some pretty good stuff submitted for it, including something by John Reppion.

We’re looking for some new, unique projects. It’s difficult to come up with something like ‘Red Phone Box.’ It’s not the kind of book you manage to put together every day. We are planning on a sequel, though, in which the catastrophe that led to the dire future will be solved. Or, if Gethin Lynes has his way, everybody will die.