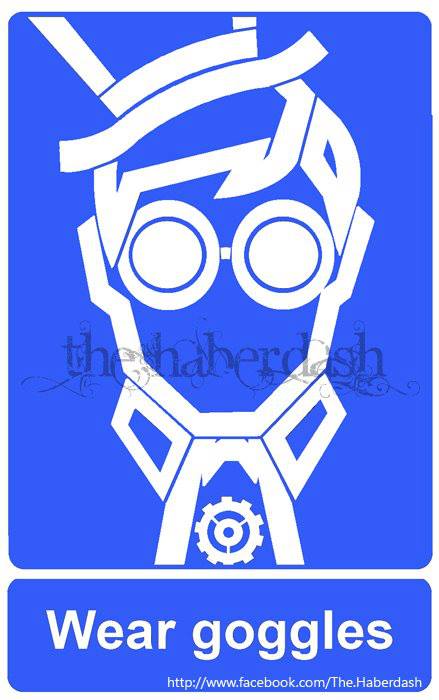 So I had a chat with Avon Taylor, the gentleman and inventor behind The Haberdash Steampunk Shop, and here is what he had to say…

The Haberdash grew, and continues to do so, in stages. Originally started as a hobby with spare parts from clockwork repair, as a way to pass time between volunteer shifts after losing my job. From there it moved into jewellery, then customisation of items and eventually prop production, rentals and events. When I started, I was met with a lot of enthusiasm for a steampunk specific event- many friends and people were already interested in the culture (even if they’d never given it a name), and word spread.

We’ve always sought to promote a community as well as a business, and seek not only to keep our own prices as low as we can, but also to promote work of other people in the field. Our original philosophy had two points: we might not be the top end today, but we won’t be the bottom end of the market either; and if we can’t do something justice we will always recommend to the customer someone who can. We’ve been fortunate to have a lot of support from people in the steampunk community, whom we’ve been lucky to work alongside, such as Professor Elemental and Metropolis.

There’s been a lot of changes over the years, trying to ensure a growing customer base and event attendance, but our heart will always be in steampunk- with a twist of horror.

Carnivale: Bedlam marks our second major Halloween event, following the success of Project: Bedlam last year. Taking the steampunk concept of mad science, we considered the idea of an asylum filled with dangerous but gifted minds looking to showcase their ideas. Of course, given the time of year it all goes wrong, and at some point before the symposium itself a mysterious character calling himself The Warden overthrows the real powers that be, and releases all the nastiest and most disturbed evil types. 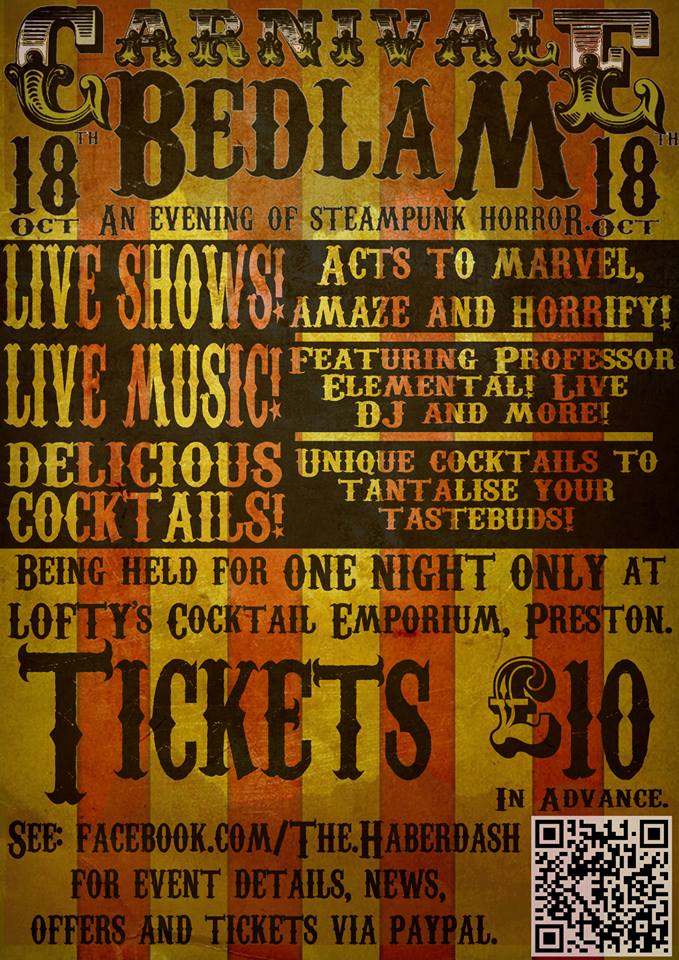 This year we see their return, alongside some new faces, following their escape and having created their own carnival as a chance to wander the country, finding like minds and victims for their terrible experiments. We’ve been most happily contracted by a local venue –Lofty’s Cocktail Emporium– to create their Halloween show alongside our own. This allowed us to return to Bedlam’s roots on November 1st, with the carnies putting down their balloons and juggling balls and once again picking up their scalpels and saws to bring a classic style of horror to Preston.

To our knowledge, we’re the only dedicated interactive nightclub experience of this sort- live actors alongside props and decoration for entertainment purposes. The concept appears well-received and we aim to continue building on it, not just in horror or steampunk but in cyberpunk, dieselpunk and similar avenues. Though our main focus is now events (and Halloween), we’re still happy to take queries, talk steampunk and, if folks are interested, take commission work on props. Again, if we don’t feel we can deliver a high enough standard at the right price, we’ll gladly recommend one of our colleagues in the field.

As for the business owner, myself, there’s not a lot I can really say. I found when I used to have a steampunk shop with a friend, that a lot of customers would say “I wish I could wear this or that, but I’m scared of people being rude or violent”. From this, I created the Wear Goggles promotion- if everyone who says such a thing started wearing what they wanted it would no longer stand out to people looking to be negative about it. Even if it’s as small a thing as wearing goggles, or a cool hat- it’s a start. Having just returned from Asylum with the wonderful V.S.S., the only thing I saw of people not in steampunk was them complimenting and asking to take a photo.

The events and productions may be my business, so I want in that sense to appear in many places, but most importantly I want this alternative culture to spread. I want a world where spats, hats and cravats are as equal an option when popping to the shops as jeans and t-shirts. If my shows allow this to become more prevalent, then I’m truly doing what I consider my job.

I am Lady Noctis *waves* a small vertically challenged lady with a big heart, a penchant for comic books, and a small obsession with a character known as Harley Quinn I'm a part-time model, freelance illustrator, full-time geek and cosplayer. "I'm just another dreamer running around in a cape playing superheroes… ok, truth. I'm an aspiring illustrator who also likes to play dress up."
You might also like
cyberpunkeventshorror