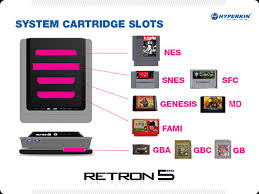 Thinking of buying a retro console, but not sure which one to get? Well, Hyperkin’s RetroN 5 console is coming to the UK soon, able to play nine different 8-bit and 16-bit formats: 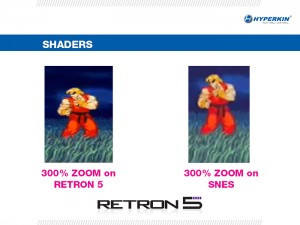 NES, SNES, Famicom, Super Famicom, Megadrive, Genesis, Gameboy, Gameboy Color and Gameboy Advance. It doesn’t just emulate them like some consoles out there- it has five slots to take the original cartridges of all of these formats. You may notice that some of the machines I listed are just regional variations of the same machine (the Genesis is the US name for the Megadrive and the Famicom is the Japanese name of the NES, for instance) but this means that there is no region locking; it will play both PAL and NTSC games.

The other advantage of buying this over an original console is that you don’t need to mod it or use a CRT TV in order to play it. With both HDMI and composite AV ports, you’ll have no trouble using this on a HD TV. The system also has shaders, which will help enhance images up to 720p and you will be able to switch the aspect ratio between 4:3 and 16:9.

It will come with a wireless controller, which uses Bluetooth technology and has modern gamepad features like a home button and LED indicators to display the player number. However, if you prefer to, 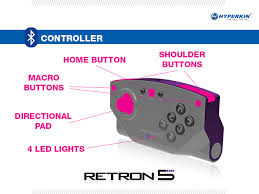 you can use an original controller instead.

Other features include a save function, which can be done at any point in a game, and the console will auto-save when powered down. There is also a function which allows you to speed up or slow down your games to fit your preference.

The RetroN 5 is due to be released on 10th December 2013 and has an RRP of £90/$100/€90, which I think is very good considering its capabilities and that some of the original consoles would could cost £50 alone. This is on my Christmas wish list for sure.

I'm a 35 year old, self-confessed media junkie from London. I currently work as a tester in digital media (some say I get paid to watch telly) and also worked as a games tester in the past. I also spend a lot of my spare time watching films and playing video games. Thankfully I have a very understanding wife, who allows me time to do so.
You might also like
breakingFamicomGameboy