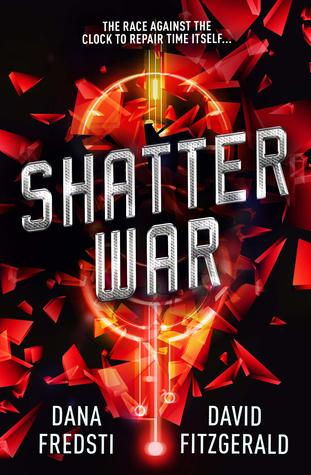 This is the second novel in the time ongoing Time Shards series by Dana Fredsti and David Fitzgerald, which opened with the excellent Time Shards (reviewed here).  We continue to follow the exploits of Amber and her friends as they seek to discover the cause of the ‘Shattering’, where time became fragmented, and whether there is some way it can be stopped.

Amber and Cam remain as the main characters, but Shatter War dedicates more time to some of the supporting characters like Nellie and Winston.  Whilst Winston comes across as somewhat two-dimensional, Nellie feels much more rounded, as Time Shards offers more insight into her character.

Rather than just being more of the same, Fredsti and Fitzgerald build upon the existing premise and increase the ante by introducing new science-fiction elements to the mix.  Parallel lives may seem like pure fantasy, but it is interesting to consider the science of infinitely branching time-lines for every decision that is made.

Never fear though; dinosaurs continue to remain an excellent threat, not just for the principal characters, but for the setting as whole.  However, rather than being the typical dinosaurs we all know from TV and film, Fredsti and Fitzgerald delve into history to unearth some truly monstrous dinosaurs, whose epic descriptions give the reader pause for thought.  They become the modern sea monster, in that they are an implacable force of nature that cannot be reasoned with or stopped.

There is even an army of Nazis – Germany’s Afrika Corps from World War 2 – to deal with, so what isn’t love?  It could only have even been better if the dinosaurs attacked the Nazis!

Time Shards ended on a high note for Amber and her friends.  A situation that could have overwhelmed the story if they the situation was not handled properly.  Fredsti and Fitzgerald are able to deftly negate the domineering elements of the situation without resorting to deus ex machina.

There are lots of neat little segments throughout this novel that offer deeper insight to the world of Time Shards.  There is a fantastic moment where, due to the nature of the shattering, the characters encounter multiple versions of the same person at the same time without causing a paradox.

Nellie is a fantastic supporting character, for what she lacks in modern education, her grit and determination more than compensate for it.  Likewise, whereas previously Winston’s blustering was unsympathetically portrayed, we now learn far more about his character and he comes across in a more positive light.

There is also an interesting discussion about the nature of language and how it has evolved.  People from the same geographical region, but from different time periods, still struggle to communicate with each other, as language has changed over time.

Overall, Shatter War explores and expands the premise of Time Shards to create a far more epic tale of time-travel and parallel, but still focusing on the human elements of the story.  It is a rollercoaster of a ride that escalates to a satisfying conclusion, whilst setting the foundations for the forthcoming sequel Tempus Fury.