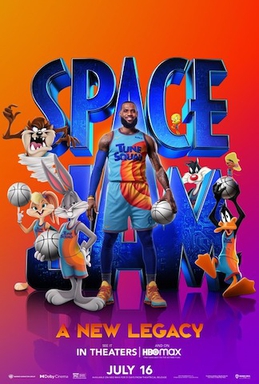 Space Jam: A New Legacy is the sequel to the classic nineties film Space Jam.  There have been a multitude of platitudes lauded upon this film.  “Abomination” (The Daily Beast) is one.  “Soulless” (The Guardian) is another.

This time LeBron James is filling the shoes of the inestimable Michael Jordan, where he takes on an evil algorithm.  This feels somewhat hypocritical, given how this film has been seemingly written by an algorithm built on incorporating all of the lowest common denominators.

Tapping into the nostalgia money tree is the name of the game here.  Rather being than sucked into cartoon world, James is sucked into the internet.  Sorry, the ‘serververse’, as it is called here.  If this sounds familiar, then you are not wrong.  Ralph Breaks the Internet, for example.  Hell, Tron is all about people entering the internet – and that was nearly thirty years ago.

We naturally have an estranged son that James needs to reconcile with (too many films to mention) and rely on his son’s coding skills to save the day.  I am struggling to find anything even vaguely original in this film.

Also, let us not forget the number of times we are bombarded with the Warner Brothers logo.  Yes, they have a fantastic catalogue of films, but when a film is just showcasing a studio’s back catalogue, it might be time to for a rewrite.

There is a scene where James is pitched the idea of being digitised and having an algorithm create content about him.  It was certainly audacious incorporating the meeting when this film was first pitched to James.

It is the actors that I feel most sorry for, having to portray this drivel.  How they got Don Cheadle (you know, the guy who is busy playing James Rhodes/Warmachine in the MCU) involved, we will never know.