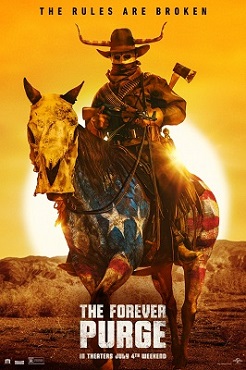 The Forever Purge is the fifth film in the Purge series, one of the few franchises that could be described as political horror.  The core premise is that a seemingly utopian near-future America has one night every year where all crime, including murder, is legal.  Despite all the violence and elaborate traps, the true horror of The Purge is the setting itself.

Each film, as well as the television series, has continually expanded the scale and scope of the setting.  The first film is set in a house, whilst the second film (The Purge: Anarchy) shows the purge on a city-wide scale.  The third and fourth films, The Purge: Election Year and The First Purge respectively, explore the politics behind the purge and the New Founding Fathers of America (NFFA) – the political party who created it.  Meanwhile, The Purge TV series, explores the impact of the purge on the setting’s society, including the legal and cultural ramifications of the event itself.

The Forever Purge, the fifth and latest film in the series, takes place following the events of The Purge: Election Year.  The NFFA have returned, and so has the purge, but this time the Purge Forever After group of white supremacists want to continue the purge and rid the country of so-called ‘non-Americans’.

The Purge films have always tapped into the current fears and The Forever Purge is no different, highlight growing tensions around immigration.  In The Forever Purge there is now a concrete wall along the Mexican border, but rather than keeping people out, it becomes a wall trapping people inside America.

Ensnared within the chaos are the Mexican couple Adela (Ana de la Reguera) and Juan (Tenoch Huerta), who band together with the Tucker family; ranch owners whom Juan works for.  They are forced to set aside their cultural differences to traverse this new America to the Mexican border, before the time runs out and the border is closed forever.

All of the roles are excellently acted, but there are no big names to draw in their fans.  Of course, this does mean that any of the characters could die any second.  There is no star power immunity protecting the characters here.

The cinematography is likewise excellent, with a directing style that is heavily focused on the close-up views of the characters.  This embeds the viewer in the world of The Forever Purge, creating a far more visceral and suspenseful experience.  The only downside is that are several action scenes in the dark, which occasionally obfuscated what was happening on screen.

The Purge films have always applied a carnivalesque aesthetic to their horror, with the purge treated as if it were a national holiday.  However, The Forever Purge has a distinctly post-apocalyptic grind core feel with powerful visions of cities degenerating into chaos as the purge continues.

There is a plethora of American iconography used throughout the film, with cowboys and trucks, contrasting the immigration themes and what it means to be American.  The Forever Purge also highlights the rampant gun culture, with a fantastic monologue extolling how guns are the sound of America.

“Listen to that rhythm…  Homegrown music from the American heartland right there.  That’s American music right there.”

The Purge films have always been inherently political, if lacking in subtlety, and The Forever Purge is no different.  Those hoping for a nuanced examination of the cultural politics in America will be disappointed.  The Forever Purge is brash and bold.  This is a film that raises questions but leaves the viewer to find their own answers.