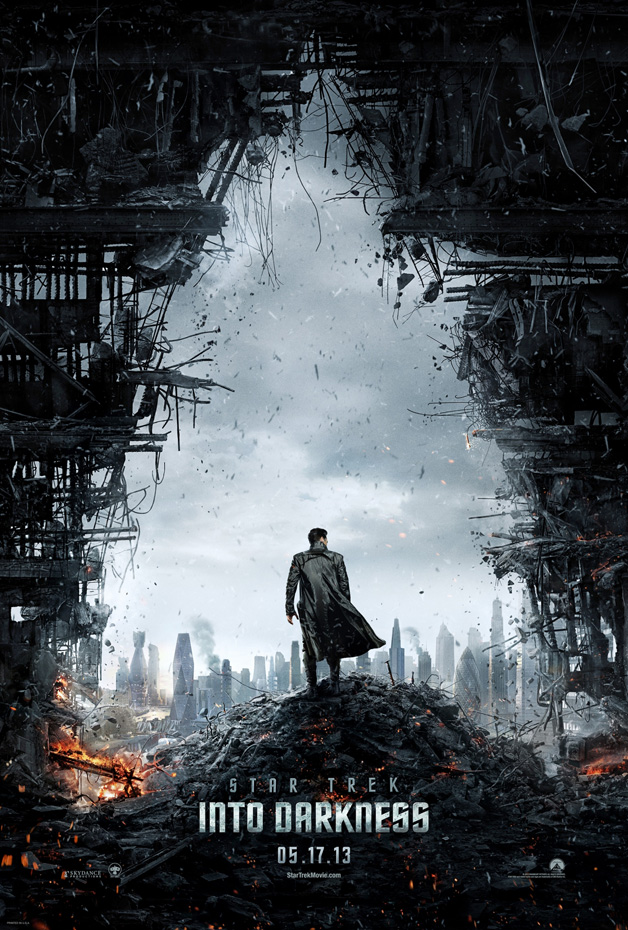 Back in December I brought you the official synopsis and movie poster for the very secretive sequel Star Trek Into Darkness , since then we have had a trailer, a motion movie poster and a little more information about the project, so I thought it only fitting that I should update my fellow Trekkies.

Let us begin with the trailer:

Wow an action packed, destruction heavy, explosions a plenty, look into what we can expect, with lots of running and jumping. The trailer pretty much confirms what we already knew, Cumberbatch is to be our villain John Harrison. Interestingly the trailer is giving a couple of nods to  Wrath of Khan, namely the Vulcan hand on glass, a reference to Spock’s death in Wrath and the screaming blond woman has been confirmed as Dr. Carol Marcus, Kirk’s love interest and mother of his son, another player in the original Wrath. So it is not a massive leap to speculate that Harrison will become Khan. However, J.J. ain’t going to confirm this anytime soon, it is of course his nature to to be secretive and I’m not absolutely sure that we will find out in this film, this may just be forwarding planning on Abrams part. Either way we can wait but see.

Let’s go back to Dr Carol Marcus, the trailer doesn’t really allude to a romance with Kirk, this could simply because they wanted to make it as action packed and attractive as possible or may be because, as I said earlier, Abrams is setting up for a future return of Khan film. Abrams did have this to say when speaking to MTV:

[box_light] “(Kirk) meets her fairly early on and again she plays a science officer, she’s someone who is a part of the adventure…because it’s very much an action adventure movie and once that gets going it’s a very difficult thing to park the story. So it’s very difficult to do a romantic interlude. Her role is important, she wouldn’t be in the movie otherwise.”[/box_light]

However, I do hope that the makers are not going to completely ignore the fact that she bore him a son. It would be a shame for them to leave out this character development in light of more explosions and a swerve too far from the original may put the hardcore fans off.

In the MTV interview Abrams also confirms that the the Klingons will be making an appearance, he teases “Their role in this is definitely that of adversary, and you’ll see how that plays out.”  I hope it will be full on Cornish pasty headed Klingons.

This film will also see Kirk step up and become not just the captain but the trusted leader of his crew, whilst this is purely guess work on my part I suspect that Kirk’s mother dies in the destruction on Earth resulting in Kirk to have no choice but to accept his crew as his family. Pine has said:

[box_light]“Kirk is fun because he is a brash, cocky, bull-headed kind of guy. I think the journey he goes on in this new film is a lot about – the first one was about getting the chair and the second one is about earning it. And I think that’s a big part of his journey.”[/box_light]

The Super Bowl spot and featurette below don’t really offer much more information but does suggest that this film is far bigger and more of an epic than the first, the word I took away from this was “relentless”. On a side note is it weird that I love to see a Star Ship crashing on a planet?

Starring Chris Pine, Zachary Quinto, Zoe Saldana, Karl Urban, John Cho, Bruce Greenwood, Simon Pegg, Anton Yelchin, Benedict Cumberbatch, Alice Eve and Peter Weller, and directed by J.J. Abrams it hits our theaters on May 15. Until then for your viewing pleasure the motion movie poster with the sultry tones of our villain: