A clever blend of mechanics and a quick game to learn, marred by poorly rewarded player interaction and some odd artistic choices.

Designed by Amanda Milne and Julia Schiller, the game of Manifest sees players traversing the trade routes of the world in the 1920’s. Players use their fleet of two ships to move goods and passengers from port to port, scoring points based on the difficulty of the route. So how is this done? Read on, Dappers and Flappers!

So the chief mechanic of the game is the Action cards. Manifest actually has two versions of the Action cards, effectively giving you two different games. The ‘standard’ version uses a communal deck from which each player draws 4 cards each turn. In the ‘expert’ version, players have their own deck of 6 cards from which they draw 3 each turn, recycling the discard pile as they exhaust the small deck. In the expert version, players also have the option to buy more Action cards to add to their deck (more on this later), and works in the same way as a deck building game such as Ascension or DC Deckbuilder. 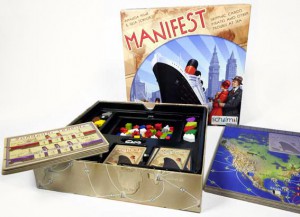 Plenty to see in the well designed box

This is all dandy, but what are Action cards for? Well, each card has three stats: Money, Movement and a Special Ability. Each card can be played for one of these stats only, so a card used to move can’t also be used to earn money. A hand of 3 cards could therefore potentially have 27 different ways it could be played out. This may seem like an almost paralysing number of options, but fortunately it becomes pretty clear early on which options are best for you.

A note here on the standard game versus the expert game: because the standard game is a hand of random cards, I often found turns where the cards were actually useless. You can discard cards or save them for later turns, but I really dislike losing a turn whilst waiting for something better. In the expert game, you have far more control over your hand, and I found no turn was wasted. If you’re even semi-proficient with board games, I recommend skipping the standard game and going straight to the expert version.

Money is used to buy goods at ports, Contracts and in the expert version of the game to also buy more Action cards and upgrade your Starter decks. Any goods you buy are stored on your ship, which has space for 4 pieces of cargo. Contracts show what goods/passengers are needed where, and cost more depending on how difficult the route is (on the flip side, harder routes earn more victory points). Bought Action cards help improve your deck in the expert game, as well as the Upgrade cards which replace the Starter cards, meaning you’ll be able to do more in later turns.

Movement is used to move your ships along the routes on the board; cards can be combined to travel more or longer routes, but any excess movement points are lost; unlike money, movement can’t be split between ships or used for more than one purpose.

Special abilities are used for a range of effects, from setting pirates on other players, gaining new contacts more cheaply, to using a tail wind to really get your fleet moving.

The Special abilities add the majority of the player interaction to the game. Unfortunately, these interactions tend to be attempts to screw over other players which then makes the screwer a target of the screwee and indeed all the other players at the table. Also, the interaction cards don’t necessarily confer a benefit; the Pirate Attack card for example can gain the attacker resources from another player’s ship, but only if the resources are useful to attacker AND if the pirate dice roll the right result. At one point I was concerned I was playing too nice and not fully experiencing the game, so during a game I deliberately started using the attack cards. This rapidly devolved into either being countered by an opponent’s defensive Action card, or not having any detrimental effect to my opponent as the pirates missed the cargo hold that actually had anything in it. Overall, it tended to be more consistently beneficial to not attack the other players, which was a shame as it turned the game into a kind of solitaire affair, with players racing to complete their contracts first without needing any communication with the other players.

The component quality is excellent. The card stock is robust, the board feels solid and hard wearing, and the use of wooden resource tokens and ship meeples lends that little touch of tactility that speaks of designing with the player experience in mind. The rule book is well set out and straightforward, meaning learning the game took less than twenty minutes. The majority of the artwork is also spot on, helping to bring the 1920’s theme to life.

However, the use of black and white photographs of the Kickstarter backers creates a jarring incongruity with the illustrations, detracting from the polish of the artwork; it’s a minor gripe but I can’t help but think it could have been better done.

One final comment on the board design is that I found it a bit busy and cramped. During a five player game, we often had to shuffle boats around to check the names of ports . I’m not sure how this could be resolved, as removing ports would probably detract from the gameplay, plus lose some of the historical accuracy the designers have lovingly applied to the design.

In summary, Manifest is a decent game with a clever mix of mechanics. However, the design is marred by the poorly rewarded player interaction which turns the game into a race to finish Contracts in a solitaire fashion. The game also definitely has a sweet spot at the the 3 and 4 player mark, as a 5 player game left far too much player down time.

An avid board and card gamer, this displaced Cornishman has spent way too much time playing games and skulking around his local hobby shops. He later escaped to Swindon, the land of roundabouts, where he currently designs games whilst infecting those who stand still too long with his gaming lurgy.
More Goodness
ascensionboard gameCard Game