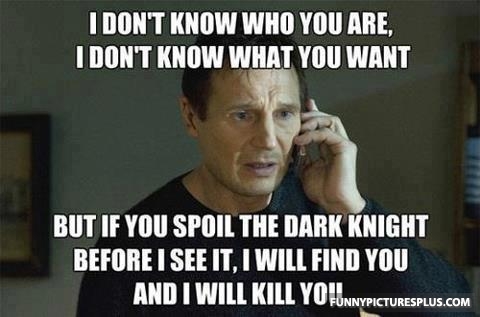 So It’s been over a week since TDKR came out and after giving it a glowing review for Geek Pride I was under the impression that most people would have the same view… WRONG!

The following review was written by a guy called  godspeed_f24 on IMDB and was consequently deleted; along with all posts… I get the impression people didn’t agree with him. Anyway, it’s a long read with a lot of depth, showing the guy has most definitely watched the film at least a couple of times, it is also quite funny in the most part and, as hard as it is for me to admit, annoyingly accurate; doesn’t make me want to change my mind about the film though because I don’t care about plot holes that much.. If I like a film I like it, as simple as that (plot holes and all)

Personally I can understand people getting annoyed with plot holes in historical films, where things should be accurate, or because it’s not following the book it is based on, but picking at a fictional comic book film based on “plot holes”  is like picking holes in StarWars by saying “hyperspace? Not possible; the force? where did he get that from… oh he can move shit with his mind can he?” It just doesn’t make sense. I appreciate the new films are trying to be more ‘realistic’ but comon, it’s still an action film and designed for one purpose only; to entertain the masses….. shall we start talking about how unrealistic it is when large explosions go off and no one is killed by the resultant shock-wave? Or how the A-team always seem to have a blow torch to hand?

People think too much into films sometimes but I guess it is in a geeks nature to pick holes… shame its not one of our more redeeming traits.

Review is below: Part of me thinks this is just a very elaborate troll to be honest but I’ll leave it to you to decide.

Have you seen TDKR yet? Jesus, it sucked. It sucked so bad, that I need to talk about this movie because I think this was perhaps one of the stupidest films I have ever seen. I see people confused about the plot and some details so I’m going to take you through it bit by bit, logic holes and all. It’s not all bad. There’s some good stuff in here but it’s basically a crapsandwich. So here we go…

First, we open up the movie with the plane hijacking which is our introduction to Bane. They pull off a Bond-centric stunt and kidnap nuclear bomb guy and it was pretty cool even if Bane sounded like my grandfather on a respirator. So far so good.

Then we’re at the Wayne residence. And it’s time for what Nolan does best. Exposition baby!! That train is never late. Let’s get started. It’s Harvey Dent Day!! Celebration of the Dent Act which is keeping Gotham’s worst criminals behind bars with no parole. Gordon is bumbling and stumbling trying to come up with some kind words for Gotham’s deceased psycho DA. We learn through convenient conversation from unnecessary new character #1 (Foley) that Gordon’s wife took the kids and left him and he won’t be commissioner too much longer because they’re planning to dump him. Foley is obviously an ambitious little weasel and he’s like Gordon is about to get canned? Ch-ching!! Why the audience needs to know this I have no idea because nothing ever comes of this info. Miranda Tate (unnecessary new character #2) is still trying to see Bruce Wayne for some big project. Alfred tells her to step off.

We also find out Bruce Wayne is a Uncle Fester crippled recluse who never comes out of Wayne Manor. Why? He’s been retired as Batman for 8 years still brooding over the loss of Rachel even though they had the chemistry of Tom & Jerry in the previous two films.

Selina Kyle is busy masquerading as a maid and stealing pearls belonging to Bruce’s mom which also contains his fingerprints (for a later thread in this convoluted story). Bruce goes Hawkeye on Selina with a bow and arrow and they have a nice chat before she takes John Kreese’s advice and sweeps the leg on that cripple Wayne and hops out the window.

Bruce is intrigued by this chick so he goes to the batcave which looks like it’s been rebuilt even though Batman has been “retired” for 8 years. This scene is basically there to give Bruce his one minute of doing detective work. Alfred finds Bruce in the bat cave and gives the same old tired monologue about how he wishes Bruce would end up as just a regular Joe with a nice family blah blah blah. And to top it off Nolan shows Alfred’s little dream sequence where he sees Bruce in a cafe with his family. Nolan has the subtlety of a sledgehammer to the face so as soon as I saw this scene I knew it was going to come into play later in the film.