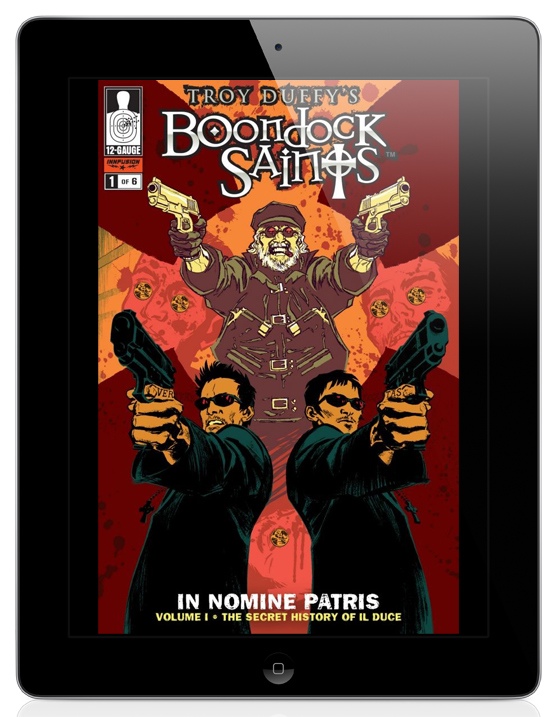 ComiXology has launched the comic based on the cult hit movie, in digital format, making it available for every type of device. For the fans of the franchise, this is a blessing, considering how long awaited new material linked to the Saints has been. After a decade of waiting for All Saints Days to be made and released, having the comic readily available at our fingertips is pretty much the cherry on top.

Here’s a snippet from the press release for the launching event that took place on the 30th of September:

The franchise continues to thrive worldwide in popularity each year with an ever-growing fan base, so extending the brand into the world of graphic novels was the next logical step.  Fully intertwined with the film series and written by The Boondock Saints creator/writer/director Troy Duffy and comic scribe J.B. Love, the comics follow the further adventures of the MacManus Brothers and their mysterious father and “Original Saint,” Il Duce.

“I’m thrilled to have The Boondock Saints comics come to comiXology because they capture all of the exciting, intense, and poignant moments of The Boondock Saints with their cool Guided View reading experience,” said Saints creator, Troy Duffy.  “ComiXology really has a cinematic way of presenting comics.”

With stunning art by Toby Cypress (Batman: Bloodborne, Rodd Racer), Guus Floor, and Chris Brunner (Batman: Legends of the Dark Knight, Loose Ends), the comics have been met with universal praise by the fans, and 12-Gauge publisher Keven Gardner is ready to take the series to a wider audience than ever before.

“Working with Troy Duffy and this great group of creators has been an amazing experience,” said 12-Gauge publisher Keven Gardner, “and by partnering with comiXology we’ll be able to get these new stories in front of Boondock fans all over the world.”

“We’re really excited to have comics from the original creator of the cult-classic movie The Boondock Saints on comiXology and this speaks volumes about the eclectic and ever-growing library of comics available all-day everyday on our platform,” said Chip Mosher comiXology’s VP of Communication & Marketing. “Now The Boondock Saints fans worldwide will be able read these new adventures on comiXology’s platform.”

Comics already available include “The Lost Gig,” starring the beloved character Rocco and the MacManus brothers in a lost scene from the original The Boondock Saints film, as well as the 6-issue “In Nomine Patris” saga, which is the perfect companion to The Boondock Saints II: All Saints Day film. Conceived as a “deleted and extended sequence,” the comic series expands on the story and characters from the sequel and delves deeper into the secret origin of Il Duce.

With over 40,000 comics and graphic novels from more than 75 publishers, comiXology offers the widest selection of English language digital comics in the world. ComiXology’s availability across the iPhone, iPad, Android, Kindle Fire, Windows 8 and the Web makes it the best digital platform for newly interested, current and lapsed comic and graphic novel fans worldwide.*

As a reader of the comic, I can promise it will make your day and help you with the Boondock Saints cravings that are bound to happen, from time to time, to all fans.

What's there to say about me? I love the sci-fi and fantasy genre when I read, but I am in no way limited to that alone. I do think Frank Herbert deserves a statue for his writing(if there is one, point me in that direction, please). I enjoy writing quite a lot, but I am also kinda lazy. If you want to make me happy give me books or Doctor Who collectibles. Or a real TARDIS, in which case I will love you forever.
You might also like
breakingcomic bookComixology