previous
Grab the Sick Bags, It's A DC Valentine's Day Special !
random
next
Top 5 Directors Who Aren’t Doing Star Wars But Would Have Been Awesome…

Rob Liefeld and writer Fabian Nicieza are my heroes – they’ve created the one comic book character I always have a big rubbery one for – Deadpool. Yes… I’m not afraid to admit I’m gay for Deadpool. He has everything I ask for in a character – he’s funny, charismatic, a badass – he’s basically an anti-hero, he has some cool toys and heals like Wolverine. Plus – he’s a massive nerd. I’ve never read a graphic novel and smirked at a character’s inner-dialogue so much… or at his incessant babbling directed at the reader (referred to as “breaking the fourth wall).

Although I got introduced to the character relatively late, it feels like I’ve been reading about the antics of Deadpool aka Wade Wilson aka “The Merc with a mouth” for a long time now, yet I’ve never been disappointed with the results. From his early appearances in New Mutants back in 1991 when he was a villain, to his fights with The Hulk, teaming up with Cable (one of my other favourite characters) as well as facing off against the Skrulls.

I think my reason for enjoying the character so much is that he has a certain moral flexibility that allows him to change his allegiance to suit his needs… plus he’s a psychotic pop-culture addict that constantly spouts movie quotes, which I identify with quite a lot (the spouting movie quotes part… not the psychotic part). 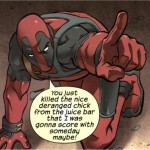 I also liked Deadpool’s appearance in the shocking X-Men Origins: Wolverine movie too (apart from the final act of the movie with the total bastardisation of the character). I think the casting was spot on – Ryan Reynolds is absolutely perfect for the part… but they need to not screw with the character. I don’t actually understand why they felt the need to do so. Deadpool’s abilities are solely related to his Weapon-X endowed healing factor… which resulted in near invulnerability, enhanced reflexes & strength, along with his ongoing psychosis & physical deformity (he had cancer, which although his healing factor counteracted, it also exaggerated the physical side of it giving him horrific facial deformities… hence the mask). He was never able to teleport without the use of a personal teleportation device… he never had swords implanted in his arms, or Cyclops’ beam vision… wrong, wrong WRONG!

Anyway I digress – what I’m trying to say is I love Deadpool… even to the point where I follow @RealDeadpool on twitter. So… imagine my glee when I found out that my favourite loudmouthed movie-loving character was getting his very own game. Sure DP’s been in games before like X-Men Legends 2, the Marvel: Ultimate Alliance games and more recently in Marvel vs Capcom 3 (my favourite iteration of him). But now High Moon Studios are making a stand-alone game for him, and I can’t wait (There’ll also be the Marvel Heroes MMO featuring him coming out soon, and not forgetting Lego Marvel). 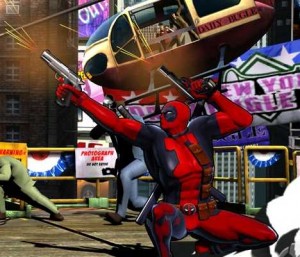 Deadpool’s videogame history has always been as a bit-part character up until recently, used as the comic relief, however his cult fan following and increased publicity thanks to the aforementioned debacle of a movie has had him slowly creep to the forefront. (In fact if you haven’t already, check out the animated “Hulk Vs” movie… specifically the “Hulk vs Wolverine” segment for an awesome depiction voiced perfectly by Nolan North. Argh! Again with the getting sidetracked!)

With High Moon doing a new Deadpool game, I’m hoping they gravitate more towards the MvC3 version of the character than his earlier incarnations… purely on the strength of dialogue and one-liners – they’re already part-way there hiring Nolan North to voice DP. Some of his earlier iterations had him make some really bad jokes… and not like bad as in funny bad. When I first saw the announcement trailer from SDCC last year, I had two thoughts – this could be really awesome, or this could be really bad. Awesome in terms of there’s a multitude of directions they could go gameplay-wise, and they shouldn’t be lacking in humour or quippy dialogue. However I also got a bit of a “Duke Nukem Forever” vibe from the video in places, and we all know how that joke of a game turned out (we had to wait 15 years for that crap!). 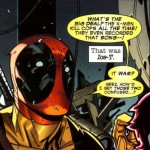 I’m also curious about story lines that could be used in the forthcoming starring role for our (anti) hero. It’s being written by Daniel Way who’s worked on Deadpool before between 2008-2012, along with the likes of Wolverine: Origins, Spider-Man, Venom and the Punisher vs Bullseye series to name but a few. So it looks like the story is in good hands… The series Way was involved in saw Wade Wilson become mortal and look forward to dying for a lot of it, and ally himself with Taskmaster… I won’t ruin it for you though – it’s definitely worth a read. However I’m hoping the story goes in a new direction… but the potential to flick between being a bad guy and a good guy is definitely alluring.

As far as seeing other Marvel characters in the game, you’ll see from the gallery below that Cable is a definite, but it’s also rumoured we’ll see Domino, Wolverine, Death and Psylocke in there too somewhere.

Anyway as I’ve mentioned there’s a gallery of fresh screenshots and concept art below, so take a look, and see what you think. Judging by the mahoosive gun in one shot, it looks to be incredibly fun already in my opinion.

High Moon Studios’ Deadpool game is due for release this year on PS3 & Xbox 360.

Can you feel it when I poke you?

Anyone got a quarter?

Try this on for size, baldy…

Point blank with a P90… nice

Sentinel got on Wade’s bad side…? More concept art

Movie and videogame geek, basketball player, guitarist, waffle connoisseur & expert in being a slacking bastard. You'll find me gaming on PS4 as "SpasmicPuppy" most of the time... I'm addicted to Destiny.
You might also like
breakingCableCapcom