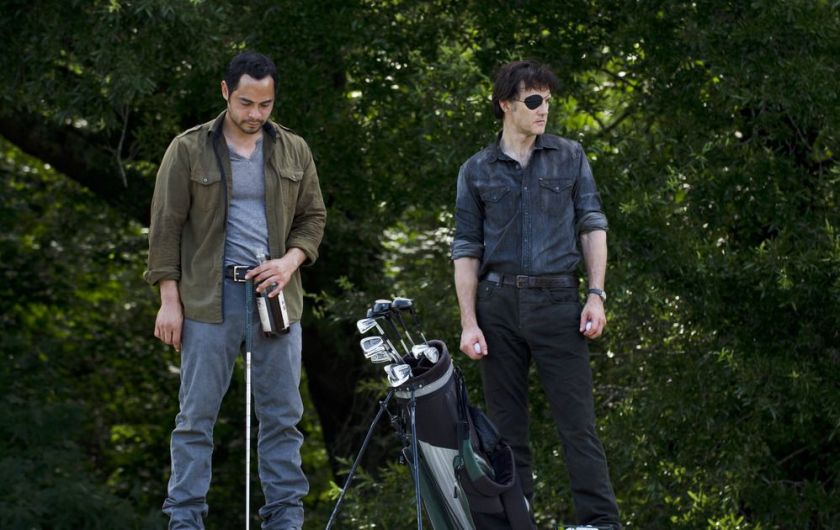 ‘Tell them he died a hero. Everyone loves a hero.’

This season of The Walking Dead has been on a slow burn / long shamble (no, I will not stop using the zombie metaphors!), but it’s returned to the best form of the first series by reviving the Governor. We have, in fact, been given a bit of a ‘bait and switch’ with the last two episodes, with a path toward redemption clearly available to him in the form of his new ‘family.’ 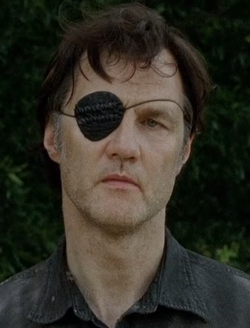 But, like a drip from a leaking roof, the old Governor continued to break in.

Duality was the theme of this week’s episode, reflected often by the choice to shoot the Governor side-on, showing either his scarred side of his untouched one. A motif often used with Two-Face, it allowed the director to show whether the Governor was off the rails. This opened with two intercut scenes, one of the Governor being helped from the Walker Pit, and the other of him playing a game of chess against Meghan, literally battling against his better nature. They discuss his father, who always beat him at everything, and how he was taught that a victory you were allowed was no victory at all, signalling that he won’t go to the side of less-evil without a struggle. He won’t relent.

Following the last episode, I felt we were being shown a reformation, that the Governor would turn his fierceness toward just his family. And, I suppose, that is what happened in this episode. I mentioned a leak in the Governor’s roof, and that’s what begins to obsess him, this notion that where they live isn’t safe enough, good enough, for his wards. Lilly swears that it’s good enough, that repair work could be done, but he is not so sure. And the water continues to drip down.

After going on a run where he’s forced to kill a little girl Walker – echoes much? – the Governor finds himself eating a meal with Martinez, who is the camp’s leader. Martinez, as a relic and reminder of his past, is a representative of the Governor’s failure, and he proves to be his undoing as well: not only does he prevent the Governor from fixing the leak in his roof, metaphorically keeping the madness of his old self out, but he instigates the man’s terrible violence by nonchalantly suggesting, when the two are alone, that their camp isn’t safe and there’s little that can be done about it, unless the Governor helps by taking some control. 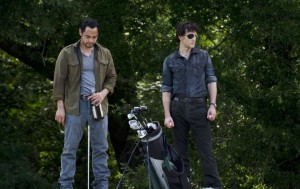 This triggers a murderous episode, as the Governor beats Martinez and throws him to the Walkers in a pit. “I don’t want it,” he shouts as he drags the helpless man over, though it’s uncertain whether he’s talking about the power offered, or the rage-filled survival instinct which triggered.

An amiable military sort named Pete temporarily takes control, supported by his brother Mitch. They go on another run for supplies, and find another camp with relatively little protection, who still have many supplies. In a ‘Good Angel / Bad Devil’ scene, Pete and Mitch argue, and Pete ultimately wins out, saying that they can’t just take what isn’t theirs. However, after a poor run, the Governor finds that the camp has been ransacked anyway: taking the high road has left them with nothing, and someone else now has those supplies.

The Governor, sensing what is to come, makes one last-ditch attempt to not revert back to what he was: he forces his family, and Tara’s new girlfriend, to leave the camp, swearing that it isn’t safe. They drive out in the dead of night, equipped for the road again… but a muddy bog filled with Walkers, who chomp and wail and claw, prevents them from driving out, having a car, which is all that will leave them safe. That is when the Governor knows that he cannot escape, that the world doesn’t want him to leave behind what he was.

The next day, he murders Pete in cold blood, and then goes to see his brother, covered in evidence. He holds Mitch at gunpoint, tells him that his brother is dead, offers him a cigarette, and then relays his own experience of fraternity: how his cruel father found the two of them smoking, but his brother tried to take the blame. Both were beaten badly for their insubordination, planting the seed that heroism is a weakness, that doing what must be done is all that matters. He tells Mitch that he can be the number two in the camp, and that he won’t ever have to worry about ‘doing the right thing’ again, if he helps cover up Pete’s death. Mitch accepts the cigarette, and the offer, in an artfully-realised scene.

His coup achieved, we next see the Governor in the midst of a planning session, looking after the town. Now fully in charge, he is already repeating Woodbury, telling people not to trust strangers, and to report their locations to him. He also draws out on a map a location where they could find a better place to live, somewhere more secure. Lilly swears that where they have is good enough, but the Governor is not so sure.

The case is essentially closed the next day, when, as the Governor is cleaning his eye wound, and being embraced (accepted?) by Lilly for what he truly looks like, Meghan is attacked by a Walker which has somehow made its way into camp in order to menacingly hide behind some sheets. Tara uselessly tries to save Meghan from the attack, but it takes the Governor’s intervention to kill the thing, protect Meghan. Their camp is not safe, and this seems to convince him it never will be.

The episode closes with the Governor standing by the pond where he dumped Pete’s body. Above, it is calm, placid: below the waters, a monster struggles, trying to get out, but tied down by the Governor. Staring at Pete’s struggling zombie, he decides that his own monster must be free. And so he drives up to the Prison, to the Ricktatorship, and watches what is happening (not much). The final scene involves him finding Herschel and Michonne, smiling and happy, alone…

Duality dominated Dead Weight, as it smashed the goodness of the Governor in the previous episode, exposed him once more as the villain we all expected. It sets us up nicely for the mid-Season finale, where the fully-vile Governor will try to take the prison, try to overcome the hero. I, for one, am looking forward to watching what happens.