previous
Save Our Cartoons!
random
next
Marvel Announce Dazzler Movie 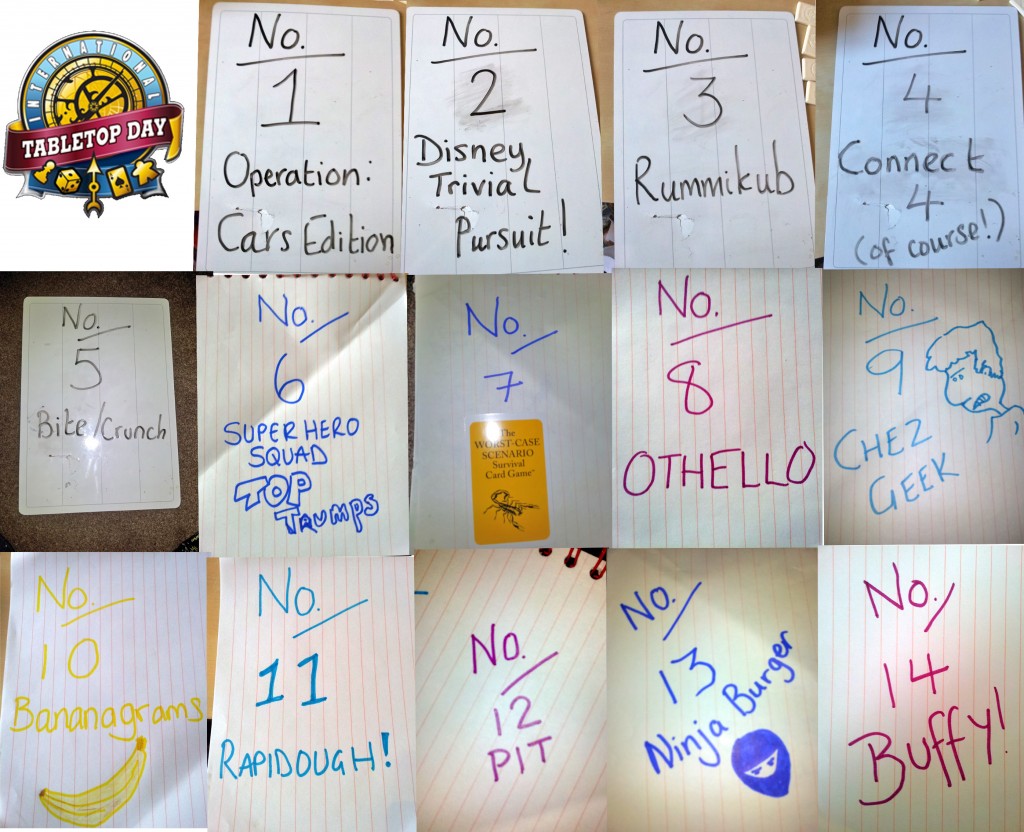 We got a lot done!

On Saturday three generations gathered at my house to play as many table top based games as we could, to celebrate International Table Top Day.  I am proud of what we achieved, not only did we re-visit games not played in years but we had heaps of fun doing it.

Board games and card games have been a hobby of mine since being young. The very first board game I can remember playing is Sorry, not that I can tell you how to play it or the objective. No, what I remember is the laughing and the overall sense of satisfaction of spending time with my mum and sister chasing each other around a board. Similarly Monopoly was a great childhood pleasure, mostly because my sister was so anal with the banking that we made it our mission to rob as much as we could. Yes this ended with her in tears and us laughing our asses off, but that is what is so great about board games, the memories of those epic moments stay with you.

I suppose the argument could be made that there was little else to do in the 80’s, we had a telly with  only 3 channels, some toys and of course the outdoors, but no electrical based device constantly feeding our entertainment needs. It’s a very different world for our children, my daughter alone has 3 devices on which she can play games and mess with apps. So I wondered, with the arrival of International Table Top, whether I could keep the kids occupied for an entire day with no electronic gaming, just cards, boards and counters. Turns out I needn’t have worried.

The day started with the obligatory ‘Keep the kids happy’ section, beginning with Operation Disney Cars edition. Problem with this was the number of awol pieces and the fact that it just frustrated Xander (5) due to his heavy handiness. Really, I considered game 1 a fail. It served to frustrate the youngest attendee and anger the adults with all the annoying buzzing. Still it meant things could only get better. 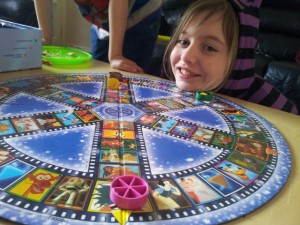 Second up was Disney Trivial Pursuit for the daughter Maddie (10).  This game did come with conditions; I firmly explained in my parental/teacher voice that it would be unlikely we would get to the end of this game. The nature of Triv is long winded and doubly so when you are dealing with a specific subject matter of Disney.  I’ve watched my fair share of Disney films over and over again so you would of thought I had this one in the bag. But despite playing with the easy questions, I found my knowledge of the Rescuers and Oliver’s Company severely lacking.  45 minutes of constant failure was enough.

Interestingly a card based game highlighted a failing in my parenting. My daughter, my very own flesh and blood, was not aware of how to draw cards and return them correctly to the deck. This may seem a harmless problem, but for me it was blasphemy. 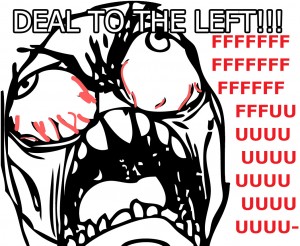 As a child I spent a lot of time playing cards with my parents and siblings, camping in France there is very little else to do come evening time. We would gather and play a range of card games until bedtime. I loved it, but there was one thing that brought dread to each of us, if we dealt wrong my father would shout, loud, and mock your mistake. He would make us start again and do it right. He abides by the rules of cards as taught to him by his father and such he would teach his daughters the same rules. As much as it was the wrong approach on his part, I have never forgotten. To this day I find people who deal in the wrong direction or in the wrong order severely irritating causing me to want to grind my teeth together and flap my hands (Yes husband I’m talking about you).  Thankfully my reaction to my daughter’s faux par was not nearly as shouty as her grandfathers; a little irritated I grant you, but fingers crossed helpful.

The next game on the agenda was a special request on my part, Rummikub, like playing gin rummy with cards but with tiles and time limits.  Another flashback moment for me and I wanted to see if it would bring as much joy to my friends. It started with a touch of difficulty as our derper cat Drew, decided the table was the ideal resting spot.

However, to my great satisfaction after the first couple of turns, my hubbie exclaimed “Why don’t we play this all the time?” He was right, it had sat in a cupboard for over 8 years just waiting. Which is the sad reality of what happens to a lot of games. Stored away until someone remembers that glimmer of excitement and goes to the effort of digging it out.

As the afternoon moved on we covered a few more. Connect 4, a childhood classic for everyone. Shamefully I was beaten by a 5 year old. Not exactly sure how that happened so I’m going to say that I let him win to build his self confidence. Bite/Crunch was another one to keep the youngest busy, a fishing based twist on Snap but easy to make at home. I also had a quick game of Superhero Squad pairs, done in 5 minutes but a smiley satisfied son at the end.

As you are probably aware I am a bit obsessed with Zombie Apocalypse but I am not on my own. My husband and two best friends regularly discuss and plan for such an event, so the four of us took the opportunity to test our survival skills with Worst Case Scenario Survival Card Game. It was a win all round for me really, I came second but my husband won the game. I feel much happier that, in the instance of bad things happening such as being attacked by Kangaroos or riding an out of control camel in a sandstorm, at least I’m with the right fella. With the bonus of being able to handle myself in a gun fight.

What added to the day was our friends and surrogate geek grandparents to our children. They brought along some old school games. Whilst we didn’t get a chance to play them all, the success of Othello surprised me. I will be honest and say that I was extremely skeptical as to whether the children would understand the strategy behind it or whether it was interesting enough to keep them playing. But with the help of the older generation as mentors they handled it fine and I think siblings competing spurred them on. 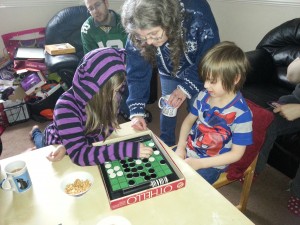 Next came a group favourite and staple to in our game diet for many years. Steve Jacksons Chez Geek, where the aim of the game is to reach your slack goal faster than your fellow housemates. For those of you whom have never played it I implore you add to your selection. Once you get going and know the rules it becomes a great time killer, with plenty of geek based humour to keep you amused. From buying shrooms and playing rpg’s there is something for everyone. What I enjoyed about this particular session was introducing Ricky to it once again. There was a point when I felt may be I should give her some slack and lay off with the harsh cards but when it became clear she had a real chance at winning the punishments began. All in good fun of course.

Words based games are amongst my favourites, but Scrabble would have taken far too long in our endeavour to play as many games as possible. Luckily Mel Santo had brought along Bananagrams. Think Scrabble but no board or points just lots of letters and a race to rearrange all your tiles into some kind of cohesive correctly spelt crossword before the other players. Turns out I don’t work well under pressure. 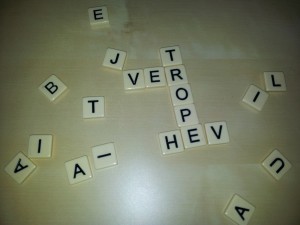 Unfortunately Rapidough was cut short due to food and imminent Doctor Who, but it was nice to see the eldest in the room versus the youngest. Yes this was a little unfair but too cute a photo opportunity to miss. 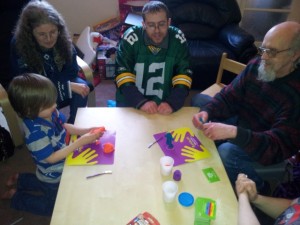 Pit, Ninja Burger and Buffy the Vampire Slayer followed to complete our day at just after midnight. We had done it! Save for a little break for essential Who viewing, we had played table top games for an entire day. I was a little disappointed that Munchkin didn’t get a look in, but then it is a game we already play a lot. The downside of trying to fit in as many as possible, is games with a longer play time didn’t get a look in, no Monopoly, no Zombies, no Muchkin Quest, no epic Trivial Pursuit. Ah well, there is always next time. Overall I am declaring this celebration of table top games a success!

This year we didn’t have a trophy but if I was going to declare a winner of the day, then it would have to be my good friend to whom I will refer to as Ullrakesh. He won the most games and therefore is victorious. But the day wasn’t about winning, it was about taking a moment to dust of those old games and appreciate them for the simplistic joy they bring. They come with the condition of necessary social interactions that enable everyone to have fun, jibe each other, celebrate wins and laugh at funny as hell losses. I am already eagerly awaiting next years event so fellow geeks let the planning begin!

One of my better attempts

I cornered the market in corn! Yay!

Not played this in 10 Years

Editor and occasional writer for Geek Pride! I prefer Star Trek over Star Wars, collect comics and wish I could be a superhero one day. I tabletop RPG as well as a little gaming, design the odd t-shirt now and again, update my Geek Parenting Tumblr and when I have cash to spend (which is rare) I scour the internet for Wonder Woman collectables. Also Doctor Who and Firefly rock!!
You might also like
Ap GamesBecca Harperbecpuss