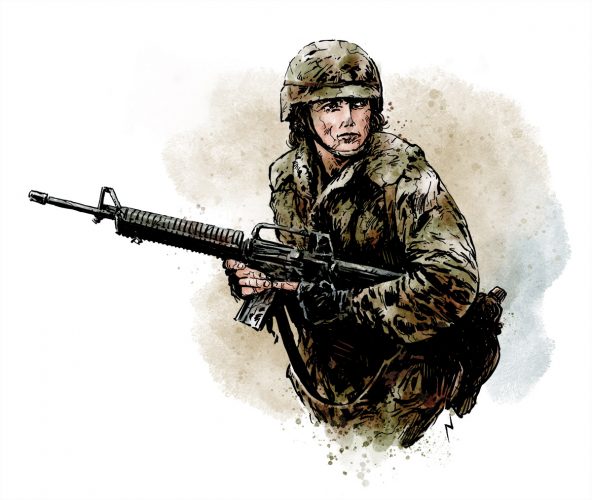 Twilight: 2000 is a military-SF post-apocalyptic tabletop roleplaying game (RPG), which debuted in 1984.  Since then, the game has undergone several editions, with an increasingly – and amusingly preposterous – convoluted backstory behind World War 3.  It also spawned the spin-off RPG Merc: 2000.

This latest edition, by Free League, reboots the setting and utilises an entirely new rules system as a foundation for the game.  Those familiar with previous Free League games will recognise the system, as it is based on the hexcrawling system established in Mutant: Year Zero and Forbidden Lands, but developed further to fit the gritty setting of Twilight: 2000.

The rules system is focused around a twin-dice conflict-resolution system, where one die is for the skill and the other is for the attribute.  The better the skill, the larger-sided dice is used, allowing players to roll higher, based upon how competent their characters are.

Rather than making Twilight: 2000 a modern/near-future setting like the original, it is now set in an alternative history.  Described as “The world war that never was”, Twilight: 2000 posits ‘What if the Cold War went hot?” In some ways, this echoes Tales from the Loop and Things from the Flood, which are also set in that era.  This removes some of the contemporary geopolitics from the game and makes it focused on telling stories about what it takes to survive in such a world.

The core setting for Twilight: 2000 is Poland and Sweden, with a fantastic array of background material, including a detailed map for each area, as well as a broad overview of what is happening in the rest of the world.  Twilight: 2000 also includes tools for players wanting to set games within their own region.  However, the vast amount of information about these settings will be an excellent resource for GMs.

It would be fair to say that previous editions of Twilight: 2000 were beset by jingoistic flag-waving, with an Us (NATO troops) vs Them (Russia) mentality.  This, in turn, was compounded by such a fetishistic approach to guns that it would have even made the NRA blush.

Instead, Free League take a more holistic approach to the setting, highlighting the challenges of surviving in an apocalyptic setting, which are more than just who has the biggest gun.  Survivalism and collaboration are now core themes of the game.  Players can still able to lay waste to vast swathes of the enemy using a machine gun, but dysentery can still kill their characters. 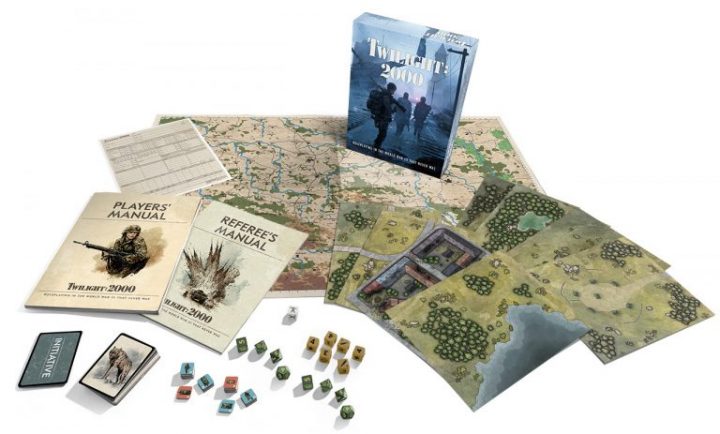 However, this is a world beset by raiders and warlords, setting up their own dominions.  Here the ‘Us’ is the player group and the ‘Them’ is the setting itself, be it warlords, raiders or scavengers. This is a game about surviving after a world war, not during one.

Twilight: 2000 is focused on two styles; typical roleplaying campaigns and what is called “hexscape crawl”.  Stories in Twilight: 2000 campaigns are centred around survivalism and cooperation.  However, the potential stories here are very much location-based.  There are several ready-to-play scenarios included, which are not only great to run but also act as sources of inspiration.

A hexscape crawl is driven by the hex-based maps, where each hex is provides a new situation for the players to encounter.  This essentially mimics the wandering monsters table from classic dungeon-crawls, but each encounter is not necessarily antagonistic.  It is possible to run this as a single-player, as a series of randomly-generated encounters, but I suspect this would diminish some of the roleplaying elements in the game.

One downside of this game is that, by its very nature, the tight narrative limits the types of stories that can be told in a post-apocalyptic setting.  As a consequence, there is a limited variance in the stories: much of the focus is on surviving in such a landscape but there is little on rebuilding society.   That said, with some tweaking, it could be very easy to tell a game in the style of TV shows like Jericho or Jeremiah.

The Twilight: 2000 box-set comes complete with everything that players will need to run the game.  This is no starter set, but a complete game in and of itself.  The box-set includes two rulebooks (player and referee guides), a deck of equipment cards, a pack of dedicated dice, area maps (for each of the settings), and location maps for combat.  Having everything you need to play the game in a box is a rarity.

A complete box-set sometimes indicates that this is all that will be released for the game, but this is not the case for Twilight: 2000.  Urban Operations has already been announced as a future supplement and more can be expected in the future.

Load more
Twilight: 2000The post-apocalyptic roleplaying game Twilight: 2000 returns with a new edition in a boxset that comes with everything needed to play.