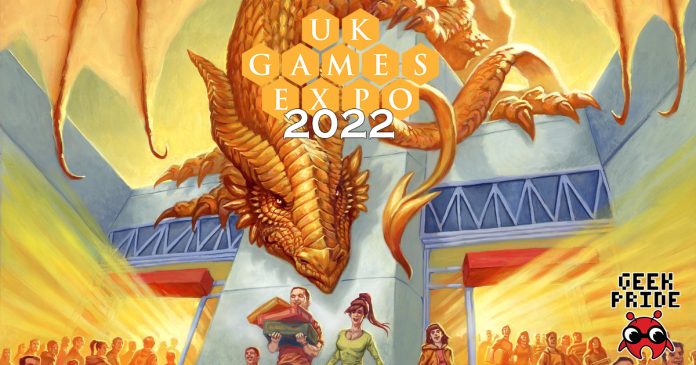 Following the 2020 UK Games Expo’s cancellation due to Covid-19, and last year’s Covid-restricted event (reviewed here), the UK Games Expo enjoyed a glorious return to normalcy this month.  Instead of elbow bumps and social distancing, there were hugs and much-missed friends.

The lessening of travel restrictions also meant that there was a greater international flavour.  This was very much a return to form for the UK Games Expo and was indicative of what the event is all about: a celebration of tabletop gaming, be they board games, card games, war games or roleplaying games.

There is always something new to see and try at the UK Games Expo, as the focus is on creators and developers.  Although traders are present, these are nonetheless in the minority.  A prime example of this was the reveal of War on Terra, a scalable sci-fi wargame that had been developed by a former marine.

One of the developers that were present were Free League Publishing, including the creator Mattias Johnsson Haake (of Symbaroum – reviewed here) and the artist Johan Nohr (Symbaroum, Mork Borg, Cy_Borg and others), who were happy to chat about their work and sign books.

Also in attendance were Modiphius, with their Elder Scrolls: Call to Arms, Fallout: Wasteland Warface and Achtung! Cthulhu games.  They were also promoting Rolls Vs Evil; a charity that provides direct aid to civilians trapped in the Ukraine war.

Modiphius also revealed that they were developing a new era for Achtung! Cthulhu roleplaying, set during the Roman occupation of Europe, where legionnaires investigate rumours of tentacles in the unexplored wilderness.

One of the most anticipated games was The Terminator roleplaying game by Nightfall Games. Although the books are still at the printers, the RPG has just been released as a PDF and is available as part of The Terminator RPG Starter bundle.

The UK Games Expo was also introduced to Rebellion Unplugged, the new tabletop gaming branch of Rebellion Publishing.  Following the completion of their kickstarter, they were releasing their Sniper Elite boardgame, which combined hidden movement mechanics and streamlined gameplay to recreate the videogame experience it was based on.

Solo-play experiences have become popular, and there were several games that offered solo-play mechanics.  One such example was the Space Kraken, a science-fiction dungeon crawler for solo-play, but which also offered an asymmetric multiplayer mode for more than one player.

Salvage Union was another interesting roleplaying game.  Set in a post-apocalyptic future akin to Mad Max and Mortal Engines, each player controls a mech that explores the ravaged wilderness.  What makes this so different is that the gameplay focuses on mechs, rather than their pilots.

The UK Games Expo was more than just games, as there was a plethora of ancillary boardgame products, such as crystal dice and amazing gaming tables (that would also make excellent dining tables for the suitably cunning), as well as a charity promoting gaming clubs across the country.

The event encompassed three halls at the NEC, as well as the Hilton Hotel, which gives an indicator as to the size of the event.  A day could be spent just exploring the exhibitors in the main halls alone, although this would completely ignore the multitude of tournaments and gaming sessions that were on offer.

When the halls closed at six, the UK Games Expo kept going, with late-night gaming sessions (an appropriately atmospheric time for horror games), as well as various evening entertainments like Jolly Boat and The Dark Room by John Robertson – who seems to have become even more gloriously unhinged during lockdown.

Overall, 2022’s UK Games Expo was a fantastic return to form for the UK’s premiere celebration of tabletop gaming.  With people coming from around the world to attend, it has become a highlight of the convention calendar.  We cannot until it returns next year.

Load more
UK Games Expo 2022 Following the 2020 UK Games Expo’s cancellation due to Covid-19, and last year’s Covid-restricted event (reviewed here), the UK Games Expo enjoyed a glorious return to normalcy this month.  Instead of elbow bumps and social distancing, there were hugs and much-missed friends. The lessening of...