There’s something quite satisfying about entering a dungeon, and cleaning out a swathe of undead miscreants in your quest for glory, and booty. Something about being able to dispatch a throng of ten to fifteen enemies in one fell swoop with some explosive lightning or a swing of a hefty battle axe is… liberating. It’s also a great stress reliever after a hard day doing whichever monotonous activity you’ve been subjected to for eight hours or so.

There are many games that offer such a  pastime, yet one particular franchise stands out as a pioneer in this field of swashbuckling hack n slashtacular heroism; Diablo.

Blizzard Entertainment, probably most well known for the virulent MMORPG World of Warcraft and the Sci Fi strategy title Starcraft, introduced us to the world of Diablo back in 1996,  with a title predominantly created for PC and Mac users – there was a diabolical (see what I did there?) port made for the Playstation by Electronic Arts… but we don’t talk about that.

Now the console adaptation has been reattempted, this time with the third  installment of the sword and sorcery dungeon plunder-em-up… and thankfully with rather a lot of love and attention paid to it, and it shows.

Released for Mac and PC in the May of 2012, console users have waited prettymuch a year and a half for Diablo 3, but thankfully the wait has paid off, and the result is a polished and enjoyable experience… albeit with a few loose ends here and there. This is largely (in my opinion) down to the development being kept in-house at Blizzard, and not farmed-out to another developer like EA.

Leah watches as her uncle is swallowed by the chasm

Diablo 3 is initially fairly light on story, with the world of Sanctuary being invaded yet again by the Dark lord Diablo, and the player being tasked with defeating the menace. The initial narrative (told in a rather stunning cinematic) starts with a mysterious falling star hitting a Cathedral in which Deckard Cain and his niece Leah are in researching an ominous prophecy (fortuitous timing indeed!)… Deckard falls into the resulting crater much to the understandable dismay of Leah.

When the player appears as the game’s protagonist, they’re in a town known as New Tristram, there to investigate said falling star… and the infestation of undead pests is rife throughout… then follows the quest to save Leah’s uncle, and investigate further into what the effects are of falling star’s presence.

The story then opens up though the player’s actions, as well as books and tomes located throughout the world, told in a nice voice overlay as you go about your slaying and looting business.

As the player you can choose between five character archetypes; Barbarian, Monk, Witch Doctor, Demon Hunter and Sorcerer. The first two classes are the only melée options, with the other 3 only having ranged attacks. The Monk is the speedy melée fighter, and the Barbarian is the heavy tank character. The Witch Doctor is the class dependent on pets, while the Demon Hunter is the class most like WoW’s Hunter class, utilising traps to gain the upper hand. Lastly the Sorcerer is the “Ronseal” class – it does exactly what it says on the tin… blows the crap out of everything from a distance.

The general game and UI design is pretty robust, with a new radial menu system being used for this console version. This new menu initially feels a little clunky, yet as you use it more and more it becomes second nature. The radial menus are only used when you’re swapping out gear and abilities, or using a vendor or craftsman, and for that purpose it works really well. After about 10 minutes of fiddling, I was switching out gear and adding runes to abilities like a pro. 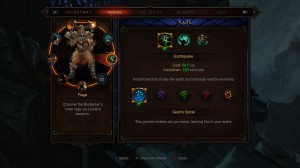 Some nice little touches have been added too – if you pick up some gear and you don’t already have something equipped in that slot (bracers for example), then it auto-equips for you. When you loot gear now you can tap up on the D-pad, and flick through your recent acquisitions, with options to drop and equip without even opening up the character menu. This makes for much quicker gameplay and less stopping and starting.

You get a minimap on the screen at all times, but tapping down on the D-pad expands the map to full screen, tapping down again hides it – again a great addition to speed things along a bit. Pressing left and right on the D-pad is saved for social interactions, like looking at current friends playing and inviting them to groups etc, as well as porting back to home base.

Each new learned ability is assigned to a joypad button, be it the triggers or joypad’s face buttons – there are a few default controls too. L1 is automatically assigned the health pot option, or your inventory slot which I found I’d often use them by accident when I didn’t need to. A new addition specifically for the console version of Diablo 3 is the dodge option, attributed to the right analogue stick. Flicking the right stick in a direction of your choice will cause your character to roll/flip in that direction – a useful option when you’re surrounded by a horde of brain-licking zombies. If I’m honest though I found that I didn’t really use this very much at the beginning of the game, then later on when it becomes useful, I kept forgetting I had the facility available.

The control system on the whole feels good – the auto-aim works well with the joysticks, the action is fast and unrelenting (until you clear the area of mobs anyway)… with the game billed as an Action RPG, it’s definitely more action than anything else – and this is definitely a good thing. 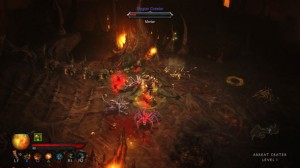 It’s sometimes easy to get overrun

Now players will find that loot drops less frequently, but when there are drops, they’re usually of much higher quality. This also works really well, and by the time I was level 11 with my Sorcerer, about half of my equipment was either “Rare” or “Legendary”.

There is an odd aspect of the gear and loot in the game though. Say for example you’re playing as a Witch Doctor – initially your primary attack is using a blow-dart to damage your enemies. However if you loot a particularly nice dagger, you can equip it and utilise the buffs it provides. This doesn’t sound too bad… however – the Witch Doctor class – like the Sorcerer and Demon Hunter – doesn’t have a melée attack… so what does he do? He still somehow uses the blowpipe. It’s an odd mechanic which can irritate at first, but not too much to quell my need for better loot.

When it comes to Diablo 3’s graphical prowess, it does pretty well. Landscapes are beautifully rendered, and the framrate doesn’t dip even when you’re being plagued by multiple enemies. Enemies are well designed, and some look suitably gruesome  – the vomiting undead witches remind me of the witches from Left 4 Dead, though thankfully they move slower. Boss and mini boss fights are particularly fun, with early bosses being initially intimidating, and quite well designed and animated too. As your level increases, the scope and size of the bosses seem to increase to match.

The sound effects work well to set the atmosphere, with weaponry giving the appropriate chunky noises to give impacts a little weight – the only thing that could accentuate the impacts more would be to provide force feedback into the controller. Enemies sound great, and the voice acting is well done too. I’d prefer there to be on-screen subtitles for dialogue too, but this is only present when you’re going through a story mission – for other talking you only get the on-screen speech bubble with three dots in, so it’s not always possible to play the game with the sound turned down. 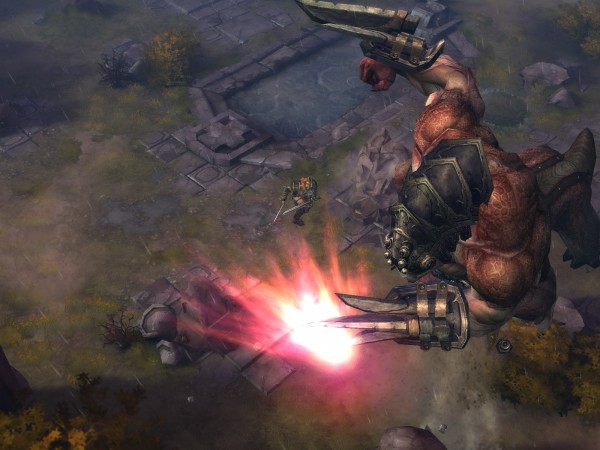 When it comes to mission complexity there’s not much to worry about, but it doesn’t make the game any less enjoyable. The boss fights get more complicated though, with particular techniques that need to be employed to defeat them in some cases.

Rewards from the aforementioned boss fights and quest completion have had a noticeable update from the PC version of the game though – the loot drops have been altered to account for the lack of auction house, and you quickly pick up your first bit of legendary gear… I had my first bit drop when I was about level 11, and it’s lasted well into the 20s already. It’s also possible to have rare gear dropped, as well as crafted for you… for a price. The higher the difficulty level, the more rewarding the loot drops get… so this can be quite a draw for the loot-hungry, but does give the game more replay value as a result.

The multiplayer aspect of the game is exactly as you’d expect – you and 3 of your buddies can either play locally or online, and it’s pretty easy to drop in and out of play. It’s also incredibly easy to migrate your characters via cloud storage or USB too, which should make local gameplay that bit more fun – this is something that most games of late is lacking. I miss the good old days of playing locally with your friends sat beside you, giving you stick when you die and the general banter that goes along with simultaneous multiplayer games. 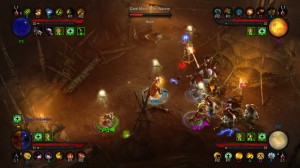 When playing online with friends the loading times do increase slightly while you wait for friends to connect, and while the host is determined – in fact if your host is ever migrated, the game feels the need to tell you in two different terms that it’s doing so.

One thing that did seem a little inconsistent when playing with friends was the loot drops – playing on your own usually involves a constant stream of weaponry and armour drops, but this seemed to diminish a bit when I played with fellow Geek Pride writer Phil. We tried switching hosts, but this didn’t seem to alter. All we noticed is that what did drop ended up being more in-line with our character classes.

The other side of multiplayer falls into the realm of PVP and some of the more endgame content, with the ability to search for particular players being a welcome option.

The overall story is (much like it’s PC brethren) a little on the corny side, but the console improvements outweigh what few gripes I have about the game. Being new to the series of Diablo, I really enjoy it’s third incarnation – I’m rather known for having a bit of a short attention span, but I got a little sucked in to the game and now I’m levelling one of every character type.

I started playing Diablo 3 for the action, but I found myself coming back to it again and again for the ever increasing loot incentive. Let’s just say I don’t see myself putting it down anytime soon.

Diablo 3 is out now on Playstation 3 and Xbox 360. We’ve reviewed the PS3 version.