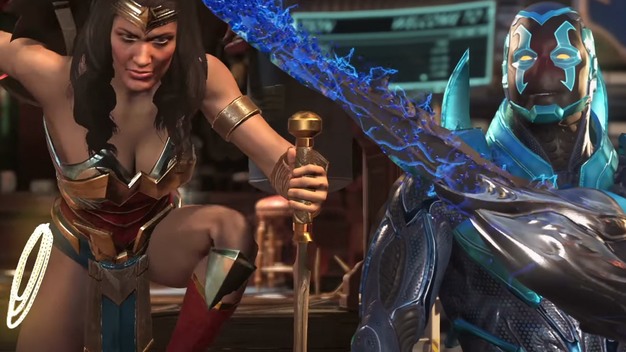 “Did I mention I’m an Amazon?”

Sequel to the hit that was Injustice: Gods Among Us, Warner Bros has once again teamed up with NetherRealm Studios for another DC fighting game a la Mortal Kombat. The game looks to continue the storyline from the previous game, with Batman and Superman once again going head to head along with the rest of the DC superhero roster, all the while a new threat beckons to tear apart the DC universe as we know it.

NetherRealm’s creative director Ed Boon teased that the Injustice 2 panel would reveal new playable characters, and it looks like Wonder Woman and Blue Beetle will be joining DC heavy-weights Aquaman, Atrocitus, Batman and Supergirl. As can be seen below, the trailer also is the perfect demonstration of what the improved gameplay will be like when it’s released next year. In addition to the new trailer, panelist and writer Tom Taylor mentioned that he would be writing a comic-book prequel to the new game.

It’s likely that in the next few months that NetherRealm will continue to unveil yet more of Injustice 2‘s roster, but for now, let’s bask in the entertaining battle between our favourite Amazonian and Teen Titan.

Injustice 2 will be released on Xbox One and Playstation 4 sometime in 2017.