Rich Johnston at Bleeding Cool claims to have an insider scoop on the much-rumoured legendary BBC stash of Africa. 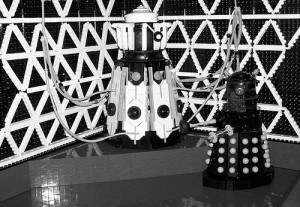 Daleks, the single most iconic monster from the long-running television series.

I’ve heard the rumours plenty of times about the BBC engineer in Africa who has copies of every lost episode of everything ever, or so they say.

According to Johnston we may be in for a treat! His sources indicate that by the end of this year we may well be able to watch Troughton’s 1967 Evil of the Daleks, and many more of his early episodes, and is even speculating about a possible full Hartnell collection!

These are truly lost episodes, many of which haven’t been screened since the very first time. If these rumours are true then it could really be a special anniversary year for Who fans old and new!

I'm Mel, currently living in Sheffield, but originally from the other side of the Pennines. I'm a lifelong gamer, RPing from a worryingly early age, and basically raised as a geek - I don't think I ever had another option! Any spare money I have gets spent on comics, photo gear or lucha masks, and any spare time I have, when not gaming with friends, is wasted on Sims, Minecraft and trashy movies.
You might also like
50th AnniversarybreakingDoctor Who