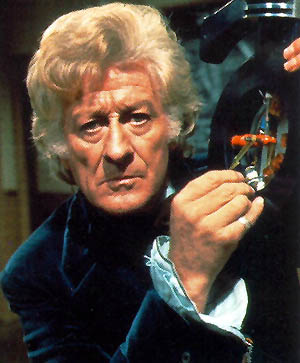 My obsession with Doctor Who began at the turn of the millennium when the BBC were busy dedicating whole nights to their greatest ever shows like Monty Python and Fawlty Towers. I think the idea was as much to expose this kind of genius to a younger generation as it was to celebrate the past century of BBC programming, and it certainly worked on me when I saw the Doctor Who night on BBC Two all those years ago. The strange thing is, they must have talked at great length about all of the Doctors up to that point, but the one that really stands out in my memory, and indeed the one whose adventures I would begin to follow having caught the Doctor Who bug was the Third Doctor.

I can remember coming home after school and watching Jon Pertwee stories on BBC Two, in fact I vividly remember Doctor Who and the Silurians. Classics like these are what turned me into a fully fledged Doctor Who geek, and all these years later I still have a real soft spot for the dandy Doctor who really introduced me to the world of this great show.

The early years of Doctor Who, covering the first five Doctors, can be characterized as following a certain ascension. Through William Hartnell and Patrick Troughton’s reigns not only did the show gain momentum but the character of the Doctor also developed, from a grumpy and slightly sinister old man who had no issue with violence as a means to an end, to a kind-hearted pacifist who sought only to help those in need. When Jon Pertwee assumed the role the Doctor’s character became perhaps the most human it had ever been up to that point, especially during the first serials when he was banished to twentieth century Earth by the Time Lords.

The show itself was evolving too. For the first time a Doctor could be seen battling alien menace in glorious colour TV, and I would argue that Jon Pertwee’s first few adventures as the Doctor are among the best in the entire run of the show.

Our first glimpse of the new Doctor came as he collapsed out of the TARDIS having landed on Earth following the events of The War Games. Typically for the Doctor, he has just arrived in the midst of an alien plot to take over the world, and the race is on to recover from his recent regeneration in time to help U.N.I.T stop it.

There are a few reasons why I think this serial is the best introduction to a new Doctor. For starters it is a tremendous story. The Third Doctor’s first adventures were heavily influenced by the Hammer Horror films which were at the time taking Britain and the World by storm. There was a creepy, suspenseful atmosphere to these stories, which I feel was perfectly captured right from the very beginning through the terrifying Autons.

And there are geeky reasons too. Long term fans of the show will note that this was the first regeneration story in which the Doctor stole his new wardrobe from the hospital in which he was interred. Something later repeated by the Eighth and Eleventh Doctors.

I guess I’m regressing into reviewer mode when I say that Spearhead From Space is one of the very best Doctor Who stories ever and that if you haven’t seen it then you simply must check it out. But hey, it is Doctor Who Month after all!

It was not just Jon Pertwee’s indelible characterization as the Doctor which made his time on the show so significant, there was also the introduction of arguably the Doctor’s greatest companion. U.N.I.T. who had made two previous appearances in Patrick Troughton serials, would hereafter became a regular part of the Doctor Who landscape, particularly the man running the operation; Brigadier Alistair Gordon Lethbridge Stewart. While this character would go on to feature in stories alongside every other classic era Doctor, both on TV and in unofficial channels such as audio and literary adventures, I say his chemistry with the Third Doctor stands out. The Doctor is defined by his nomadic nature, and being curtailed in one location in the space-time continuum has a suffocating effect on him. The hilarious side-effect of this is that he now has to answer to somebody, and that person is the Brigadier. The two of them grow into great friends, but oh how the Doctor wishes he didn’t have to rely on him so much. 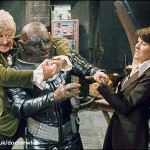 Another companion introduced during Pertwee’s time as the Doctor was Sarah Jane Smith, played by Elizabeth Sladen. Though perhaps most well known for her time as the Fourth Doctor’s assistant, it was with the Third that we first saw Sarah Jane’s precocious and inquisitive nature which endeared her to the nation’s hearts. She was with the Third Doctor in his final moments as he regenerated into the Fourth, and although Pertwee’s time on the show was coming to an end, Elizabeth Sladen’s was only just beginning.

It was not just iconic companions who would first appear during The Third Doctor’s time on our screens. One of his greatest enemies would also make his mark. By the time Jon Pertwee became the Doctor the character’s arch-enemies had already been established as the Daleks and the Cybermen, but it was intriguing to see an enemy who was entirely unlike those adversaries. Someone who was so similar to the Doctor that, had he not been evil, could have proved a great ally (as indeed he would end up being on certain occasions). Whereas the Doctor was entirely defined by selflessness and going out of his way to help people, the Master was utterly ruthless in his quest for absolute power, and as a fellow Time Lord he not only gave the Doctor a diametric opposite to bounce off of, but also a window into the Doctor’s past through which we could learn more about the character.

One thing which Jon Pertwee’s Doctor is perhaps most remembered for is his catchphrase, a signature all-purpose bit of gobbledygook which could get him out of any situation. Yes, it seemed that there was not a problem in the universe that couldn’t be solved by reversing the polarity of the neutron flow. Indeed reversing the polarity of anything seemed to do the trick. They’ve alluded to this phrase already in the current series but watch out for a sneaky mention in the Day of the Doctor, you know it’s coming.

The era of the Third Doctor was undoubtedly a significant one for the show due to its introduction of characters, monsters, catchphrases and even a signature car to the Doctor Who ethos. But let us not forgot the primary ingredient for the success of this year three period, the performance of Jon Pertwee, who gave us a sophisticated and utterly charming Time Lord who passionately argued for peaceful solutions to inter-galactic conflicts while karate-chopping his enemies to the ground. What a guy!

Prolific writer attempting to slowly take over the internet through various explorations of cinema, heavy music and everything in between.
You might also like
AutonsbreakingDaleks