Michael Bay can be a little hit & miss sometimes, but thankfully when it comes to tne Transformers franchise, he hasn’t done too bad (save for the awful Revenge of the Fallen).

Today Bay has released a photo of the new Optimus Prime design to be used for 4th in the franchise, imaginatively titled Transformers 4. 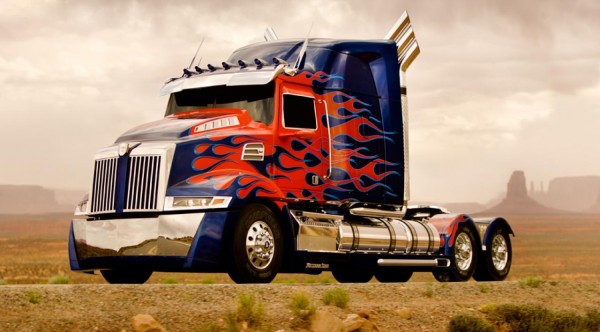 This is only the truck iteration – we’re yet to see any robot designs for the movie, but have been shown a couple of photos of two other unnamed autobots also in car-form (below).

Prime’s new design is a custom-built rig from Western Star (a subsidiary of Daimler Trucks North America), and the other two autobot vehicles are a C7 Corvette Stingray, based on Chevrolet’s upcoming 2014 production car and a $2.4 million Bugatti Grand Sport Vitesse. Nice.

What do you think? To be honest I’m loving the Corvette & Bugatti, but not that jazzed about Prime’s chunkier yet sleeker look.

Movie and videogame geek, basketball player, guitarist, waffle connoisseur & expert in being a slacking bastard. You'll find me gaming on PS4 as "SpasmicPuppy" most of the time... I'm addicted to Destiny.
You might also like
autobotbreakingcars