The Sega Genesis was a system inundated with side-scrolling shoot ’em ups, Thunder Force 3 was the meillieur des meillieurs. Critics, SCHUMP fanatics, and casual players alike, were endeared to the game.

Technosoft’s Thunder Force series got better with each successive release. Thunder Force II was once revered a classic by many, but detractors slammed its overhead levels as an unnecessary evil that shames a shooter filled to the brim with intense side-scrolling stages. Thunder Force III rectified that niggling issue, and more.

The soundtrack is particularly unforgettable, especially the default opening level theme, and the music that accompanies the aquamarine annihilation that is usually level three (if you play it in sequence). The first set of levels are all selectable from the beginning.  I have been humming the tunes in showers til this day! 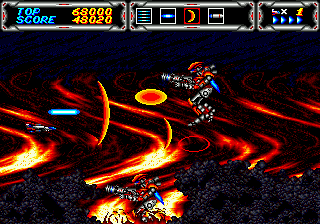 TF III’s graphics are what caused people to sing its praises at the time of TFIII’s release.  Indeed, “Greatness comes with Simplicity”. A specific graphic element in one of the stages had my mouth agape, impressed at how far it seemed to push the hardware of the Genesis. Enter Gorgon, and if you are a Sega fanboy, pride will be an prodigious emotion, lurking immediately behind awe. This level features a substratal landscape, decorated with an undulating canvas of  raging and hypnotic flames. It remains one of the greatest spectacles burnt in my retinas on the Genesis. 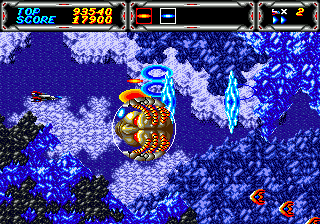 TFIII’s magnificence extends much more than one level, one sumptuous serving of eye candy, however. There is Seiren, the precedent water stage, which boasts areas with whirlpool-like effects that pull your ship out of control and often into peril. Haides, the earth level, is fraught with moving platforms of rock that fall and rise resolutely to crush your spacecraft. A simply illustrated, yet strangely beautiful Ellis, composed of blue sky and blue ice, holds crystalline fingers that long to spear you, retracting only when a barrage of bullets is your response. These levels are all waif-like in appearance, as if vivacious character cut-outs were pasted upon an abstemiously painting realized on construction paper. The result is a simplistic beauty that you will either embrace, or reject, depending on your aesthetic sensibilities. 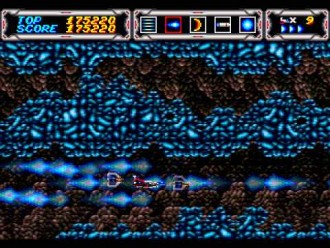 But where TFIII really takes off – separating itself from a deluge of generic similar Genesis shooters – lies in its gameplay. Having seven weapons that can all be collected and simultaneously kept onboard adds a measure of strategy to a mindless genre often lacking it.

There was a sound trick I use to ensure my survival. If you are about to die while using your favorite weapon, say the Hunter, you can switch quickly to the standard issue twin shot to avoid this loss. Then, as you respawn at exactly the point of demise, your Hunter will still be selectable from your ship’s cache of weaponry. Admittedly, you need good timing to pull off the trick.

Destruction is the name of the game as the seven weapons can each be powered up threefold with options called Claws that encircle your craft, both augmenting your ordnancel and protecting it from smaller enemy bullets. As a defensive measure, a  shield is also available to you, and with it, and both craws and a standard weapon, you will become inordinately powerful.

Perhaps too powerful. And that would be the Achilles Heel inherent in TFIII’s design. Having not played the game for an extended period of time before getting my Genesis out of the storeroom, I still seldom collided, needed none of the copious continues on offer, and finished the game with eight ships in reserve, all in approximately thirty minutes. That said, I’m not exactly a noob gamer.

The wide plethora of awesome, creatively conceived bosses, deserve a boost in durability. They need to withstand longer than ten seconds each when confronted. Also, the extremely forgiving difficulty curve is a drawback to those hard core fans seeking a shooter with teeth that bite.Thankfully, there is a hidden option available at the title screen that unlocks Hard and Mania levels of difficulty that should appease these players (like me).

Curiously enough, many other shooters that can be beaten this easily, are not remembered with the same fondness and reverence that TFIII is. I looked upon those games  with disdain and indifference, conjuring up images of me blasting through them and then disposing them into some forgotten cupboard filled with abandoned shooters never to be given another thought.

This is not the case with Technosoft’s rapid, engaging, yet accessible interstellar battle. It manages to accomplish the nearly impossible feat of being a pushover with panache; a universally getatable romp with intense stretches and stunning 16-bit presentation to hold your interest.

You won’t doze off playing it, but you certainly won’t throw your controller out of the window. The shooter manages to impart an inexorably friendly personality upon those who play it even for a brief moment. Give Thunder Force III more time, crank up the difficulty, and this passion will only intensify.

I do not belong to the lower, middle, or upper classes, I'm in a class of my own! I AM KING DARREN!!!
You might also like
Sega Genesisshooters