Craig and his long-suffering housemates

A quick, fun, easy to learn game if you have a spare half hour and enjoy rolling dice.

Dice Masters. A collectable “dice building” game by WizKids first released back in April 2014. With over a year and several expansions and variants under its belt, Dice Masters has maintained a solid player-base and has expanded across several creative licenses.
Originally the game started with Marvel Comics leading the way with the Avengers VS X-Men set, closely followed by Uncanny X-Men and now its latest Marvel set, Age of Ultron. There’s also a DC expansion for us Bat-fans, with a Lantern Corps set on the way this Autumn.

Dice Masters has now branched away from comic books and into other gaming formats with two of its newer sets: Dungeons & Dragons and Yu-Gi-Oh.

“But Craig…” I hear you exclaim, “There’s already enough collectable merchandise for these two games. Do we really need more?”
Yes, dear reader. Yes you do. And I am about to tell you why… 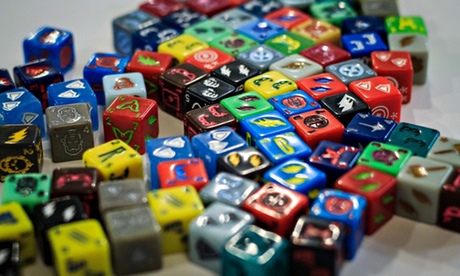 Firstly, what is a Dice Building game?
Well, similar to the increasingly popular format of Deck Building games, Dice Masters follows the principle of building a reserve of resources to purchase better dice and recruit creatures/characters and then have a big ol’scrap to see who wins.
There are also “action dice” which can be purchased by either player, causing a variety of different effects to the game to either help or hinder players.

The Yu-Gi-Oh version of this game echoes the main style of the card game in essence, with monsters being represented on the character dice and the spell and trap cards being represented by the action cards. Each dice has an ability similar to those in the card game or anime series and overall it makes for a very enjoyable experience but is probably more aimed at fans of the anime, as when I played the starter game I found myself making several references to the Dungeon Dice Monsters game within the Yu-Gi-Oh world.

Now, Dungeons & Dragons. I love D&D (more on this in future articles, I promise). I love nothing more than gathering an adventuring party of friends and riding forth towards uncertainty and tales of epicness, or just cavorting with rogues and tavern wenches. For me, the D&D Dice Masters set didn’t seem to capture that same sense of adventure. It brings an interesting dynamic of Heroes and Monsters to the game, with the Hero dice having an “experience” mechanic so that a Hero dice can become stronger with time, but overall I found this particular incarnation of the game to lack that certain charm. Don’t get me wrong, this is still a fun game, but it just doesn’t seem to do the source material justice in my opinion.

My one main gripe with this game however is that the rulebook is a little unclear on more competitive, higher level play and some more complex rule interactions.

Overall, I enjoy Dice Masters; I really do. Just ask my local retailer. In short, I would definitely suggest finding one of the two player starter sets and splitting it between yourself and a friend to learn the basics. It’s what we’ve done in my house and we love it!
It’s a very enjoyable game with very easy to learn rules at a beginner level (outlined in the starter set rulebook) and with not a huge investment factor, with the 2-player starter sets costing between £12-£15 and booster packs having an average retail price of only £1 for two random dice and their corresponding cards.

Let me know about your own dice rolling, monster stomping, smack talking, tea drinking evenings in the comments. I’d love to hear some stories about your game nights.

In the meantime I am and will remain Craig.
Thanks for reading.

Craig has been raised on geekery from a young age when his Mum introduced him to Star Trek the Next Generation on TV as a kid. Since then, he has gained a wide love of all things "Geek", be it books/comics, cinema or gaming in all formats. He has a particular keen interest in all manner of RPG, be it on a tabletop or in a field larping.
More Goodness
collectablesD&DDice