Still at prototype level
Needs a more detailed instruction manual
Promises to be so much more - Fund it when it's live!

There are two things that I enjoy in this world.
Well, there are lots of things, but among them, two are cards games and espionage; that is to say reading/watching spy stories, not actually partaking in espionage… Honest. You can’t prove anything!

Now while my hard drive is slowly wiping itself of anything incriminating, let me distract yo-I mean, umm, talk to you about this new card game that’s been sent to me by the lovely people at Wilderland Campaigns.
It’s called Sub Rosa – Spies for Hire and is a tactical bidding game where you, the player, are the head of an international spy agency (I like to think I’m the head of Isis from Archer) and must spend their resources to recruit the various free agents that are randomly dealt at the start of the game.

These agents each have different abilities which, using special tokens available to each player, you can use to manipulate the game by either moving agents around or preventing them from being bid upon in a turn.

This game has been created by Robin David, who is no stranger to the tabletop gaming market, having a number of print and play games under his belt including The Martian Investigations, a sleuthy detective game which has received a number of good reviews from various sites.

I feel it is at this point where I should say that the game is currently still only a prototype, albeit a complete and working prototype, but this did lead to a few issues during my playtesting which I’ll cover in a moment. The game is looking to be put up for crowdfunding on Kickstarter later this year and I do suggest that you keep an eye out for it because this is, downsides aside for a moment (I’ll get to them) a very quick and fun experience that does offer a good level of depth from such a small game. 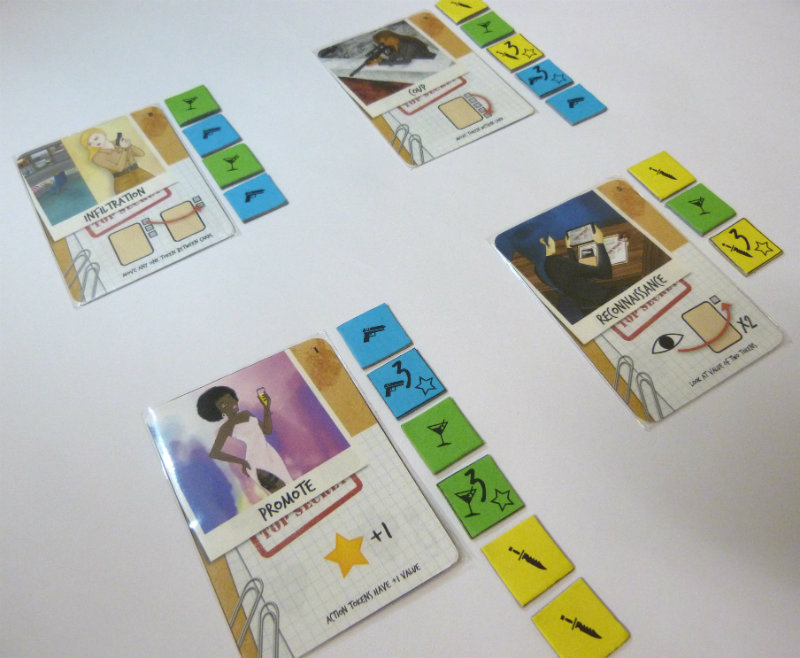 This game is in full swing between three players.

I found Sub Rosa to be aesthetically very charming, with interesting character designs that tick a number of spy genre trope boxes. However, with the game currently being only a prototype, I found the lack of a full instruction manual to be a bit of struggle when getting my head around the game but after a few games and a bit of head knocking, we figured it out and found the end result to be a much smoother and fluid experience but without a much more detailed and in-depth instruction manual, I can’t be sure that the game we played was in fact the game as intended, so I still found the overall experience to be somewhat hampered by this.

The tactical element of the game, however, I found to be very enjoyable. It keeps players on their toes – Do they want to make a push for that extra agent, or should they conserve resources to maintain their existing staff and try and hold on for another turn? Do you want to offer allegiances to try and push another player out and claim their agent(s) with a calculated joint effort? Do you risk everything and stab your ally in the back, taking their agent while their resources are diverted elsewhere?
This is the sort of game where you can really sink your teeth into the plotting and scheming and will no doubt cause an argument or two, but all’s fair in love and espionage (so I’m told).

I feel as though, once funded and polished a little more, this game will definitely be one to watch.
As mentioned, the game itself flows very nicely and does encourage a lot of player interaction, so it’s a good one for a game night with a few friends, maybe takeaway and numerous beverages of your choosing (please drink responsibly).
But, for the moment, until I see a more detailed instruction manual and a few more bits of polish, I don’t feel as though I can give a higher rating to this game.
Don’t read this as it being a bad game – it’s most certainly not! Read this as encouragement to watch out for this game and fund it when it hits Kickstarter later this year so that it can get the backing it deserves and we, as players, can get the fully realised game that I know Sub Rosa can be.
If, in the meantime, you want to give the current prototype a try, Sub Rosa is available for free as a print to play game here.

Until next time, I’ve been Craig, but perhaps it’s all just been a cover.

Craig has been raised on geekery from a young age when his Mum introduced him to Star Trek the Next Generation on TV as a kid. Since then, he has gained a wide love of all things "Geek", be it books/comics, cinema or gaming in all formats. He has a particular keen interest in all manner of RPG, be it on a tabletop or in a field larping.
More Goodness
Card Gameespionagemultiplayer