previous
Will the new Doctor be revealed tonight?
random
next
Porcelain: A Gothic Fairy Tale is finally hitting the shelves! 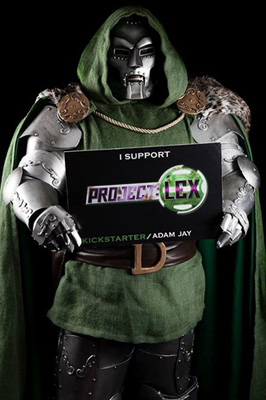 Project Lex is a dream project inspired by the opening cinematic for The DC Universe Online.

This will manifest as a cosplay shoot of a scale not yet seen featuring several characters including Lex Luthor, Superman, Batman, The Flash, Green Lantern, Wonder Woman, Cyborg & The Joker.

Other characters including Black Adam, Green Arrow, Deathstroke, Catwoman & Harley Quinn may also be featured if the funds are there.

In return for your support you can get rewards ranging from a postcard featuring the character of your choice to actually featuring in the shoot being taken out by Lex Luthor or saved by Wonder Woman (reward does not include flight/travel).

Andy Haigh started writing to counteract the brain atrophying effects of Retail Hell, now it's an addiction. Andy is an unrepentant sequential art absorbist and comics are one of his passions. Other interests include Film, Music, Science Fiction and Horror novels and quality TV like Game of Thrones. He can talk about these at great length if only someone would listen. He lives a somewhat hermit like life in The Shire, spends too much time on social media and is still waiting to go on an adventure.
You might also like
BatmanBlack Adambreaking