Imagine a world where 95% of humanity has left the Earth. Disembarking on huge space faring vessels to seek out a new home, one where they don’t have to contend with 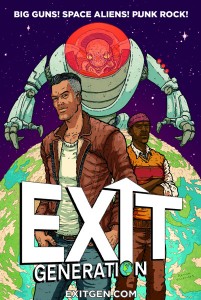 overcrowding and a lack of resources.

Flash forward 30 years and think about what life must be like for those still on Earth.

This is the premise for ‘Exit Generation’ a new self-published comic from writer Sam Read and artist Caio Oliveira.

In this future the Earth has become a tranquil and idyllic place ,with plenty of resources to go around war is now a thing of the past.

Jack lives in this idyllic world spending his days hanging out with his friend Mo. Jack has developed an obsession for cultural elements of the past, with action films and the anarchic energy of punk music being just two of his favourite things.

Jack is bored though, tired of living off the excitement of the past and wanting something to happen in the present.

His wish is granted when a group of extra-terrestrial visitors show up and Jack realises that maybe boredom isn’t so bad after all.

If you’d rather get your hands on a physical copy then they will available at  the Thought Bubble Convention in Leeds, UK, where writer Sam Read will be there (Table 2 in the Royal Armouries Hall to be precise) to answer any questions you may have.

Andy Haigh started writing to counteract the brain atrophying effects of Retail Hell, now it's an addiction. Andy is an unrepentant sequential art absorbist and comics are one of his passions. Other interests include Film, Music, Science Fiction and Horror novels and quality TV like Game of Thrones. He can talk about these at great length if only someone would listen. He lives a somewhat hermit like life in The Shire, spends too much time on social media and is still waiting to go on an adventure.
You might also like
breakingCaio Oliveiracomics