previous
Kill your characters: Why Batman needs to die
random
next
Google Apologises after AR Game Goes Too Far

Board games suck! And here’s why…

OK, don’t let the post title fool you; I love board games. My collection is pretty massive, ranging from 5 minute card and dice games all the way to the epic 8 hour slug-a-thons with cool miniatures and card board tokens festooned across the table. So when I scroll through my social media feeds and see this article on the Telegraph website, my hackles go up like …

In short, the ‘journalist’ who wrote this based a huge number of his summations on a survey conducted by that well-known mogul of the tabletop gaming industry, Barclaycard (seriously?!) The questions referred to whether children these days play as many board and card games as their parents. Of course, if the titles in the survey are games like Happy Families or Monopoly, what chance do these have against the likes of Candy Crush Saga and Age of War in this age of the smart phone and touch tablets? Predictable, the children in the survey played fewer games than their parents.

How can board games really compete with the smart generation?

Harry ‘Wally’ Wallop then goes on to spew forth asinine comments, half-baked generalisations such as blaming the poorness of seventies television for people playing more board games as ‘time killers’, or how nearly all board games are badly designed cumbersome lumps. The final nail in Wally’s attempt to be an authority on tabletop gaming is this:

Really?! Board games aren’t educational? Interesting? FUN!?! The tabletop gaming scene is going from strength to strength every year, with dozens of games released monthly. The crowdfunding platform Kickstarter has hundreds of board games, card games, miniatures and gaming peripheral projects uploaded each year. New board gaming cafes are opening around the world all the time, including at least three more in the UK following the success of Thirsty Meeples in Oxford. Not only that, but the UK Games EXPO, Britain’s largest tabletop gaming event, has year-on-year increased it’s venue size to accommodate the steady growth of attendees.

So where is Wally coming from? No idea guys. This is a clear example of piss-poor journalism, where a scant wisp of information has been spun out with a hefty dollop of personal opinion, clickbait comments designed to incite rage and tripe. Even the most basic of Google searches would bring up boardgamegeek.com, the Dice Tower network and Wil Wheaton’s Tabletop series on Youtube. All of these show how strong the tabletop gaming community is and the growth it is experiencing. 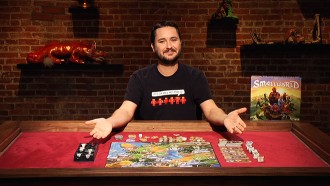 This guy has done so much for the industry; maybe look him up Harry?

So Harry and the Telegraph at large, please do your research. Articles like this just cause damage amongst the uninformed and rage amongst the fanbase. If you fancy an education, just give us a call in the comments below; I’d be more happy to show you the error of your ways with a round of Catan or Lords of Waterdeep!

So folks, what do YOU think? Board gaming is a tedious time killer or a great way to spend an evening with friends and family?

An avid board and card gamer, this displaced Cornishman has spent way too much time playing games and skulking around his local hobby shops. He later escaped to Swindon, the land of roundabouts, where he currently designs games whilst infecting those who stand still too long with his gaming lurgy.
You might also like
boardboard gameCard Game