Great for fans of the recent Dredd film and new readers to pick up.
A genre defying example of why Judge Dredd has been going so long.

Some of the distinctly British humour may be lost on some.

Dredd and the Justice Department have to deal with a mayoral election to replace the beloved but presumed dead Mayor Ambrose, the return of serial killer PJ Maybe, a mysterious assassin and a Judge Cadet is having disturbing visions of events of election day and it’s all connected to one of the darkest events in Dredd’s past.

Day of Chaos is the biggest story in the history of Judge Dredd, so big in fact that it’s been split into two books this being the first.

This story is a follow up to The Apocalypse Wars where Mega City One was decimated by the Soviet East-Meg One. A poisoned water supply lead to mass riots or ‘block wars’, with the Justice Department distracted East-Meg One launched a nuclear strike killing millions of citizens and destroying half of Mega City One. An invading army forced the surviving Judges underground and a prolonged guerrilla war began between the Judges and the invaders. Dredd and a small commando unit managed to fight their way to one of the nuclear silos in East Meg One and in one of the most polarising actions in the characters history Dredd passed sentence on East-Meg One, eradicating it from the face of the Earth.

Now 30 years later in Day of Chaos, the long dormant survivors of East-Meg One begin their plan for revenge. 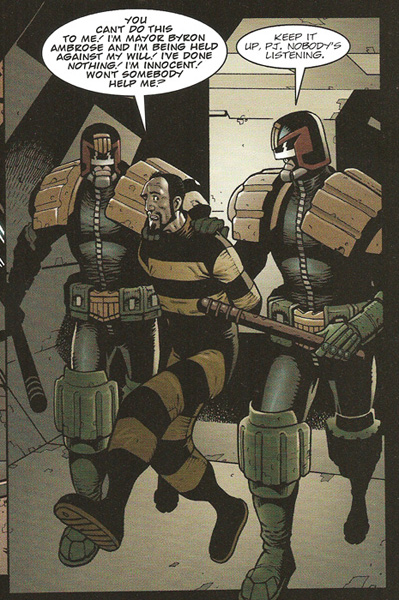 The Skinning Room is based around a serial killer with a talent for skinning his victims. It shows Dredd’s hatred for the mind numbing tedium of bureaucracy, enduring seemingly endless council meetings when he knows his place is out on the streets of the Big Meg. It doesn’t really connect to the following stories although it does do a good job of portraying the state of Big Meg, with crime on the rise and cadets and judges from other sectors being drafted in for Dredd’s crackdown.

Some different facets of the Justice Department feature with specialist snipers being shown with their own adapted helmets and hover bikes.

There’s some twisted humour like the killer living in Ed Gein Block and the use of film posters starring ‘Urb Karlan’ (get it?) is one of those touches which really shows some thought is put into even the minor details. Another of those being the appearance of the eagle of the Justice Department making a rather risque cameo at the conclusion of the story.

Hot Night’ further cranks up the tension as scattered riots start appearing with Dredd having to maintain order in an unfamiliar sector. The reappearance of Judge Hershey gives Dredd someone almost as infamous as himself to dialogue with and the pair work well together. The story gatecrashing an eating contest between two ‘flabstars’ is the kind of thing you wouldn’t see in anything other than Dredd.

There’s some great satire with a stone seller saying his stones are marked ‘not to be thrown’ and how it’s not his fault if someone purchases stones from him and then chooses to throw one and instigate a riot.

PJ Maybe’s story makes great use of face changers, with the Chief Judge deciding that Maybe will need his face changing in order for him survive and he is the subject of a study into sociopathic serial killers which is the reason that he hasn’t been executed despite Dredd’s opinion on the matter. Maybe’s narration being full of grammar and spelling mistakes is a neat touch too. 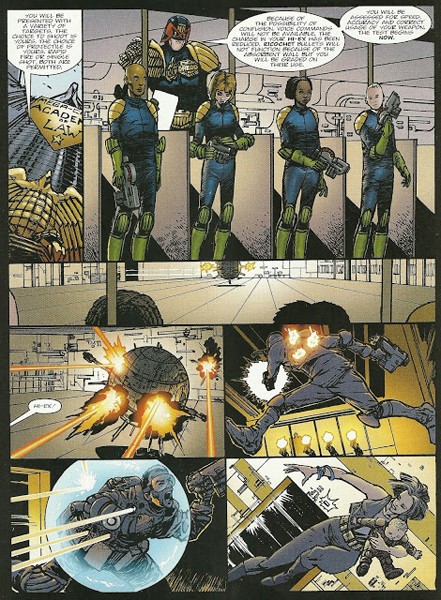 Dredd at the Academy of Law.

‘Nadia’ introduces the mysterious assassin Nadia who manages to kidnap a scientist and the predictions of Cadet Hennessey don’t have the desired effect with an ending that is genuinely surprising. There’s more satire in the form of political party broadcasts on behalf of ‘Apathy the party that couldn’t care less’ in the run up to election night.

The Fourth Faction introduces Yevgevny Borisenko who has a deep burning hatred of Dredd but has played the waiting game moving all his pieces into place whilst Elusive features the conclusion of the election day story, Maybe’s plan and shows Dredd has managed to avoid his council meetings by teaching at the Law Academy instead.

One of the best things about Judge Dredd is the setting and the world and this volume is a brilliant example of why. Mega City One in all its sprawling, technicolour madness is one of the best characters in Dredd.

There are several artists on this book and while normally this might make for a grating effect when transitioning between art teams here it actually adds rather than taking away and it’s interesting seeing the different takes on Dredd and the rest of the characters.

A book based on a character that has been around for decades might seem daunting for new readers or those that haven’t read any Dredd stories for years but Keith Richardson’s foreword details all the backstory needed since chances are most readers weren’t even born when The Apocalypse Wars was originally published.

Ideal for anyone who saw the recent critically acclaimed Dredd film and wants to explore the source material.

Andy Haigh started writing to counteract the brain atrophying effects of Retail Hell, now it's an addiction. Andy is an unrepentant sequential art absorbist and comics are one of his passions. Other interests include Film, Music, Science Fiction and Horror novels and quality TV like Game of Thrones. He can talk about these at great length if only someone would listen. He lives a somewhat hermit like life in The Shire, spends too much time on social media and is still waiting to go on an adventure.
More Goodness
2000ADColin Macneilcomics