There’s a new online short film, set during WWI, titled “Coward,” which highlights how some soldiers were affected and treated during the conflict ( it certainly can’t be accused of glamorising war). The previous work of the cast and crew involved includes quite a few critically acclaimed films. It’s well worth a watch and can be viewed here:

“COWARD” from Stephen Murphy on Vimeo.

Here is some information taken from the press release:

Coward is a 28 Min film set during World War 1 that brings to light some of the brutal treatment soldiers received for suffering what would now be known as shell-shock.

It follows two cousins, Andrew and James, from their home in Northern Ireland who join the British Army to fight for their Country and make their families proud.

Through their eyes we see the reality of life on the front lines.

David Roddham is a vibrant new Director who trained as an SFX technician working on some of the biggest FX movies in recent history  (Snow White and the Huntsman, Cold Mountain, Black Hawk Down). His previous short film “Fifth Street” won numerous awards on the festival circuit in the USA and Europe. He is represented in the UK by Anthony Mestriner at Casarotto Ramsey & Associates Ltd.

Coward was produced by David Roddham, Dave Komaroni, oliver Ager and Neil Corbould, who between them have a wealth of experience in the film industry. Neil Corbould is also an Academy award winning SFX Supervisor whose credits include World War Z, War Horse and Saving private Ryan. Together with Nick Moran as an Associate Producer this is their first venture under the banner of Different.

Coward was influenced by classical cinema harkening back to the era of David Lean where everything was captured in camera rather than created in post production. 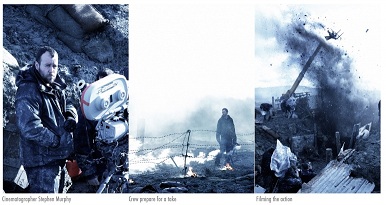 If you would like to know more about the making of this film you can view the behind the scenes video here::

About “Coward” from Stephen Murphy on Vimeo.

I'm a 35 year old, self-confessed media junkie from London. I currently work as a tester in digital media (some say I get paid to watch telly) and also worked as a games tester in the past. I also spend a lot of my spare time watching films and playing video games. Thankfully I have a very understanding wife, who allows me time to do so.
You might also like
breakingindependent filmshort film