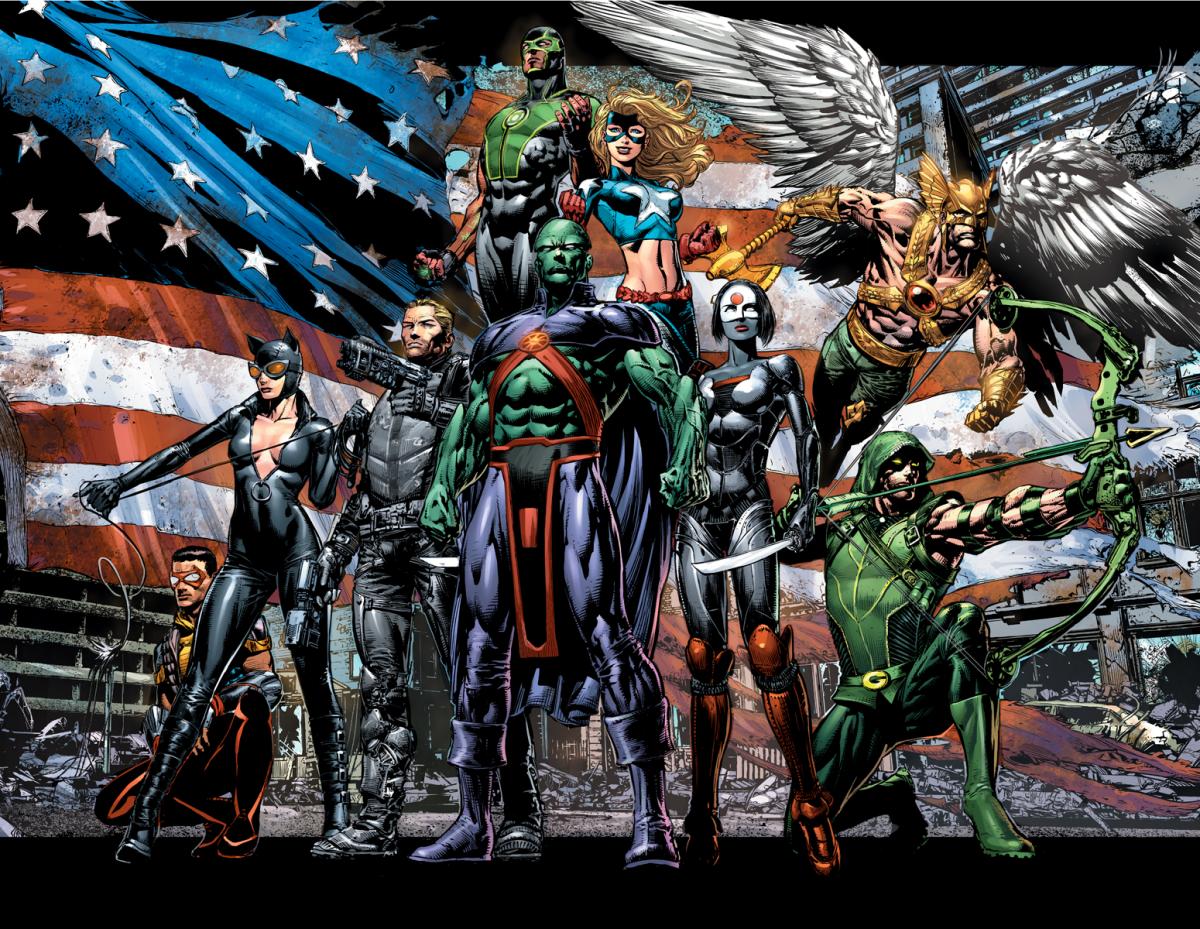 So DC has cancelled a few series, and launched an equal number of new series in their fourth (I think, could be fifth, I lose track) wave of the New 52. The cancelled titles are The Fury of Firestorm: The Nuclear Men, Sword of Sorcery, The Ravagers, Team 7, Deathstroke, I Vampire, DC Universe Presents and The Savage Hawkman, and -unlike previous cancellation waves- I actually found myself breathing a sigh of relief at this one. I mean, sure, I love Sword of Sorcery with every sequin in my soul, and I Vampire and Firestorm were decent enough reads; but Ravagers wasn’t as good as the rest of the Young Justice titles, DC Universe Presents could easily be replaced by a bunch of miniseries, Deathstroke and Hawkman were tainted by the creepy-uncle touch of Liefeld, and as far as Team 7 is concerned, it should be scoured from continuity for what it did to Black Canary.

Needless to say, they won’t be missed. But what about the replacement titles- are they any better?

Thankfully yes, yes they are. So much better. Let’s take a look-see… 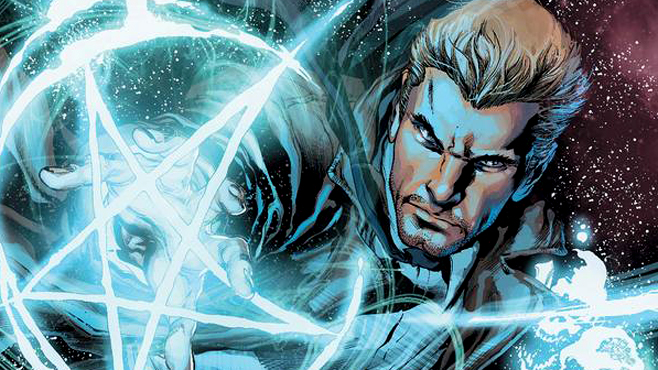 Constantine has left London and moved to America, in what is considered even within DC itself to be the greatest act of sacrilege ever committed. I have heard all the usual complaints, but honestly, I think it’s far too soon to condemn it. There’s no sign of the feared dumbing-down or cleaning-up of Constantine’s typical brutal occultism, and so long as it stays that way I can live with it. If I lose the feeling that Constantine is the only thing standing between me and soul-nomming demons, I’ll consider this a failure. Until then, I’m prepared to give it a chance. 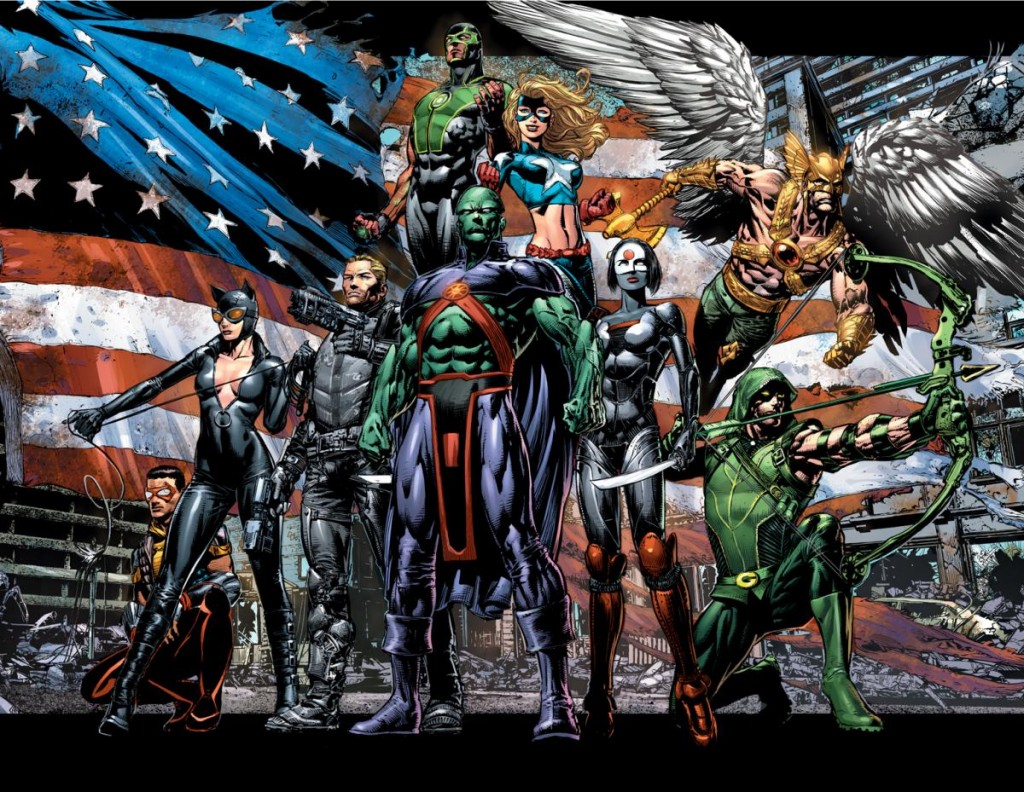 On paper it’s a great idea- six people, all picked for their ability to effectively counter each member of the Justice League, in the employ of the US government. Except for, you know, 90% of their whole plan. I’ll buy Martian Manhunter as a foil for Superman. I’ll even concede that Simon Baz is a reasonable choice to go up against Hal Jordan, despite Jordan having far more experience than Baz, as well as a more reasonable outlook and approach to problem-solving. But Catwoman as a “solution” to Batman? Look, it’s made abundantly clear in Catwoman’s solo book that she and Bats don’t have any sort of intellectual connection- oh sure, she can tell something’s got him down right after Robin bites the dust, but she doesn’t know specifically what. Her skills are not even close to Batman’s, and he hasn’t shared any intimate details of his life with her- at least none she can use against him- so basically they hired Catwoman in the hopes that the man with the mental fortitude to go up against superpowered threats with a toolbelt would somehow be unable to resist the allure of good pussy.

And yet, in spite of the dubious qualifications of some of its members, I actually enjoyed JLA. It doesn’t have the star power of Justice League, but it does a better job with the characters than their most of their solo comics do- especially Hawkman. 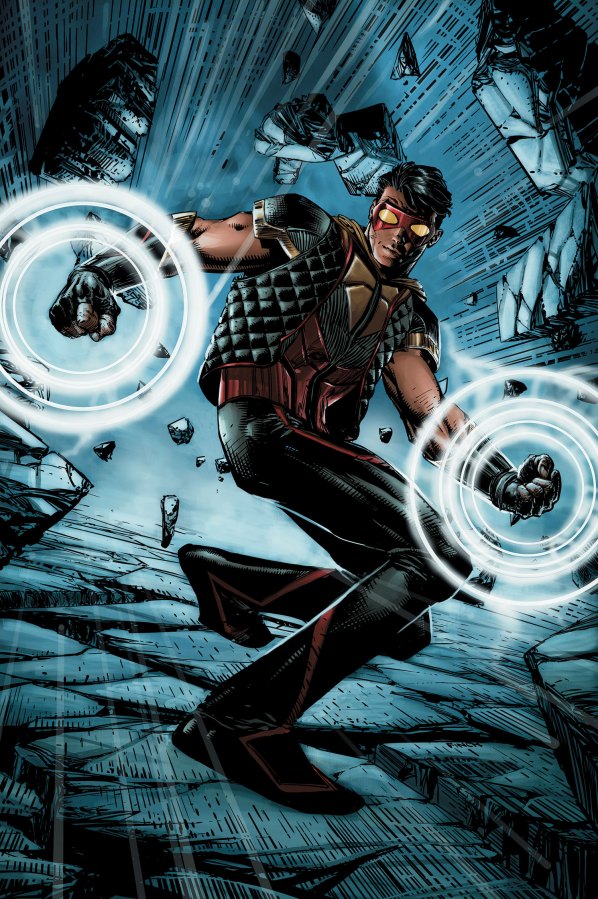 Vibe, like Marvel’s Luke Cage, started out as a ham-fisted attempt to inject ethnic diversity into comics, whilst unintentionally (we hope) perpetuating racist stereotypes. As society grew more and more progressive, Vibe (unlike Marvel’s Luke Cage) was pushed to the sidelines out of embarrassment, with occasional efforts made to atone for his offensive behaviour in the 1980s. So it’s quite a surprise to see him given a solid backstory, decent powers and -gasp!- the personality of a real human being in his very own series.

The writing’s good enough that I went from “Who the hell is this guy?” to putting him in my Top 10 favourite superheroes over the course of the first issue; and the introduction of Gypsy (from pre-reboot Birds of Prey and JSA) just made me warm to it even more.

But, I wouldn’t be me if I didn’t take a good thing and poke holes in it with a muddy stick, so I have to mention the absurdly convoluted title. Justice League of America’s Vibe? Were we going to confuse him with a different Vibe? I mean, Green Lantern doesn’t need an explanation in the title and there are literally thousands of them. Or was it just a subtle way of selling twice the comics: “Liked Vibe? He’s also in JLA! Buy that too!” It’s just weird. They didn’t call Katana “Formerly Birds of Prey’s, now Justice League of America’s Katana”, or Constantine “Justice League Dark’s Constantine, as ripped cruelly from Hellblazer”. 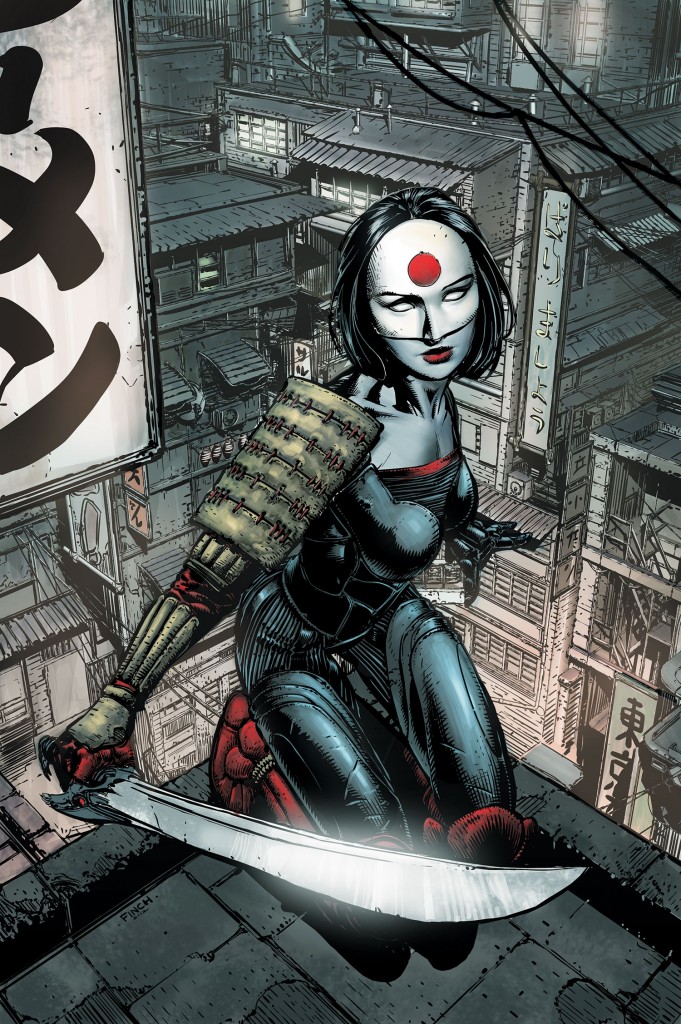 Ah, Katana. I didn’t really warm to her in Birds of Prey, mostly because she just sort of lurks around the edges of the group while they all whisper to each other about how crazy she is, so hearing she was getting her own solo series puzzled me. What was there to write about? You may as well write an ongoing about a batarang- wait, that would be awesome, someone should totally write that. My point stands, though: she seemed like an extra pair of hands and a sword, and not a whole lot more. Boy, did this prove me wrong.

In a mere two issues, Katana shows herself to be both incredibly skilled and deeply flawed. She is a delicate contradiction: subjecting herself to an unachievable standard of perfection, whilst at the same time underestimating those she deems less skilled than herself; declaring herself a “clan of one”, yet serving on not just one superhero team, but two. All in all, I think Katana is the shining star of this wave- a strong female character in a richly-populated setting, with equal parts fighting and reflection.  If Katana were a movie, Tarantino would direct. 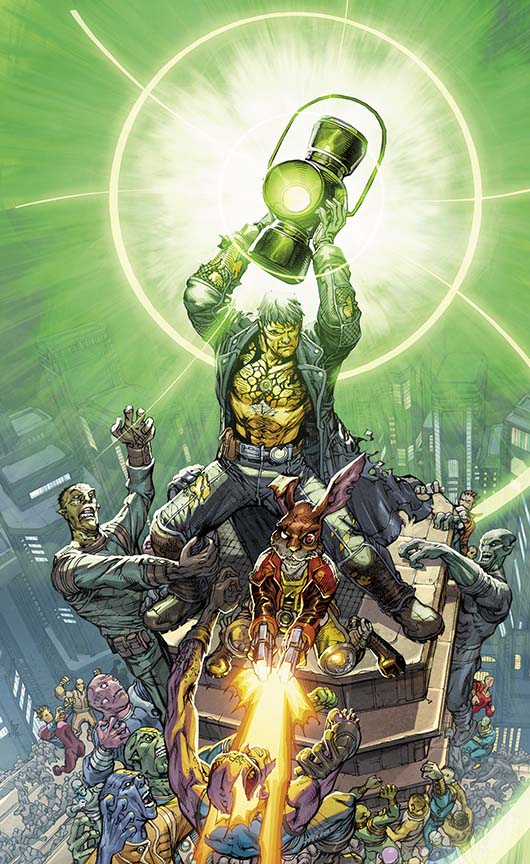 Following Star Sapphire’s narrow escape from Lady Styx’s bounty-hunting reality TV show in the Green Lantern: New Guardians annual, the rogue Green Lantern Jediah Caul is the show’s latest “star”… which means running, hiding and fighting for his life in the wretched hive of scum and villainy that is the eponymous Threshold. The rules of the game are simple and genius- a criminal (or just someone that Lady Styx isn’t too fond of) is released into the general populace, and after one day’s head start, anyone can kill them and claim the bounty. The civilians alternate between cheering on their favourite bounty hunting teams, and fantasising that maybe they’ll be the ones to do the deed.

In spite of this, Threshold resists the urge to make a trite statement about reality TV and our media-dependent society; the subtext is there, but subtext is all it is- the main focus of the story so far is on trusting and helping each other in a world where everyone really is out to get you. The characters are colourful, both in personality and in appearance, and you can’t help but get swept up in the excitement of the games. Go plucky rebels go!

The Green Team / The Movement

For those of you doing the counting and realising that DC will be a few comics short of a full 52-card deck, never fear: two more titles have been announced, though not released until May (which still leaves it one short, at least until we get more info about the alleged upcoming Superman comic)
Honestly, words can’t do justice to the incredible concepts behind these two interlinked titles, so I’m just going to give you the cover art and the blurbs, and let you squee for yourself. 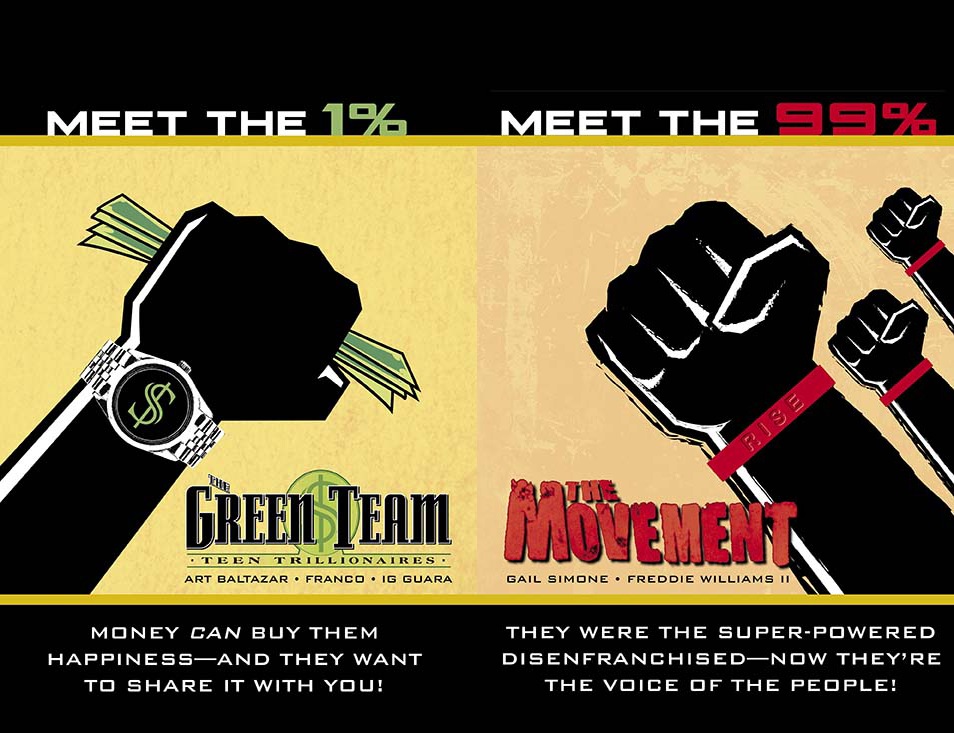 We are faceless. We are limitless. We see all. And we do not forgive.
Who defends the powerless against the GREEDY and the CORRUPT? Who protects the homeless and poverty-stricken from those who would PREY upon them in the DARK OF NIGHT?
When those who are sworn to protect us abuse their power, when toxic government calls down super-human lackeys to force order upon the populace…finally, there is a force, a citizen’s army, to push order BACK. Let those who abuse the system know this as well: We have our OWN super humans now. They are not afraid of your badges or Leagues. And they will not be SILENCED.
We are your neighbors. We are your co-workers. And we are your children

INVENTORS! EXPLORERS! ADVENTURERS! Do you need money to finance an important project? Then you should set up a meeting with THE GREEN TEAM!
• Nature of world-changing idea:
• Amount requested:
• Does your project have the potential to:
Fracture space-time?
Replace the combustion engine?
Attract extraterrestrial attention?
Prove/disprove existence of deities?
Piss off The Justice League?
Render the human body obsolete?
If any of the above are checked, please fill out liability release form GT2013-05. Send any 82 drawings, plans, models, or photos with request.

Politics has never been so epic.