previous
Ridley Scott's Halo movie being shot in Belfast N.Ireland
random
next
A Million Ways To Die In The West
Film and TV
0 likes

There were some beautiful aerial shots, which is always nice. When that's the only positive, well....

Overly long, it suffers from a broken narrative, there is no way for viewers to truly sympathise with the characters, not even when high on shock value events happen.

Wait for the Blu-ray/DVD.

I don’t know about you, but I was actually excited about this movie. I had high hopes, fuelled by people claiming that it’s the best movie ever (though I’m guessing they merely meant it’s the best Godzilla movie ever? Which in fact isn’t that hard of a feat to achieve), but all my hopes were dashed some ten minutes in when the narrative of the story seemed to implode. My best guess is that they actually had several people write the script, but none of them were given the rest of the puzzle, only vague outlines of what everyone else was doing. Or maybe the editor just decided to throw together some jumbled images, add some music and call it a day?

Let’s see if I can illustrate my point about why Godzilla isn’t a good movie, before all of you devoted fans jump down my throat, trying to make me understand your own point of view. I’m looking at you, Mike. 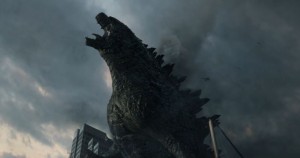 With a movie named Godzilla, presumably the hero of the story is the eponymous creature. It takes about an hour for it to ever show more than a little tail. Such teases. But let’s not hold that against them, since for the rest of the story we’re regaled with Godzilla smashing buildings, Godzilla running into boats, Godzilla trying to kill two fellow prehistoric monsters(I think they really should’ve named the movie after them), Godzilla stepping on people on accident. Wait, was there anything else going on in this story? I do seem to remember some incredibly bland characters who were running around, doing their best to look interesting/pained/angst ridden, with varying degrees of failing at it.

Let me introduce you to said bland characters: A soldier – Ford Brody (Aaron Taylor-Johnson) that has a very cliched relationship with his estranged father – Joe (Bryan Cranston), but somehow agrees to go on a wild goose chase with him, a researcher Ishiro Serizawa (Ken Watanabe) that somehow ends up being looked at as perfectly okay, despite having been responsible for failing to contain a dangerous creature (somehow he’s relevant to the plot, even though all he does is running around doing pretty much nothing. Well, he does provide us with the most quotable lines); a nurse Elle Brody (Elizabeth Olsen) that’s fighting to save her son; and the military (we’ll look at them in bulk, since the movie does pretty much the same thing) who, as usual, is portrayed as making all the wrong calls for all the wrong reasons. We’re supposed to care about them all, but they make it incredibly hard. Incredibly hard.

Brody’s quest for his family, his wife’s horror at having to hand her child over to strangers in order to save him, her further horrifying realization that it might have been a mistake, everything was set up perfectly to make us understand the emotional stakes of what the human characters were facing. But the delivery of said emotions were Kristen Steward level of blankness. I couldn’t care less about them, given that we’ve gotten to see more of the MUTO romance than their own. I couldn’t care less, because soon to be victim number three from the right conveyed more emotions than the presumed “human” leads. Hell, even mamma-MUTO was better at conveying her grief than Elle Brody ever was. 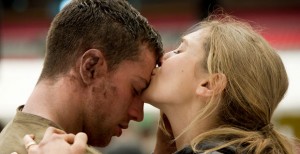 There were no stakes in this movie. Emotional or otherwise. It was like doing a painting by numbers. All they had to remember was to hit their marks and that was it. There was nothing else to it. Still, somehow they managed to miss them, leaving everyone slightly disappointed. Once a character is no longer alive or is no longer in front of the camera, it’s quickly forgotten, never to be mentioned again. Remember that kid Akio? All those soldiers that fell to their deaths? No? Well, I don’t blame you. I feel like maybe the movie was missing some five minutes at the end, giving some closure to this mess, but it’s too late to add them now, isn’t it? Well, at least the Brody family is happy and reunited, screw everyone else, right? Just because.

While an argument could be made about the quality of the film, focusing only on the fighting between Godzilla and the MUTOs, if that’s the only thing that stood out from the movie for you, well…then the movie has a problem. It could’ve all been condensed to some twenty minutes of non-stop smashing and I think it might have left us (by us I mean me) more satisfied.

The absurdity of it all was staggering. Let’s leave aside the fact that apparently the MUTO feeds on radiation alone and that apparently Godzilla too can snack on nuclear missiles, and focus on other things that border on the absurd. If you are aware, as a military commander that the crazy, flying monster can create EMPs that knock out every electronic device, why would you send in planes to fight it off? After the first dozen or so fell out of the sky, why would sending in more seem like a good idea? Let’s pretend that we didn’t see them try to fight of monsters that were the size of buildings with machine guns. They were undeterred by nuclear bombs. They were literally eating them for lunch. Anyway…

…if we’re on the absurd, why must we have token female characters following around the “smart, rugged” male characters, just to sing their praises or to confirm how smart the men are? Before anyone jumps on the well, there’s another feminist bandwagon, can we stop and think for a minute about Serizawa’s assistant who literally did nothing more than follow him around like a loyal puppy?

If you remove Sally Hawkings’ character from the story, things remain the same.  Juliette Binoche was practically Mary Winchester in this movie, existing just so she could be set on fire to give our male protagonist a reason to poke the bear and see with his own eyes, before death claims him, what killed his wife. Which is irrelevant as well, given that the MUTO would’ve woken up and Godzilla would’ve still come after it, even if we didn’t have to spend some one hour of the plot learning about the characters. Things would’ve still played out the same. Hell, even if Brody’s quest to go find his family was removed from the story things would’ve most likely played out in the same way. Godzilla would’ve just made gooey eyes at some other random human, trying to convey what I believe is the (very) vague plot: Godzilla is a nice monster, that we tried to kill, cause humans are bastards, and it saved us all from worse monsters. There’s a lesson about using nuclear weapons squeezed in there somewhere, but most people in the theatre missed it. I actually asked around.

This movie left a bitter taste in my mouth as I counted both the time I wasted in the movie theatre and the money that the grubby handed cinema took from me for the displeasure of this viewing, but feel free to subject yourself to it. We all know that opinions and tastes are always on the subjective side, so maybe you’ll find it to be a staggering masterpiece of missed opportunities and randomly used plot devices that rival Tolkien’s Eagles (I’m looking at you random Godzilla spat beam only used at the end of the movie).

What's there to say about me? I love the sci-fi and fantasy genre when I read, but I am in no way limited to that alone. I do think Frank Herbert deserves a statue for his writing(if there is one, point me in that direction, please). I enjoy writing quite a lot, but I am also kinda lazy. If you want to make me happy give me books or Doctor Who collectibles. Or a real TARDIS, in which case I will love you forever.
More Goodness
aaron taylor johnsonBryan Cranstongodzilla