Take a seat and grab some mead my fellow Nords; it’s time again to delve into the bewildering mire wonderful world of Skyrim modding. In Part 2 we’ll take you through the best and most indispensable mods out there at the moment.  This selection is aimed towards your average mid-range gaming PC, so while all these mods are worth a try, be warned that depending on your hardware some of these could be rather demanding when trying to run multiple ones at once. It also assumes you already know the basics of using mods with Skyrim, so if you don’t then take a look at our first guide here before reading on (or don’t. You little rebel, you). 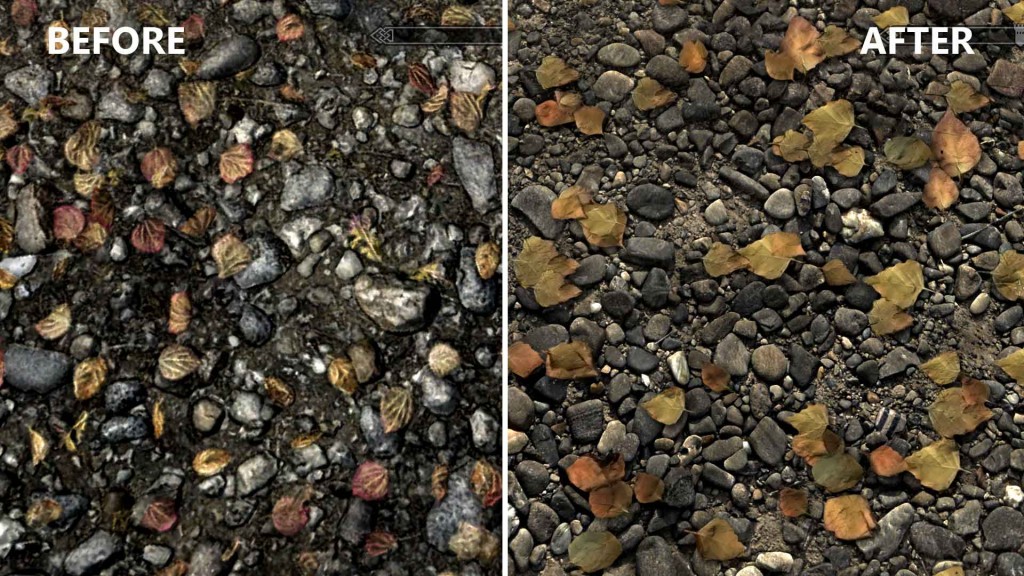 How did we ever cope before HD pebbles?

Kicking things off with a bang is Skyrim HD; an outrageously popular series of High Quality texture packs that improve the look of practically everything in the game. There are 4 different packs available; covering villages, the outdoors, dungeons and “miscellaneous”, and each pack retextures almost everything in the game. Thatched roofs are more detailed, wood is grainier and terrain textures are so detailed you can actually make out every blade of grass or twig on the ground. It really is quite something. 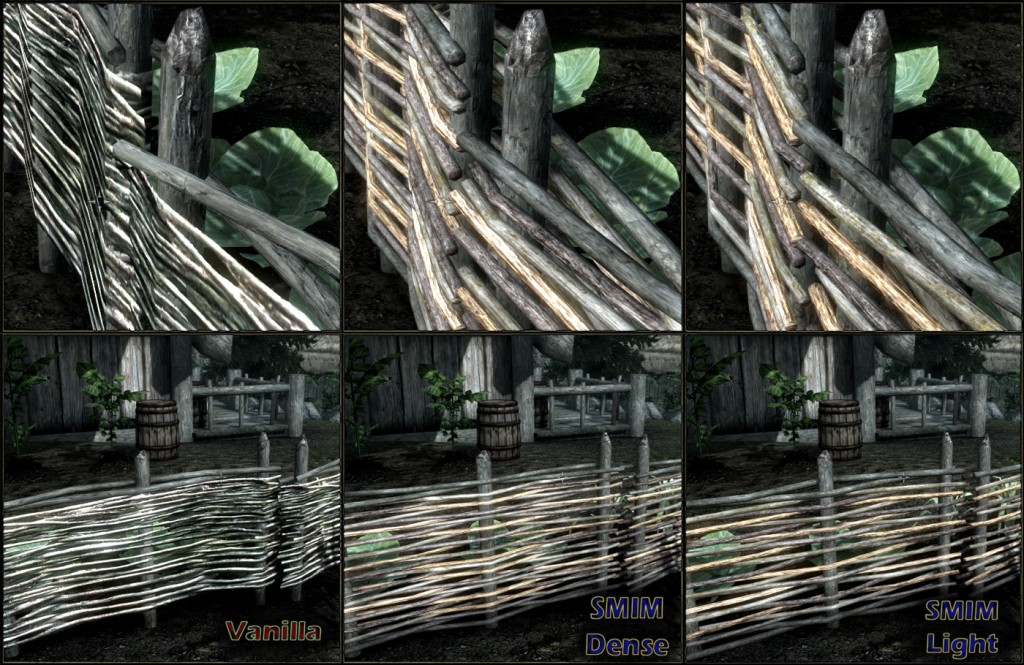 I bet you’ve never been so impressed by a fence before.

Another great graphics mod that does wonders to Skyrim’s visuals; the SIMM only affects certain items in the game but it will make an immediate difference once you start using it. What this mod does is improve all the “static meshes” in the game; i.e. things that should be 3d, but the developers  basically had to cut corners with, so end up looking blocky, angular, low quality and two dimensional. Things like wall decorations in houses, or rope tied around a fence. The SIMM smooths these meshes out, adds much more detail and makes them more three dimensional.  Right down to the very last potato.

The WATER mod does exactly as it says on the tin; it improves the look of Skyrim’s rivers, lakes, waterfalls and oceans. It adds a more transparent feel to the water, makes them look much more lifelike and dynamic, and can even improve things like ice and splash effects, too. Fast flowing rivers and waterfalls will foam and churn, while calmer waters will ripple gently, reflecting the sun. It’s another great little mod that makes a remarkable change to Skyrim’s default waterways, which many people have mentioned look almost as bad as Morrowind. 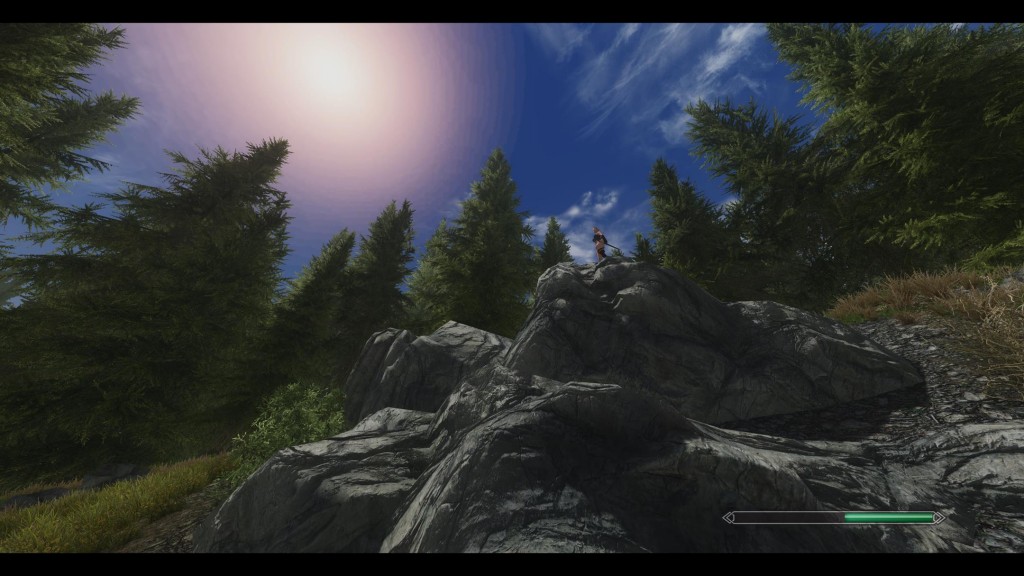 What a beautiful day. Let’s go murder some bandits and steal their clothes!

I know this one’s a twofer but it’s worth it, as these two mods compliment each other perfectly. Whereas the other mods here improve the game’s textures, these two improve the game’s lighting and ambient effects, among many other things. Realistic weather effects, darker nights and warm or cold interiors are all part of the bargain with Climates, and Realistic Lighting in particular comes into its own indoors, when you can see rays of light and dust particles streaming in tavern windows, or leaking through a hole in a cave roof. Use alongside Skyrim HD and W.A.T.E.R. to see the land of Skyrim at its very best.

You’ve covered land, you’ve covered water and you’ve covered sky. So together, these mods tackle all those weapons, armour sets and unique items that are left over. aMidianBorn’s armour mod gives steel armour decorative swirls, makes elven armour look less like it’s made out of a Ferrero Rocher wrapper and gives leather and iron a realistically worn look, whereas The Weapon Retexture Project takes every single weapon from arrows to axes and gives them a complete overhaul, turning straightforward and plainly decorated items into elaborate, beautifully crafted works of art. 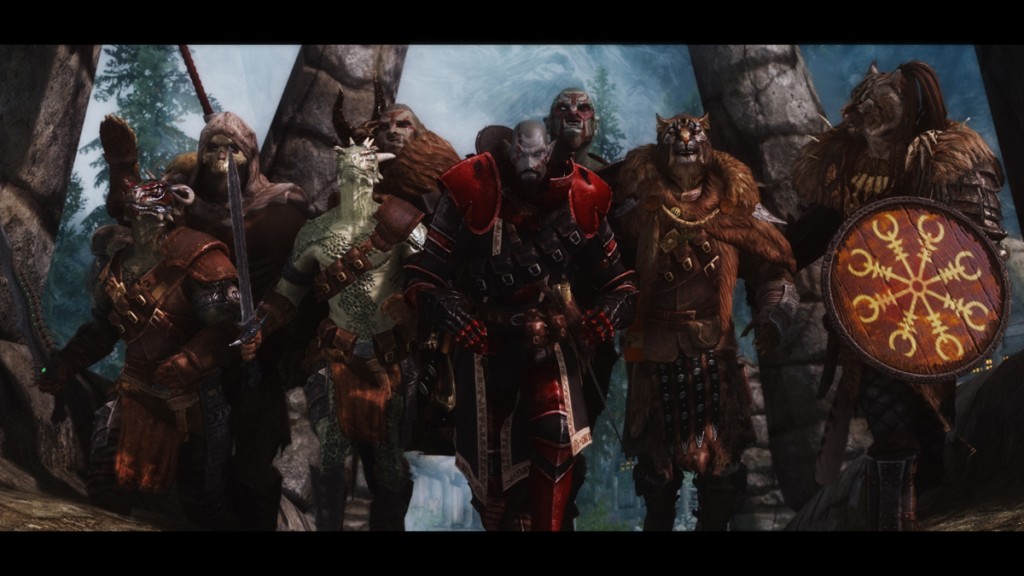 It’s like the medieval Avengers. If the avengers were made up of lizards, orcs and cats.

This downright amazing mod manages to include a huge selection of brand new high quality armour sets and weapons. From mercenaries to warchiefs, samurais to knights, there’s a huge variety of light and heavy items to forge. And as for weapons, there’s more inventiveness than Dexter’s Laboratory. There’s spears, hatchets, staves, assassin’s blades, war picks and dozens of flavours of swords from rapiers to scimitars and so much more. A huge amount of effort must’ve gone into designing and bringing to life all these items, but the best thing is that NPC’s can be seen wearing it all too, making the world feel much more varied and alive. 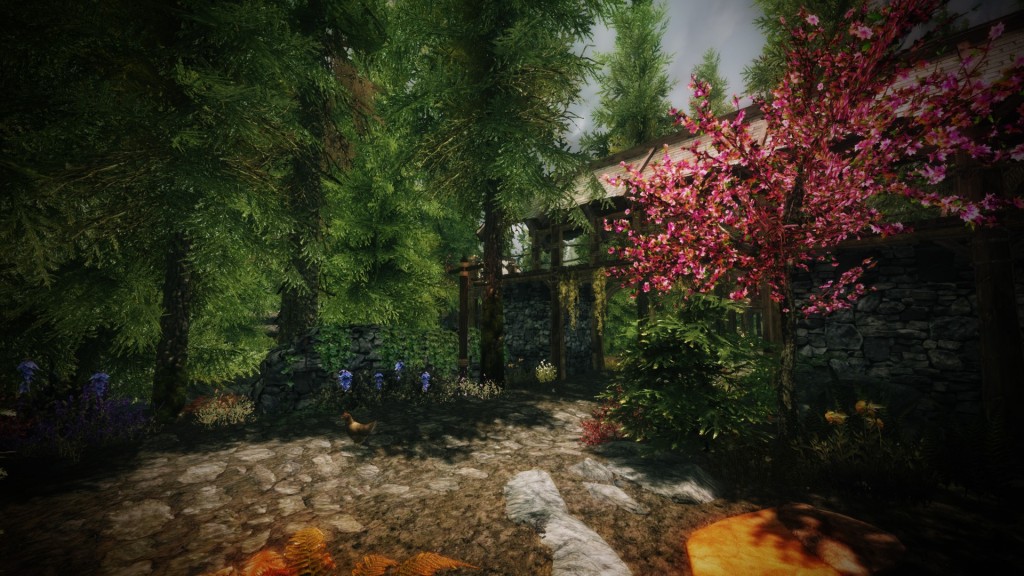 Would you just look at that beauty. LOOK AT THE BEAUTY.

It’s quite hard to play down just how much this series of mods completely changes the towns and cities of Skyrim. All I need to say is that once installed, this mod floods every town with life with plants and trees and even new buildings, items, and more. But I really can’t do it justice with words alone; you really do need to see the difference to believe it.

To go along with the above; Lanterns of Skyrim is a wonderfully simple mod that adds a bunch of – you guessed it – lanterns all throughout the world. When night time falls, these lanterns all light up and flood towns, cities and roads with a strangely comforting and warm glow, truly bringing towns to life, and lighting your way while travelling through those dark nights on the road.

The Sounds of Skyrim is a series of ambient mods that, as you might’ve guessed, add new sounds to the game. There are 3 different packs you can install, “The Wilds”, “Civilisation” and “Dungeons”, and they all add literally hundreds of immersive sounds to the game, from the distant hammering of an anvil and the background chatter in an Inn, to ghostly howls in tombs and the simple buzzing of a bee in the wilds. I’d definitely endorse this one, as it’s surprising how much of an effect it can have on the immersion in the game.

If I had to pick just one thing to add to the game, it would have to be Interesting NPC’s. This one mod will add quite literally hundreds of new characters all over the world of Skyrim; fleshing out inns and cities, bringing life to the wilds, and more. But the truly amazing thing is that all these characters are voiced by professional voice actors, who do an astoundingly accurate job. Each one has their own backstory; some can be taken as followers, others have their own questlines and others still simply want to chat over a bottle of mead at the inn and tell you all about their life, their loves, and their losses. It’s difficult to overexaggerate just how immersive this mod is, and how much value it adds to the game. 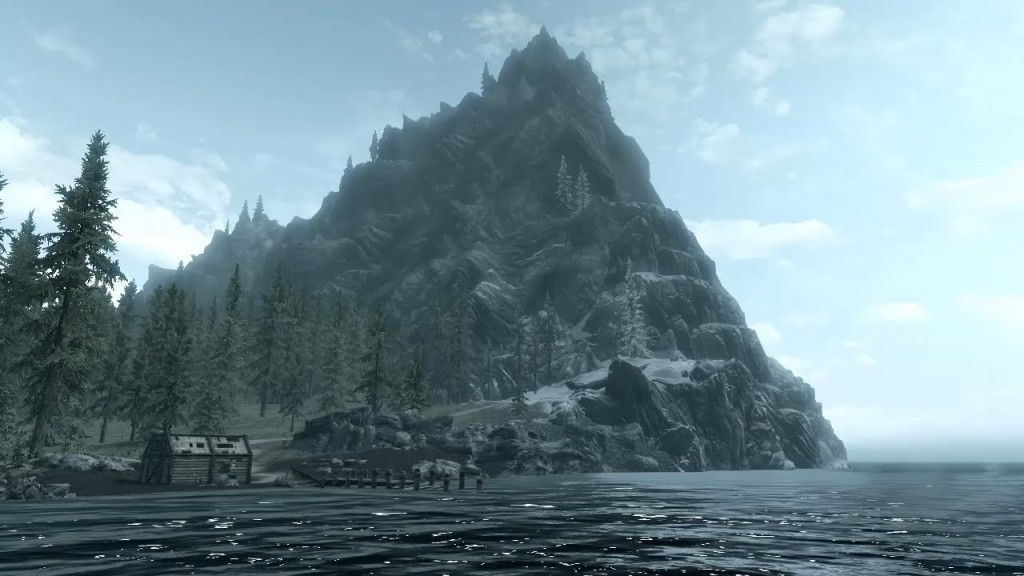 There are many excellent mods out there that add whole new quests to Skyrim. Some even add new areas to explore, but Falskaar takes this to a whole new level. A combined total of 2000 hour’s worth of work from one 19 year old has resulted in an entire new land brimming with over 20+ hour’s worth of quests, areas, monsters and fully voiced characters. It’s a massive achievement, but even more impressive is the the level of quality. So professional is this mod that most agree it’s the equivalent to an official DLC in terms of both content and size, and although it’s only been out a few weeks, it’s gained an overwhelmingly positive community response.

A new start is both fun and useful, especially if you’re like me and are always starting new characters. Rather than the default opening, this mod makes your character awaken in a small prison cell with a mysterious statue, which you can use to choose a number of new starts in Skyrim. A bandit in a hideout, a necromancer in a cave, a soldier in the army or a simple patron of a local tavern, there are many different possibilities. The interesting thing about this mod is that it not only changes your location (and there are a number of different ones for each new start), but it also changes your starting equipment and backstory as well, so it’s very fleshed out for those of you who like your immersion. If you like a challenge try the “left for dead” option, which starts you in the middle of nowhere, with nothing except the clothes on your back.

SkyUI is a truly beautiful piece of kit which every self-respecting Skyrim player should have. It replaces Skyrim’s notoriously cumbersome menus with a much more streamlined version, compatible with gamepads or mouse and keyboard. Lists are longer and more visible, sorting is made easier and object info is easier to see and compare. It’s probably the most fundamental mod for any Skyrim player, which is why it’s over twice as popular as the second most downloaded mod on the Skyrim Nexus. It even has an added bonus, too. It introduces an extra menu in the in-game options for managing your installed mods, so you can adjust your mods without having to constantly exit the game.   One important thing to note with SkyUI is that it requires another mod to work. You must install the Skyrim Script Extender and run the game from that rather than from the launcher or from Steam. However, full instructions on how to do this are on both the SkyUI and the Script Extender’s mod pages.

You might’ve guessed by now that compatibility is a huge issue when it comes to modding, so if you’re going to be doing any amount of modding whatsoever, you’re going to need these patches. There’s one for Skyrim and 3 more for the DLC packs, and they help by fixing some common issues that the official patches don’t cover, as well as helping the game run better when it’s modded, too. Pretty much essential.

I’ll go into detail on how to use these handy little mods in a later guide, but in a nutshell, together these two can make your game infinitely more stable by identifying issues with your setup. Incorrect load orders, incompatible files, corrupt files, they can identify 90% of the things that either slow your game down or crash it entirely, and help you to fix them without removing the mods entirely.

The Simple Borderless Window is, as its name suggests, a mod which allows you to play Skyrim in windowed mode without the large, distracting border around the edges. This is useful specifically if your FPS is taking a hit from all those texture packs, as playing in windowed mode can help with performance.

Hopefully this guide’s given you some inspiration on how to improve your own game. Of course there are many, many more out there than those listed here, these are just some personal and community favourites. But as a starter guide, this list will give you all you need to make some serious improvements to your game. Keep an eye out for our next guide where we’ll talk about the more advanced aspect of Skyrim modding; the wonderful world of ENB’s.