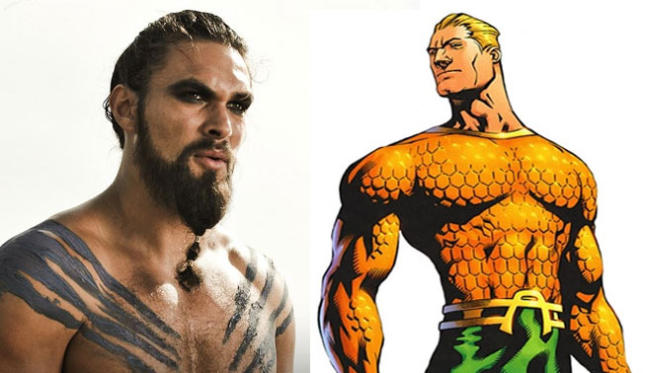 Over the last couple of days the internet has been flooded with rumours that DC Comics/Warner Bros. are about to confirm Jason Momoa is to play Aquaman on Batman V. Superman: Dawn of Justice and in the following Justice League film. The source of the latest round of rumours is HitFix, who have gone on to say it is a definite casting, and that Zack Snyder has finished the character design so filming can begin soon.

The is not a new theory, the idea came to light six months ago but despite the internet being awash with the news Momoa adamantly denied it many a time, at one point stating: “I know, Aquaman! I couldn’t even be more random for Aquaman, you know, with the blonde hair…I don’t even know where that comes from. It’s like me being, uh, Robin or something. Who pulls that out? I see that on the Internet and I’m like, Aquaman? A guy like…Lobo, I could see.” This is not surprising, since we live in a world of social media, secrets are difficult to keep and the suits don’t want information out in the public until the deal is done.

34 year old Momoa is best known for his role as Khal Drogo on the hit series Game of Thrones and Ronan Dex in Stargate: Atlantis, but that is not to say he doesn’t have any experience in the water, yep Momoa played a part in Baywatch. Many are criticising the choice as, traditionally, Aquaman aka Arthur Curry is a blonde and, unsurprisingly given the era in which he was created, white. Whether or not he looks the part is not the question, does Momoa have the acting chops to pull of the regal fish master?

Though his role in Batman v. Superman is said to be a small one, HitFix are alluding to the fact that the king of Atlantis is not best pleased with the damage done to the Indian Ocean by the World Engine, hinting that the film will be exploring the consequences of the destruction that took place during Man of Steel – which is welcome since it has been the butt of many a meme.

We won’t know anymore information until DC Comics/Warner Bros. pull their finger out and launch an official announcement, when they do we shall endeavour to immerse you in all the information.