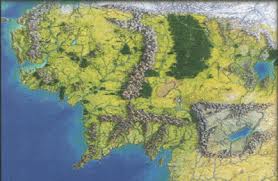 As many of you are aware I love Lord of the Rings, I love it so much I would bed it, have little LOTR babies and live happily ever after in a hollowed out hole in the ground until the day I was summoned across the water to Valinor.

It therefore excited me greatly ( maybe a little too much) to find out that a Modding group (MERP) were making a huge LOT
Rs Mod for Skyrim…This could be better than Skyrim itself, this could be the game that I have been waiting for; the game that will fill the void until the Hobbit movie comes out at christmas!
Alas it was not to be, after a trawl of all my favourite sites last night looking for interesting goings on, I stumble across this article on PC Gamer… Looks like Warner Bros. have sent the Modding Group, MERP, a cease and desist order and despite a valiant negotiation attempt on behalf of MERP, WB’s soliciotor was having none of it, and any chance of a LOTRs Mod for Skyrim has been dashed to pieces.
I can only guess with the hobbit being released very shortly, that anything to do with the LOTR world is very weak ground to be treading on.
Article taken from PC Gamer

Last week, Warner Bros. sent a cease-and-desist letter to the development team of the Middle-Earth Roleplaying Project (MERP), a detailed Skyrim mega-mod portraying the Lord of the Rings experience with quests, iconic characters, locations, and visuals lifted from the books and films. Ambition, like a tenacious hobbit, won’t diminish easily, as MERP’s team set up a petition earlier this week asking fans and followers to convince Warner Bros. to rescind the order.

“As of 2012, the team ported the mod to the newest Elder Scrolls game from its predecessor, Oblivion,” the petition reads. “Since the move, the team has built up a huge following due to its quality and drive. This rise in popularity has also drawn the eyes of Warner Bros., currently the rights-holder to The Lord of the Rings in gaming, who then issued the MERP team a cease-and-desist letter. We now need you, our fans and other gamers, to help make Warner regret sending that letter by showing them just how many people are behind this mod.” A Facebook page for the petition also exists.

The conflict began when modder Marfaer revealed WB’s actions in a forum post, writing, “MERP has received a Cease & Desist letter from Warner Bros because the project uses copyrighted content to which Warner Bros has an exclusive license (names and events). The team has decided to stop development of the mod.”

Speaking to PC Gamer, Maegfaer summarized his communication with WB’s lawyer: “WB first said they wanted to see if we could come to some sort of understanding, but when we offered to remove the Ringbearer mainquest (they mentioned specifically that it was a problem) they refused and immediately wanted us to cease & desist without any further negotiations. We then offered to become a private project, with us only releasing screenshots/movies of MERP to be able to recruit modders, and they still refused. The negotiations felt like a farce, because they refuse anything unless practically all LotR content is removed.”

When we reached out for comment, Warner Bros. VP of Public Relations Remi Skar said simply, “While we appreciate our fans’ enthusiasm, we also need to protect our IP rights.”

Maegfaer also provided excerpts of “the most interesting parts” of the team’s back-and-forth with WB, which are copied below:

Warner Bros. lawyer: As you may be aware, Warner Bros. has developed and is developing, either by itself or through a licensed third party, games based on the LOTR and Hobbit properties. From the description of MERP available publicly, we understand that it essentially amounts to a LOTR game, which contains numerous similar elements to legitimately licensed LOTR/Hobbit games. The release of MERP into the marketplace will likely result in customer confusion and cannibalization with respect to such legitimately licensed LOTR/Hobbit games and will detract from the value proposition bargained and paid for by legitimate licensees of the LOTR/Hobbit properties. Furthermore, projects and games like MERP will diminish and erode Warner Bros.’ ability to manage and protect the brand, reputation and quality of the LOTR/Hobbit properties that it has invested significant resources to cultivate over the years.

We would like to explore with you ways to modify MERP to address our concerns from the intellectual property rights-holder’s perspective while, to the extent possible, allowing you to achieve at least some of what you wanted to accomplish with MERP. If you are interested in exploring that kind of an approach, please give me your contact details so we can arrange a time to talk. Among other things, we would like to see a description of the mod, settings, characters, etc. and understand how far along in development the mod is, when you were hoping to launch the mod, and who the key team members are that we should be talking to about altering the mod to remove the Hobbit/LOTR content.

MERP: It’s understandable that a Ringbearer questline is problematic to Warner Bros, since it would re-tell the story of a large part of the books. Although it hurts, the team could probably agree to scratch the Ringbearer questline and not make any of the main characters (such as Frodo, Gandalf, Aragorn, Théoden, etc.) from the book available for playing, nor let the player follow major parts of main character’s stories told in the book.

That way the player would only have occasional contact with main characters, who would usually merely function as quest givers to send the player on their own path. Usage of copyrighted contents from the books would then be minimal.

Warner Bros. lawyer: Thank you for your email. Unfortunately the removal of book content from MERP as outlined in your email does not sufficiently address our concerns, as MERP would still contain many infringing elements. Based on the information that you provided and in light of the current stage of development, we ask that all development efforts in connection with MERP be terminated at this time. This includes, among other things, cessation of the use of the name “Middle-earth”, which is the subject of a trademark registration owned by The Saul Zaentz Company d/b/a Middle-earth Enterprises. Please respond at your earliest convenience to confirm that you will comply with the foregoing demand.

MERP: Development of MERP has been halted, as per your request.

We have another proposal though. We could turn our mod into a private project, meaning that we wouldn’t have any public releases of the mod’s game content. The mod would only be distributed among the developers of the mod, which would take away MERP from the marketplace and thus avoid any customer confusion and not harm Warner Bros’ ability to manage and protect the reputation of the LOTR properties.

If Warner Bros will allow us to pick up and resume development of our mod, we will rename the project to get rid of the usage of the Middle-Earth trademark, and to the public we will merely mention that we have become a private project to prevent legal issues. Public presentation of the team’s efforts (through pictures and the occasional video) will be limited, merely serving the goal of recruiting other talented modders to preserve the vitality of the mod’s development team.

We think that this solution would take away any conflict of interest between Warner Bros and us modders, leaving both parties satisfied and unharmed.

Warner Bros. lawyer: Thank you for confirming that you have complied with our request to cease development. We have considered your proposal to turn the mod into a private project, and while we appreciate and commend you for your creativity and willingness to address our concerns, we cannot authorize the MERP team’s use of the LOTR/Hobbit properties in the mod, whether as a private project or otherwise. Accordingly, we cannot agree to your request to resume development.

From N.Ireland but now living in Manchester, England; Matt is the founder and CEO of Geek Pride. Interests: Photography, Music, Art, poetry, Military History, Model making and painting and of course gaming (table top and computer)
You might also like
breakingcease and desistlord of the rings