previous
Kickstart This! Sci-Fi Graphic Novel "Forgotten Planet"
random
next
Proof that The Walking Dead and Toy Story have the same plot! 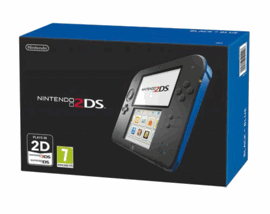 Nintendo have officially unveiled their latest handheld system today and chances are that it isn’t what anybody would have expected.  Due to launch in the UK at £109.99 on Saturday 12th October, the 2DS is a dual-screen tablet device aimed at a younger market. The console is also scheduled for a simultaneous 12th October release in North America at the price of $129 but is still unconfirmed for Asia or Japan. The console will be bundled with a 4GB memory card and will be available in either red or blue.

The 2DS will play all existing DS and 3DS titles but will not support 3D graphics. As Nintendo have only ever advised the 3D functionality of the 3DS as being useful for kids over 7 years, removing the 3D screens at a reduced price point makes sense as does the tablet form factor.

Nintendo have also never enforced the use of 3D in 3DS games and every 3DS model to date has included the 3D slider however it is also unclear how marketing a entirely non-3D model may shape future 3DS game development.

With kids now becoming more familiar with iPads and laptops at an early age, this could be an opportunity for Nintendo to appeal to a younger fan base and capitalise on the growing popularity of  devices such as the Leapfrog LeapPad,  although a disparity in game pricing will probably still remain.

Early reports suggest that the console feels slightly cheap yet sturdy and the screens look to be of the same size and general quality of the original 3DS.We will get to know more in the coming weeks but chances are that this is just another side line by a company well versed in re-releasing their hardware than a clear indication of Nintendo giving up on 3D.

A proud member of the Geek Pride video games editing team, Sai can currently be found trying to get through his Christmas games backlog (and failing miserably at it).
You might also like
2ds3DSAp Games