Sooooo, yeah. Apparently the Tim Burton directed, Johnny Depp-starring movie Sleepy Hollow was successful enough for someone to come up with a hair-brained idea to make it into a series. No that sentence alone isn’t too bad… however setting it modern day, with a 250 year old Ichabod Crane? Hmmm.

Unfortunately the series doesn’t involve Burton or Depp, but it does involve the writers of Star Trek: Into Darkness, Roberto Orci & Alex Kurtzman which is something at least. After a little digging and watching the trailer, I’ve found that Mr Hikaru Sulu aka John Cho is also featured in the series, along with The Kurgan… I mean, Clancy Brown.

The story goes like this – Ichabod Crane was given the task of killing a particular redcoat by President George Washington, which he does by repeatedly shooting, then beheading him. 250 years later, and Crane is resurrected along with said redcoat, who becomes the headless horseman. However he’s not just the headless horseman – he is one of the four horsemen of the apocalypse. Crane is then used as a consultant for the police who are investigating a spate of… yep, you guessed it… beheadings. 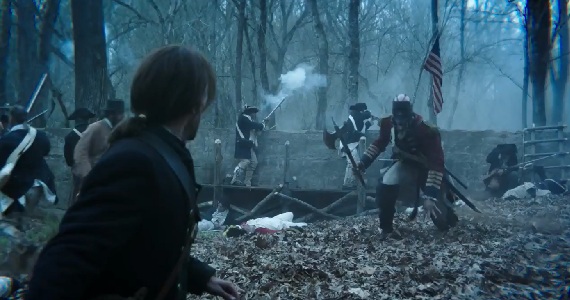 Crane confronts what will become the Horseman

Tom Mison will be playing Ichabod, while his present-day lisason with the police Abbie Archer is played by American Violet’s Nicole Beharie. The pilot (at least) will be directed by Len Wiseman, director of Underworld and the forthcoming Mummy reboot.

The trailer itself looks quite well-produced, but incredibly cheesy… making the most of Starbucks jokes and pop culture references. I swear though if someone doesn’t make a Highlander reference in this series I’ll be pissed, especially with Clancy Brown in at least the first episode.

If I’m honest this sounds less like a coherent TV series, and more like a comicbook written by someone on acid. I’m hoping Washington Irving himself doesn’t rise from the grave and decapitate whoever’s responsible. Still, I suppose I could be surprised and the series may end up being rather fun.

What do you think of the news? Do you like the idea, or are you also thinking it could go horribly, horribly wrong?

Ichabod Crane wakes up from the throes of death 250 years in the future to find the world on the brink of destruction and learn he is humanity’s only hope. From co-creators/executive producers Alex Kurtzman and Roberto Orci (the “Star Trek” and “Transformers” franchises, “Fringe”) comes the adventure thriller SLEEPY HOLLOW. In this modern-day retelling of Washington Irving’s classic, ICHABOD CRANE (Tom Mison, “Salmon Fishing in the Yemen”) is resurrected and pulled two and a half centuries through time to find that the world is on the brink of destruction and that he is humanity’s last hope, forcing him to team up with a contemporary police officer (Nicole Beharie, “Shame,” “American Violet”) to unravel a mystery that dates back to the founding fathers.

Movie and videogame geek, basketball player, guitarist, waffle connoisseur & expert in being a slacking bastard. You'll find me gaming on PS4 as "SpasmicPuppy" most of the time... I'm addicted to Destiny.
You might also like
Alex KurtzmanbreakingClancy Brown