Still feels lacking in some tutorial areas.
Getting the dice you want can be difficult without spending extra on singles.

Dice Masters remains a very fun game to pick up and play but, as with most collectable games, it will require a lot of time, effort and investment to play at a high, competitive level.

You may recall a while ago I talked about a game called Dice Masters. I talked about the concept of a “dice building” game and how the Yugioh and D&D starter sets held up compared to the comic book counterparts.

I’m now presented with the new Amazing Spider-Man two player starter pack (RRP £16.99) and a small pile of boosters (RRP £1 each, coming with two Dice and their corresponding cards, great value!) from various sets and I’m going to talk in more detail about how the different sets are interchangeable. 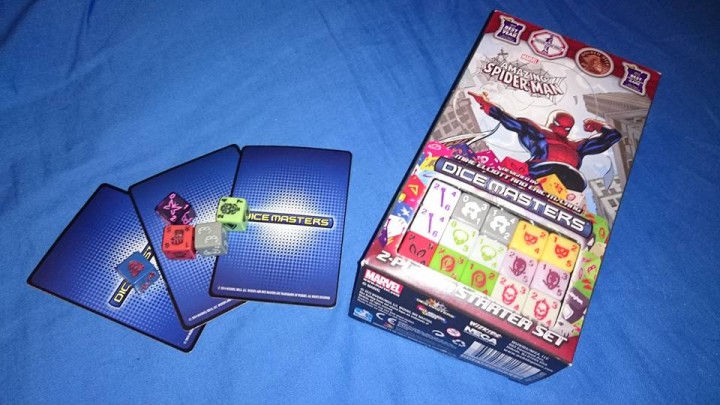 But first I want to talk about some subtle yet very noticeable changes from the starter set since my last review of the game.

Last time I mentioned how the rulebook and the “how to play” tutorials felt a little bit thin, a bit basic and that not everything was covered, leaving questions that I needed to look up online and ask in social media groups (which, there are some very good and friendly ones out there).

By comparison, the rulebook in the Amazing Spider-Man set has been fleshed out a bit more, which was very refreshing to discover; descriptions felt more detailed and in-depth, without being too heavy and alienating. There are still parts where I would like more detail, like a more detailed example of combat resolution, but as I say, the online community is fantastic should you require any help.

Also, with previous sets, the dice bags felt very waxy and generally unpleasant. Now, I know this is so they’re more durable, but they felt very bland overall.

With this set, however… I mean, look at them! 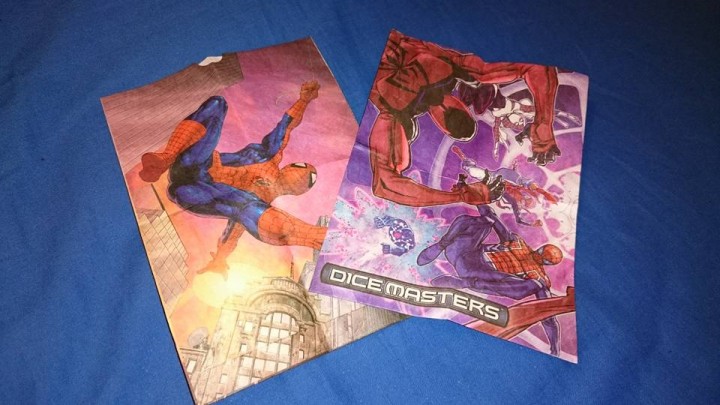 With this starter set, I’ve also got my hands on a few mixed booster packs. Some Uncanny X-Men, some Avengers VS X-Men and finally some Justice League (these ones excited me the most, as I hadn’t got any from this set previously)

Outside of the introduction scenarios, in normal games (referred to as “Constructed” play) players build a “deck” of twenty dice (not including your standard eight “Sidekick” dice), two “Basic Action” cards then a mix of eight Character and/or Action cards. These twenty dice are allocated to these eight cards. Every card must have at least one dice allocated to it and no more than the maximum indicate on the individual cards.

This is where the game gets its depth. With nine sets currently available and three more already scheduled for release in the first half of this year, Dice Masters has all manner of card/dice combinations that can be used. 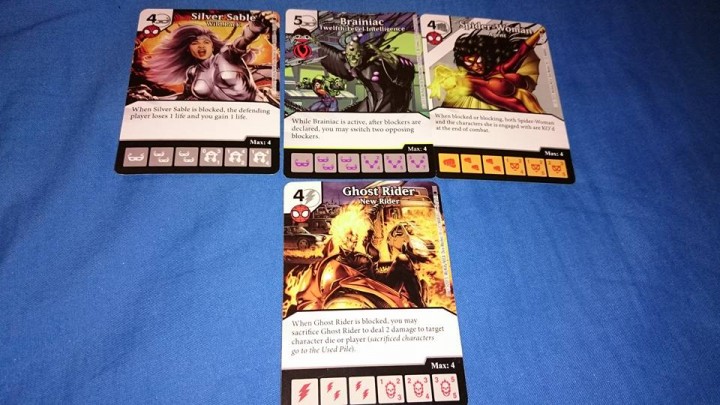 In this card layout, we have Silver Sable (Wild Pack), Ghost Rider (New Rider) and Spider Woman (Agent). All three of these character cards are from the Spider-Man starter set and all three of them have abilities that focus on being blocked by your opponent. Now, with the simple addition of Brainiac (Twelfth Level Intelligence) from the Justice League set, you have the option to switch where your opponent’s characters are blocking, which makes for a much more threatening line-up and will have your opponent second guessing their defence.

In short, while there are still some rough edges, Dice Master continues to develop as a collectible game. It’s quick, it’s enjoyable and it’s relatively inexpensive. This game has grown remarkably in popularity of late, so I would definitely recommend finding either a local play network through your gaming outlet of choice or Esdevium’s handy dandy store locator. Or you can come and join the online community on Facebook here, or here if you’re specifically UK based.

Until next time, I’ve been and shall no doubt remain Craig.

Craig has been raised on geekery from a young age when his Mum introduced him to Star Trek the Next Generation on TV as a kid. Since then, he has gained a wide love of all things "Geek", be it books/comics, cinema or gaming in all formats. He has a particular keen interest in all manner of RPG, be it on a tabletop or in a field larping.
More Goodness
collectablesdice mastersmrcraiggy