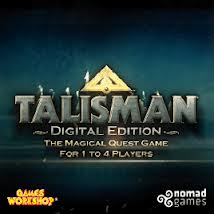 Good news for fans of Game Workshop’s classic board game, Talisman; a digital version is due to be released this summer. Developers Nomad say the game will use the 4th Revised Edition rules, include a multiplayer mode for 2-4 players and AI opponents will also be available for those playing solo. The board game also had expansion sets available and these are also planned for the digital version, to be available post-release.

Here’s a trailer for the digital version:

This isn’t actually a Kickstarter project but Nomad still needs your support; mainly to get it on Steam. Simply follow the link to the Greenlight page below and select “yes” in response to the question: “Would you buy this game if it were available on Steam?” It’s as easy as that.

They also have a Kickstarter-style pre-ordering system of the full digital version and if you can’t wait until the summer for that, then you can already buy the prologue game, which is a single-player only version; there’s also a demo for it, if you want to try it first. For these and more details on the game, just follow link below.