Now, it seems that lately we’re all getting sequels and prequels and remakes and reboots and I’m sitting here, wondering if somehow we’re starting to run out of original ideas.  It seems like most shows we’re watching right now have started as shows some thirty or more years ago or as a different media: comic books, books, cartoons. Not that I mind; sometimes it can be absolutely fantastic to get a new version of something created when special effects were less then stellar and people’s haircuts were bad enough to defy common sense. But is it always necessary?

A few days ago I stumbled on a trailer of a show that actually looks interesting – The tomorrow people. I’ve got a little place in my heart reserved for shows that involve mutants and the next step in human evolution stories, so you can imagine my happiness. And then, as the trailer slowly played out, I couldn’t shake the feeling that I had seen this before. But where? A while back I ended up in the corner of the internet that had the 1995 version of it and it was bad. I’m sorry, it was. The story line was much like the one from the original ’70s show, however the special effects looked like they had been hand drawn by a baby and the acting did little to impress me. The new, and hopefully improved, version of the series will be available on the CW, come this fall and I’m having high-hopes for it. For those of you that don’t know anything about it, here’s the gist: 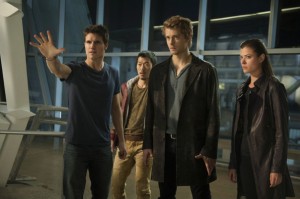 People are starting to change, evolving into something different, but not necessarily better than the average human. However, when they develop powers, such as telekinesis, telepathy and teleportation (and unlike with other shows featuring mutants, every single one of the tomorrow people has the exact same abilities as the next one), powers that a lot of people believe no one should really have, an opposing force, determined to eradicate them is formed. We’ve all known this story, don’t we? It’s why I’m hoping the new version of this show will have a twist, something to keep me glued to my screen whenever it comes on.

So far, the cast is formed by Robbie Amell as Stephen, the main character of the show and the one that supposedly can save the race of the tomorrow people from extinction, Luke Mitchell as John, the leader of the underground movement, Peyton List as Cara, the mysterious woman that whispers in Stephen’s mind until his powers start emerging and Mark Pellegrino as Dr. Jedikiah Price, who based on the trailer we can identify as the antagonist. It seems Mark Pellegrino loves playing bad guys, after Lucifer on Supernatural, another CW show and Bishop in the American remake of Being Human. It almost makes me want to see him as a good guy, doing good guy things, like saving kittens and feeding puppies. Most of them, bar Pellegrino and List are virtually unknown to the public at large. Luke Mitchell gained his fame from appearing in Australian soap-operas, Robbie Amell, while quite an accomplished actor is better known as Stephen Amell’s brother, now that Arrow rose to fame, but hopefully that won’t make people turn their nose at what has the potential of being a good show, albeit a little clichéd.

Until the fall when this new series will be launched – and I’ll be able to offer a more informed opinion on it- along with a few others meant to refresh the CWs rather tired line-up as of late, here’s the show’s trailer to give you a better understanding of what this show is all about:

What's there to say about me? I love the sci-fi and fantasy genre when I read, but I am in no way limited to that alone. I do think Frank Herbert deserves a statue for his writing(if there is one, point me in that direction, please). I enjoy writing quite a lot, but I am also kinda lazy. If you want to make me happy give me books or Doctor Who collectibles. Or a real TARDIS, in which case I will love you forever.
You might also like
breakingluke mitchellmark pellegrino