Answering this question isn’t an easy one, as Defiance isn’t just a game, but also a TV series made for the SyFy Channel. I’ve had the pleasure of playing the game, but unfortunately I can’t comment on the series yet, besides what brief clips I’ve seen floating around the interweb. However, my initial tentative answer to this question would be yes, and what follows is the reasoning behind my answer. 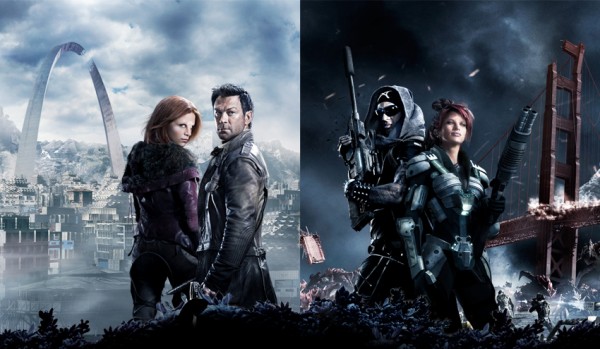 Defiance centres around the TV series, due to debut on April 15th. It tells the story of a race of aliens called Votans who have come to Earth seeking refuge following the destruction of their own solar system. The negotiations between the humans and Votans broke down, resulting in hostilities, and during the ensuing war the Votans deployed terraformers which radically transformed the surface of the Earth, as well as the animals and plant life. After nearly a decade of conflict, each race realises they’ve basically screwed themselves over, so decide to work together to focus on survival. The series uses small-town lawkeeper Jeb Nolan (Grant Bowler – True Blood, Lost) as its protagonist, and follows his struggle to maintain the peace in his former childhood stomping ground of St Louis, which is now a refugee camp known as Defiance. 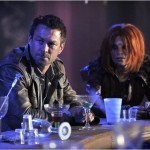 The series itself looks to be potentially quite epic, with a Firefly vibe fused with Falling Skies and Gearbox’s Borderlands game. From the trailer, the tone and atmosphere look to be quite fun, and I must admit I’ve always been a sucker for most series set in dystopian futures.

My impressions of the series are quite good- it’s the sort of thing I’d probably watch without the extra component of the videogame… but then I’m a fan of series like the aforementioned Falling Skies, along with shows like Fringe, Continuum, Battlestar Galactica and way too many more to mention.

OK, so what makes Defiance as a TV series stand out is that there is an accompanying MMORPG that runs alongside it, developed by Trion. What’s even more interesting is that it’s not just a tie-in… both the game and series are linked… so what happens in-game affects the TV series, and vice-versa. I don’t think this will be major plot points like character assassinations and the like; the effect the game will more than likely have will be environmental, for example if a particular race controls a certain area in the game, that information will transfer to the series… However that is just speculative at this juncture- we haven’t had this confirmed properly yet. 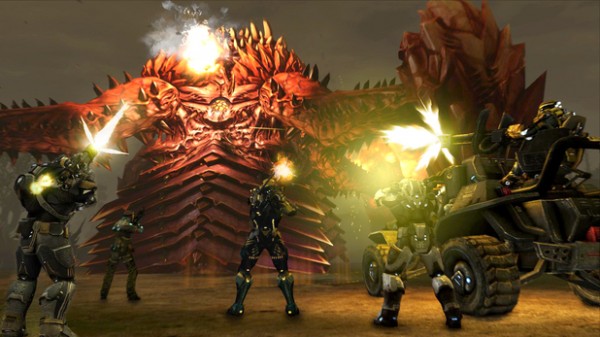 Looking at the game of Defiance is a bit more clear-cut thankfully, as I’ve been able to have a tinker with it, and get a feel for how it will play and what to expect. What I’m happy to report is that it’s pretty fun, bar a few small glitches which I’m sure will be ironed out before release (it is in a beta phase at the moment).

If I were to describe the game in a brief sentence, I’d say it was “a fusion of Gears of War and Planetside with a bit of World of Warcraft thrown in for good measure”. When you initially play the game, you’ll instantly relate it to Gears of War. You have the same over-the-shoulder point of view and a very similar (if not identical) control system- bar the taking cover mechanic and aim lock-on.

When you first start the game, you’re treated to a cinematic which sets the scene before you get the opportunity to create your character. You’re on a transport ship with civilians and military personnel, and are introduced to the commanding officer and a man called Karl Von Bach who are having a bit of a barney about equipment and such. It turns out that Von Bach is the CEO of Von Bach Industries (fancy that!) who employ “Ark Hunters”- these are basically mercenaries that are tasked with searching for and retrieving sophisticated alien tech… and guess what? You’re an Ark Hunter.

You actually get briefly introduced to the TV series’ main protagonists Jeb Nolan and Irisa (albeit briefly) before the ship gets fired upon, and you’re forced to get in an escape pod and be blasted down to the planet’s surface. 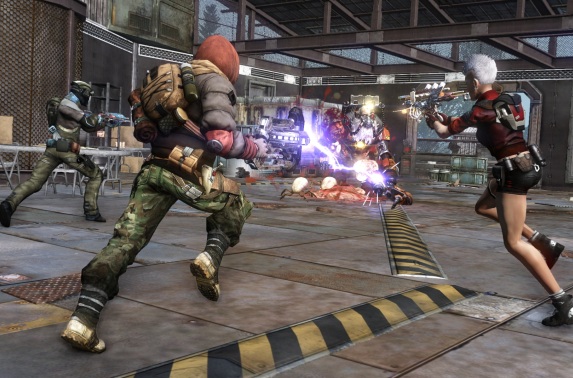 Character creation is pretty basic- you can choose an Origin -basically a Human or Irathient- in the sex of your choice. You then choose your character class- these boil down to an assault rifle soldier class, a sniper survivalist class, a shotgun-wielding nomad class and a heavy machine-gunner class. Adjusting the way your character looks is also limited to about nine different skin colours and noses; you don’t get a say on your hair or build, so don’t be expecting levels of customisation like City of Heroes. The reason there aren’t many options in terms of customisation is because there are massive battles in the game, and rather than getting the servers to worry about what the players look like so much, they’re opting for stability.

During my investigation of game menus (which was pretty intuitive to be fair… and I was playing on the PS3) it seems that you can swap your “loadouts” from one to the other. So it seems you can have a Sniper class build, as well as a Light Machine Gunner build and so on. This only looks like a build for your gear though- if you want a totally different build for your acquired abilities, you will need to “respec” and re-assign your EGO points.

Speaking of EGO, once you’re blasted to the Earth’s surface and you’re released from your escape pod, you start to writhe around in pain a bit until a Cortana-esque female hologram appears – this is the manifestation of the EGO or “Environmental Guardian Online”. This is a symbiotic, neuro-muscular bionetic implant developed by Von Bach Industries which allows the player to develop certain abilities. When I played as a Survivalist sniper class I could choose a cloaking ability, an increased bullet damage ability, a speed abilitiy and a decoy ability. What is really cool is that when you get your first EGO point, you’re stopped and put into a simulation by EGO and it demonstrates all four abilities in a little tutorial before you make your choice. That way instead of making a blind skill tree decision like you do in most MMOs, you can actually make an informed choice. 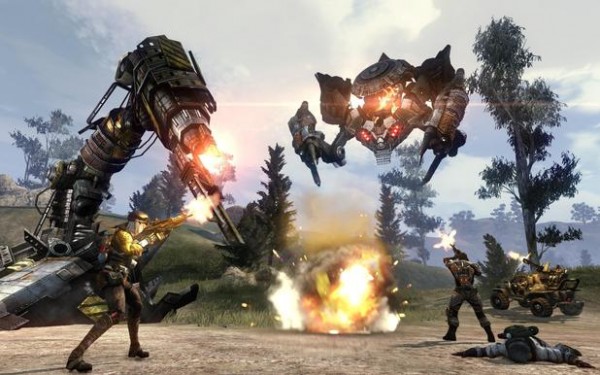 Character progression in Defiance seems quite swift, and it doesn’t drag between levels… usually if you’re not leveling you’re acquiring new gear to play with anyway, so you’re not bored as you traverse the new surroundings of what used to be Earth. As you wander around, you’ll bump into enemies aplenty… there are hundreds of the little bugs with teeth. I say little- if these things were real they’d probably be able to rip your leg off without too much trouble. You also bump into a lot of Mutant Riflemen too- one of the first missions is to search a crash site looking for the CEO of Von Bach Industries, and there’s a load of Mutant riflemen and snipers around… and they rarely miss.

The gameplay and combat is very much a “twitch” mechanic like a first-person shooter. I had a pistol and sniper rifle and flicked between the two at will- but there is no aim lock-on, which is fairer when it comes to PvP, but I found a little annoying with the usual PvE play. I didn’t have any issues with the combat at all, but then it’s all very standard as far as third-person shooters go.

You acquire missions through your EGO hologram, and through NPC’s in-game, and the waypoints and objectives are marked on your minimap with ease too… everything is very much as I’d expect from a Twitch MMO, and it’s done very well. The only slightly irritating glitch I came into contact with (besides some slight graphical clipping) was one whereby if I walked to the right, then let go of my PS3 joypad, my character continued to walk to the right… I only really got irritated with this during combat, but it happened rarely when I was ADSing (aiming down sights).

Altogether I’ve enjoyed my time in Defiance, and I’m looking forward to the TV series debut on April 15th… which I think I’ll be watching regardless of whther I get my hands on a retail copy of Defiance. The game itself will be available for the Playstation 3, Xbox 360 and on the PC via Steam from April 2nd.

Have you played the Defiance beta? What did you think of it? Will you play it when the game goes live? Let us know and comment below!

Movie and videogame geek, basketball player, guitarist, waffle connoisseur & expert in being a slacking bastard. You'll find me gaming on PS4 as "SpasmicPuppy" most of the time... I'm addicted to Destiny.
You might also like
Battlestar GalacticaBSGDefiance