What MacGyver Taught Me. (and lots of other people probably) 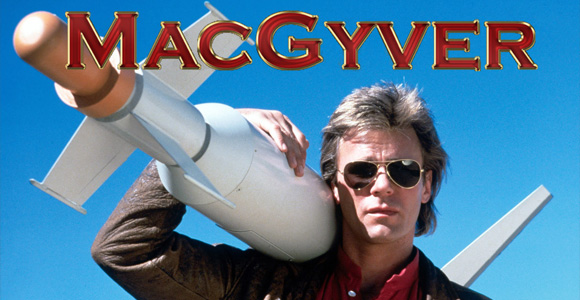 Angus MacGyver is one of my all time heroes. He has had a huge influence on the way I have lived my life and how I treat people. He is the reason I wore a bomber jacket as a teenager, the reason I had a Swiss Army Knife, and the reason I have never killed anybody.

I have a lot to thank him for. Here are some other things I learned from him.

Mullets CAN be cool.

I actually never realised that Mac’s haircut was a mullet until a few years ago. I know some of you might wonder how on Earth I could have been so very silly, but just read on ok, and I shall try to make you understand.

MacGyver was, and still is, the coolest cat that the late eighties/early nineties ever saw. Now, how could someone so very cool have such an uncool haircut? He couldn’t possibly, could he?

I was a very young human when MacGyver first graced our television screens to show off his amazing magical science skills. I wouldn’t have even known what a mullet was back then. And as I grew older and from time to time noticed real life people wearing mullets, how could I have connected those crazy hill-billies with the coolest guy on TV?

How could I have thought, ‘oh wow, that guys dreadful haircut looks very much like MacGyvers’?

Well obviously I couldn’t, and I know that at least some of you will know where I’m coming from with this. MacGyver had hair like Riggs from Lethal Weapon, and David from The Lost Boys. Cool hair. Not horrible hair that made him look like a crazy hobo.

So if someone mentioned mullets to me now (I don’t know why anybody would) I would probably first say something like, “ew, the laughing stock of the haircut world, haha, mullets are so silly”… but then, I would think of Mac and his way cool hair and I would say, “wait a minute, you know, mullets CAN be cool after all.”

And then I would nod wisely.

Runner boots are the best footwear.

When we saw MacGyver wearing those snazzy runner boots, we all wanted runner boots. And when we got them… Oh my word, all that lovely ankle support. And the comfort! Putting your new runner boots on was like shoving your feet inside two marshmallows.

And remeber how cool you looked when you wore them with your denim jeans and your denim jacket? Yeah. You know you rocked that look.

And a bottle opener, and a screwdriver, and a corkscrew, maybe a tweezers, a toothpick, a reamer, and probably lots of other useful things as well. You never know when one of these will come in handy to make a bomb or grow some vegetables, or even fashion a fancy new ballgown from some old dog food bags and baked bean tins.

I always carried a knife growing up. I had a really cool penknife for a few years but I eventually got a Swiss Army Knife, and I was always opening screws or trying to open tins and bottles with it. I don’t think it worked very well for anything. But it was still awesome.

Science is a good life skill.

Everybody likes science, right? What’s not to like? When you do science you get to experiment, mix ingredients together and make all sorts of things happen. Chemical reactions are the best kinds of reactions. There are exciting smells, and smoke, and sometimes there are explosions, some minor burns, the loss of a digit or two. Brilliant.

But who knew you could use science in everyday life? If you’re on a fishing trip with your old grandpappy and assassins come to kill you, what do you do? Use science of course!

And what about when you’re in the jungle and killer ants are coming to get you? Science again? Yep.

Need to battle local drugdealers in your old hometown? You know what to do by now.

Everybody needs an arch enemy. A nemesis if you will.

We don’t want the world getting all out of whack now do we? For every yin, there must be a yang. To have light, we must have darkness… Fire, ice. Male, female. High, low. You get it, right? Opposites.

Murdoc was MacGyvers opposite. He was the evil genius who tried and failed so many times to outwit MacGyver. My favourite episodes were the ones with Murdoc in them, he just made everything so exciting. You never knew if he was going to win this time and actually kill Mac. He never did of course, but he always had me on the edge of my seat.

Beat people up, knock them out, just don’t kill them. There is always another way, murder is never the answer, especially not when you know how to do science.

When MacGyver was a kid, one of his friends was killed in a gun related accident, and that’s why he never, never uses guns. Never.

Except for in the pilot episode.

Sarah Byrne
I've begun to watch a lot of daytime television. I really need a job.