Why Aren’t You… Playing Couch Co-op? 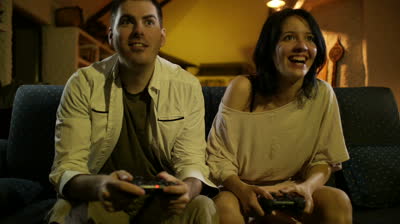 Let me take you back a while, to the early 2000s. George W. Bush was just starting to show that massive head injuries are no barrier to the highest office in the world, Linkin Park were crawling in all of our skins, and many people still had modems that screeched down the phone lines like a scorned ex.

Most importantly, Microsoft’s first foray into the console market, the Xbox, was launched. We’d all heard about this new machine for years in gaming magazines, so it was a major moment in our young gaming lives, a whole new console from the people responsible for all the PC gaming we’d enjoyed on good old Windows 95 and XP.

One of my best friends at the time was lucky enough to get an Xbox on release. His father texted him on his Nokia 3210 that the package had arrived, and he invited me round to his house to try it and this new game Halo out. Having ordered two controllers, my friend wanted to play co-op.

This was a strange idea for us, as most split-screen games at that time, such as Goldeneye, were competitive, but here was an option for the two of us to play together against the hordes of enemies. I took the player 2 controller, nodded to him, and we prepared to save the Universe.

This kind of co-operative gameplay is known as Couch Co-op now, due to the increases in online speeds and the (generally) reliable PSN, XBL, and Steam-like services gamers can now access  changing the way we play to be exclusively online. And I’m as much of a Sunbro as the next gamer, but there’s something unique about Couch Co-op. Playing Halo through, the two of us, that afternoon and evening was an amazing experience, and we went to bed smiling about our experiences.

And I don’t think enough people have had this joy.

Anyone who ever played split-screen games back when they were your only option, or who has a spouse they share games like Castle Crashers with, will tell you that having competitors or comrades in the same room changes the experience. You can actually turn to your friend and laugh in their face, or high five, or pause to try and stop choking on your drink.

A good friend of mine had  a LAN party for their birthday, eight people playing on two Xbox 360s and two TVs in the same room. We played Left 4 Dead 1&2 primarily, and it was one of the best parties I’ve ever been to: the shouts of fury, the hilarity of sneaking up on a friend and choking them with your distended tongue, just making it through the end of a level by the skin of your teeth… these are memories I’ll have for ever, and it wouldn’t have been the same in an eight person party held across the country.

Whilst a lot of games nowadays are built around online gameplay, there are still some which work for Couch Co-op. Diablo 3’s console release, the aforementioned Left 4 Dead, and the excellent Borderlands series, to name a few. The idea isn’t dead, though it seems to be wounded. Which is sad, as beating a challenge together like this is the closest most of us will ever get to the Saturday morning cartoon feeling of triumphing over evil throught the power of friendship.

If you’re anything like me, it is an effort to get dressed, put all your rubbish into a bin, and fend off the dire rats which have infested your kitchen in order to entertain guests. But it’s worth it: you don’t get any lag, you get a completely different dynamic to online play, and, if you know your partner(s) well, you could play drinking/strip co-op. So, tell me, why aren’t you playing Couch Co-op?