It’s the end of the first week so I present you with my first weeks round up. I have tried to be funny but I decided that if I don’t try too hard then I can’t epically fail. Also, I don’t think it’s quite acceptable to say that The Prestige is about Wolverine and Batman battling it out using illusions while Alfred gets caught between the two (because Alfred has a heart of gold *breaks down remembering TDKR*), especially as that’s NOT what the film is about (although that is such a good idea for a film… Alyson, get back to the job at hand). Yes, sorry so here are this week’s watched films with a brief summary of the film and my thoughts. Feel free to disagree and feel even freer to tell me why you do.
Films watched: Memento, Zodiac, Wreck-it Ralph, The Prestige, Sixteen Candles, Ghost busters and Stay. 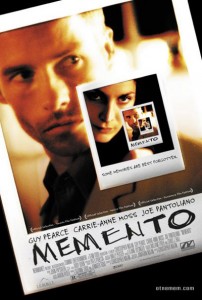 I started off with a Christopher Nolan film in the hopes that he wouldn’t disappoint me and he certainly didn’t. The movie follows Leonard (Guy Pearce) as he hunts down his wife’s killer whilst suffering memory loss problems. The film is shown in short sequences using two timelines, one going forward and one going back which sounds hard to follow but definitely adds something to the film. Memento is full of twists and surprises and definitely keeps you interested and guessing the whole way through. The story is fantastic, the acting is great (although Guy Pearce continuously reminded me of other actors throughout the film which slightly distracted me) and, as you would expect from Nolan, the directing is great.

In short: This film kept me fully interested, continuously guessing whilst immersed in the story. A great film to start the month off with. 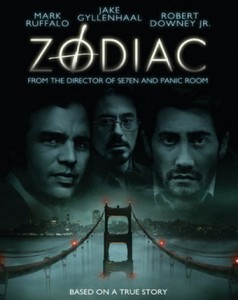 The storyline of this film, based on a true story, follows the Zodiac killer and the attempts by police (including Mark Ruffalo’s character, not the Hulk unfortunately) to catch him. Robert Downey Jr. and Jake Gyllenhaal work for a newspaper with Downey being a crime reporter (again, not Iron man unfortunately)  and Gyllenhaal being the cartoonist. Although the performances were of a good standard, each actor seemed to play their usual kind of character so the acting standard wasn’t surprising. The storyline is definitely interesting but with about an hour and a half of setting the scene before the action starts, it feels a little long winded. The film as a whole is 2.5 hours which, in parts, was hard to get through (it would have moved a lot faster if it was Hulk and Iron man). I really wanted to enjoy this film due to my own interests in forensic linguistics (which is touched upon in the film) but I was left a bit disappointed.

In short: Overall a good and interesting movie but shame about the length. 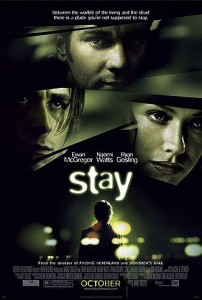 The storyline follows a psychiatrist trying to prevent the suicide of one of his mysterious patients while his own mind starts to play tricks on him. Stay seems to be quite unknown even though its cast of Ewan McGregor, Naomi Watts and Ryan Gosling is pretty strong and the acting, particularly by Gosling, is great. The reviews for the film state it as mediocre but I have to say that I really enjoyed. I was hooked from the start and desperate to know the meanings of everything. The end was a bit anticlimactic but the directing and cinematography really had me captivated. I was clueless, confused and absolutely loving it. I imagine this film would be better to watch with someone else so that you can have a discussion about the film afterwards.

In short: An interesting film with good acting but a possibly predictable ending. 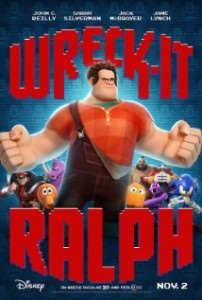 Wreck-it Ralph focuses on a video game villain who is tired of being overlooked for being bad and wants to be cherished and good. Wreck-it Ralph is full of fun and suitable for adults and kids alike. Filled with references to video games, it’s good fun for geeks and the references to food are also fun but leave you feeling hungry, so make sure to have snacks prepared. The film is uplifting and a good ride with fun characters. The graphics are great and immerse you in a world of bright colours. I have to admit there was a bit in this film that had me emotionally hooked but the rest was bright and fun. I know other geeks who have seen this film and loved it, so definitely worth a watch.

In short: A colourful and fun journey into the world of games. 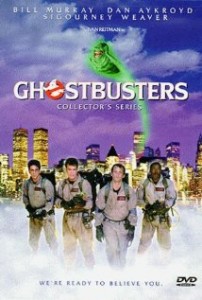 I’m sure I don’t really need to tell you what Ghostbusters is about (the title’s pretty self explanatory too) but for those who don’t know, Ghostbusters follows a trio of unemployed professors interested in the paranormal, who set up a ghost removal service. I was a bit concerned that I wouldn’t enjoy the film seeing as I had high expectations because of its reputation but I had nothing to worry about. Yes, I know, I should have seen it before. The last and biggest paranormal entity had me laughing out loud at 3a.m., which was totally worth risking waking the house up for, and of course Bill Murray is his usual great self.

In short: Good 80s comedy with a fun twist. 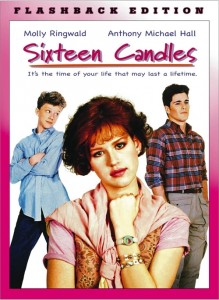 When I set myself this challenge I had already decided that I wanted to watch some more John Hughes movies. Having already seen Ferris Bueller’s Day Off and The Breakfast Club I decided to watch this movie. Sixteen Candles starts on the main character’s birthday and follows that day and the next with her disappointments, her embarrassments and the start of her life as a 16 year old. It has the usual charm of a John Hughes movie, including breaking the fourth wall and following the ins and outs of teenage life. It’s not overly romantic so any skeptics won’t need a sick bucket. I wouldn’t score it on par with the films I’ve already mentioned but I did enjoy it.

In short: Funny, cringe-worthy and  with an ending able to provoke a single girl to be completely jealous.
Rating: 7/10 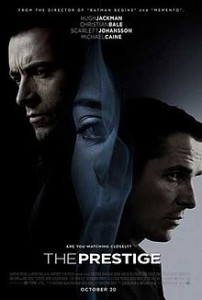 I hadn’t heard of The Prestige which surprised me when I saw the impressive cast and of course Nolan as director. The Prestige forms the third part of a magician’s trick and as you can guess from that clue, the film centres on the rivalry of two magicians and the ultimate trick.

It’s definitely a film that requires a few viewings to totally understand the complicated story twists (or a quick cheeky search for the meaning online) but when you fit all the pieces together you are presented with a great film. The cast are great, of course, although I admit at first I chose to instead picture Wolverine and Batman, and Alfred, although that got confusing because Bale’s character was called Alfred, anyway, I told myself to concentrate and I’m glad that I did. Although it’s quite dark and serious, its conclusion is brilliant and definitely surprised me cementing its place as a film that you can discuss for a good while with your fellow viewers.

So those were this week’s films, a bit of a variety there I think. If I had to choose a film or two to recommend I’d definitely say Memento and… it’s a tossup between Wreck-it Ralph and The Prestige. Personally I really enjoyed Stay but due to the other varying reviews, I’ll avoid putting myself out there for people who’ll complain that they thought it was terrible (it’s myyy precioussss).
Check back next week for the sequel 🙂

I'm a movie lover of all genres, particularly comic book films, as well as some television shows such as Community. I enjoy fiction writing and blog writing and I sometimes dabble in reviews.
You might also like
80sanimatedchallenge