Rochdale’s Wheatsheaf Centre was today the backdrop for day two of Dale*Con, Rochdale’s only Sci-Fi Convention. I arrived bright and early with the family to find stalls and props set up and already doing a brisk trade. Comic books were being sold, photos were being taken of happy geeks in front of a Tardis, I could already tell that the organisers had gone to a lot of work to convert this busy shopping centre into a veritable shrine to geekness. I made my way upstairs to the convention area proper and perused the Dale*Con merchandise on sale. Flanked by Stormtroopers and a very imposing Darth Vader, Dale*Con was certainly ticking all the boxes so far. Just inside I bought a couple of raffle tickets from Supergirl and BOOM – two wins! One Yoshi-shaped candy dispenser (ages 3 and up) and one signed photo of Ken Coombs from Star Wars! Oh, Dale*Con, you do spoil me. 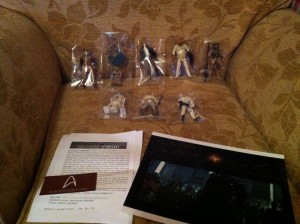 I spend the next few hours watching the cosplayers and picking up some bits and pieces from the stands including a toy R2D2 from Return of the Jedi that fires out a lightsaber. And I mean fires. I almost lost it in a bottle warmer in Mothercare.

Today’s big draw was Craig “Dave Lister” Charles who arrived stylishly late smoking an electric cigarette and wearing a huge smile for his fans. A queue materialised almost immediately along with a funky DJ and the man cracked on. The room was soon full of people waiting to meet the star but Mr Charles greeted each one like an old friend and no one seemed rushed  or unsatisfied by their close encounter. True class.

Unlike larger events which can be a bit overfacing, Dale*Con had an amazing intimate atmosphere; you were never more than two feet from a celebrity, a star fleet officer or a Doctor and everyone was truly friendly in the was only people who are doing what they love can be. Dale*con 2013’s grand experiment is over and, in my eyes, it was more than good enough to warrant a Dale*con 2014.Although maybe with a bit more Boba Fett next year please…

Thanks to Martin Ballard and the Wheatsheaf Centre for a fantastic day as well as Manchester Starfleet, Novare Alliance,  and everyone else who showed their geek pride!

Check out our video blog coming soon for more highlights and interviews.

Just some of the memorabilia on display

Trapped in the past, Ben Fee finds himself leaping from life to life, putting things right that once went wrong, and hoping each time that his next leap will be the leap home..........
You might also like
ben feebreakingconvention